What did you think an artist would pick up on from your poem?
Poet Benjamin Grossberg: “Wandering” is a list of objects, and objects transformed. I expected the artist to pick up on that, and I think she did—transforming a map/letter into a rocket ship. She applies my simile to a new object.

What inspires you in this poem?
Artist Jennifer Bevill: Ever since the original “Star Wars” movie came out and I saw it thirteen times that summer I have loved anything sci-fi. So that was an immediate connection for me. And I work with a lot of found objects, so the fact that this alien was building his spaceship out of spare parts was another. I also love the tone of the poem. It’s very matter-of-fact—need to get home, need spaceship, must build one, what’s handy?

Did the visual artist refract any element of the poem that made you see the poem differently?
Poet Benjamin Grossberg: Not so much, but I especially like the cancelled stamp as a sort of national flag.

What surprised you about this collaborative piece?
Poet Benjamin Grossberg: Jennifer Bevill’s work reminds me that I am not in Kansas anymore. In terms of voice, irony, and the use of the line, the Space Traveler poems (there are about fifty!) are very different than the work in my first two collections. In those books, I had been much more about grace, balance, and symmetry. I’m not sure what I’m about now, but it’s not those things. For a while I joked that I’d discovered modernism, only a hundred years too late. Jennifer’s sculpture reflects back to me the stylistic/aesthetic reality of these new poems. The sculpture that represents them would not be cast in bronze and replicated in marble (see my answer to the next question); it would be a folded letter, copper wire, toothpicks, and a strategically placed stamp… an art that has no hesitation about using every-day materials—that does not distinguish between the objects we use for living and the objects we use to represent that living. I’m not sure how comfortable I am with this aesthetic bent—in my poems or in Jennifer’s sculpture—but what can one do? You’ve got to go with where your head is.

What surprised you about this piece, once you saw the artwork and poem together?
Artist Jennifer Bevill: From the minute I dibsed this poem, I saw the artwork as a sculpture. I wanted to actually build the spaceship. And I had made the little tripod to put under the ship mainly as a prop so I could photograph it and it would kind of be elevated as if it was flying. But when I saw the final layout and read the poem again the tripod made the spaceship look kind of like that old car that you’re rebuilding “some day” in your garage or front yard—the one that’s up on blocks and has no wheels and kids play in, and birds nest in?

Have you ever written work that has been inspired by visual art? What was that experience like for you? Why were you inspired to do so?
Poet Benjamin Grossberg: There is a sculpture I love, a Roman copy of a lost Hellenistic piece, called “The Dying Gaul.” I love the sculpture because it is classical beautiful—balanced, detailed—and because the man pictured (the Gaul) is himself beautiful. But mostly I love it because of how easily the sculpture elides sex and death. For years I could barely separate those myself, and the sculpture seems to embody and make lyrical something I couldn’t really understand. So I wrote many poems about “The Dying Gaul.” None were good enough to make public—maybe because there was too much I wanted to say, or because I was too aware of what I was trying to say—but learned that such collaboration isn’t easy. My hat is off to Jennifer.

When you begin a piece of visual work (or, if that’s too broad, when you began this piece), is it color, shape, or some other aspect that you follow?
Artist Jennifer Bevill: Well for this piece I knew I was going to build the ship. In the poem, the alien was building the ship from bits of the house. Although I didn’t want my piece to be that literal, I did want to keep the same feeling. I had some little cardboard boxes in my studio and I started shaping them into a ship, letting the shape of the boxes dictate the cuts and folds. I didn’t want anything fussy or too planned out. I made a couple of others out of toilet paper rolls and those clear plastic container that come from gumball machines, but in the end I liked this one best. I sew a lot in my work and so I wanted to see if I could sew the ship together. I did, but I also used papier-mâché and some found papers, stamps, maps, to give it a little more solidity. And then the few beads kind of felt like stars or navigational points that might glow when the ship was out in deep space.

If you had to represent the broadside of “The Space Traveler and Wandering” with one word, what would it be?
Poet Benjamin Grossberg: If I had to do that I would sputter for a few minutes, and then shrug or grin when I couldn’t come up with something clever enough.
Artist Jennifer Bevill: Inspired

Read any good books lately?
Poet Benjamin Grossberg: I just finished The Shipping News by E. Annie Proulx. I like happy endings. Aside from that, mostly just mediocre books. But I usually enjoy those, too.
Artist Jennifer Bevill: One of my favorite books of all time, which kind of fits in here, is Cloud Atlas by David Mitchell. It’s a time travel story and has a breathtaking structure. It’s written kind of like the equivalent of Russian nesting dolls, one story inside another inside another. I love it. I also love writing, like Faulkner’s The Sound and the Fury, that you can’t look straight at to understand. You have to stand off to the side and look at it from another vantage point. The Sound and the Fury is kind of like a cubist book—all these different perspectives and happening simultaneously. It’s exciting to read and makes traditional linear writing seem boring.

Seen any good art lately?
Poet Benjamin Grossberg: I saw “Doubt” a few days ago. That scene with Meryl Streep and Viola Davis was as good as anything I’ve seen in a movie theater in years.
Artist Jennifer Bevill: There’s an exhibition at MOMA now called “Paper, Pressed, Stained, Slashed, Folded” that completely bowled me over. Two Rauschenberg “cardboards” were in the show that were just amazing in their simplicity. Most of the work was very simple, a sheet of paper and very little else. Not even drawing. Just what the artist did to manipulate it. It sort of put one toe over the line from 2-D work into sculpture. I loved it.

Anything else?
Poet Benjamin Grossberg: Just my thanks. To Liz and Mark, for involving me in this great project, and to Jennifer, for spending some time with me and “The Space Traveler.”
Artist Jennifer Bevill: I love connections with writing and art because, although I am an artist, and images are the language I think in, I love writing and being inspired by writing. This was a rich experience in that I was able to choose a piece of writing that really touched me and then make art from something a little more outside my own head than usual. It was fun seeing that the way I think could connect with the way someone else thinks. I’m grateful to Benjamin Grossberg for writing a poem with such wonderful imagery and feeling. 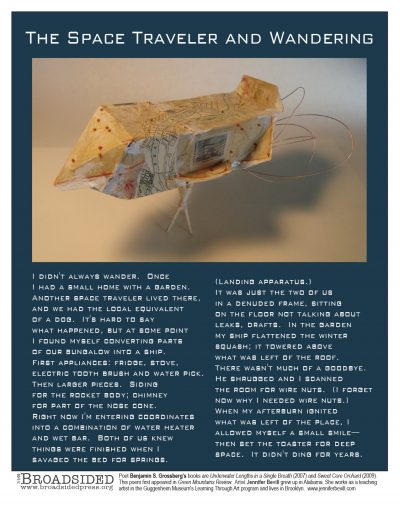 “The Space Traveler and Wandering” (PDF)

Poet Benjamin Grossberg‘s books are Underwater Lengths in a Single Breath (Ashland Poetry Press, 2007), and Sweet Core Orchard, winner of the 2008 Tampa Review Prize (University of Tampa, 2009). A chapbook, The Auctioneer Bangs his Gavel, was published by Kent State in 2006. He is an assistant professor of English at The University of Hartford, where he teaches poetry writing and Early Modern English literature. “The Space Traveler and Wandering” first appeared in Green Mountains Review. Other space traveler poems can be found in Cincinnati Review, Pool, The Journal, Natural Bridge, and Whiskey Island.

Artist Jennifer Bevill grew up in Alabama and studied at Parson’s School of Design and Teacher’s College. She works as a teaching artist in the Guggenheim Museum’s Learning Through Art program and lives in Brooklyn.