What made you think of Broadsided for this poem?
Poet Philip Metres: Liz graciously reached out to me, after reading some poems in Kenyon Review. I instantly looked for poems from the next book I’m working on, because I love broadsides and the word/image collaborations.

What inspires you in this poem? What drew you to it?
Artist Sara Tabbert: My image for “Trees in my Chest” was a concurrence rather than a response. I was working on this piece as I saw the poem, and as I continued to work they became entangled. I kept seeing the rib cage or chest in my tree, a kind of restricted, grasping form which seemed to reflect the wordplay in the poem. There’s probably a writer’s term for what Philip is doing with the words that are pulled out of other words but I don’t know it. I cannot say I understand all of it, but the ghost, the ember in December, the dark… a kind of peaceful melancholy of absence.

Describe your dream “Vectorization”—where, in your wildest dreams, would you most like to see this broadside posted in the world?
Artist Sara Tabbert: For some reason I keep seeing it on the wall of a dark wine bar or private club. Quiet, leather chairs, glasses of scotch or port. Meditative, a little lonely.
Poet Philip Metres: I love it when poems wind up on buses and trains, as in the New York subway system. I can imagine someone going through a dark time, in a dark night, who sees this poem and knows that they are seen as well, and that that longing is part of being human.

What did you think an artist would pick up on from your poem? Did the visual artist refract any element of the poem that made you see the poem differently?
Poet Philip Metres: I really wasn’t imagining any image, except for the images of the poem—rooms after rooms, the trees in my chest (really, what I think of when I see pictures of lungs). Sara picked up on the bleakness of the poem, which is really about the purgatorial experience of darkening days, midlife, asthma, and the distance of God. It almost looks like a tree whose branches are growing inward rather than outward, retreating from the world.

Did anything shift for you or come into new light once you saw the poem and art together on the page?
Artist Sara Tabbert: I think there is a starkness and a rueful half smile in both the image and the poem—things are what they are, let’s sit with them.

Have you ever written work that has been inspired by visual art? What was that experience like for you? Why were you inspired to do so?
Poet Philip Metres: Ekphrasis has been a favorite mode of mine as a poetry. Every single book of poems I’ve written contained at least one or two poems inspired by visual art, usually paintings I’ve seen in person at the Cleveland Museum of Art. Poems like “Installation/Occupation” (after Vera Tamari), “Hiroshima (A Panorama),” “Nicodemus Below the Cross (a Votive Ivory),” “For the Fifty,”—all from To See the Earth—, “Etruscan Cista Handle” from Sand Opera, etc. emerged from the magic thrall of wanting to describe the indescribable. When I was in high school, I took an Art History course and I became enthralled with visual art—Van Gogh and Hopper and Andrei Rublev and Vasily Vereshchagin are as important to me as any poet.

If this broadside were a type of weather, what would it be?
Poet Philip Metres: December’s advancing dark, after the leaves have fallen, and just before the snow has fallen for good.
Artist Sara Tabbert: A winter night.

Read any good books lately?
Poet Philip Metres: Birthright by George Abraham, A Theory of Birds by Zaina Alsous, Soviet Texts by Dmitri Prigov, Tussle by Paige Webb, Apeirogon by Colum McCann, He Held Radical Light by Christian Wiman, and Social Poetics by Mark Nowak.
Artist Sara Tabbert: I am always late to the party, but I recently read Kate Atkinson’s Life after Life and A God in Ruins and loved them both. The frustration and beauty of the story starting over and over and over.

Seen any good art lately?
Poet Philip Metres: I’m not sure if it’s “good art” or visual art, but I’ve been thinking about “The Artist is Present” (the performance piece and film), and how we artists might cultivate attention and intimacy.
Artist Sara Tabbert: I recently went to our main public library in Fairbanks for the first time in a while—much of my reading takes place through audiobooks and digital downloads, so I’ve been absent for a while. I was astonished at their collection; I think they’ve had a lot of significant donations from private collectors in the last ten years. Original Rockwell Kent paintings. Gorgeous Yupik masks. Work by the late Ron Senungetuk, who we lost recently, and John Hoover. I need to go back and spend some more time there.

Anything else? (Here, we invite the collaborators to invent a question, add a comment, or otherwise speak to what the questions so far have not tapped about their Broadsided experience).
Poet Philip Metres: This poem was written as part of a daily advent meditative practice. I’m grateful that it’s receiving this second life with Sara’s art! 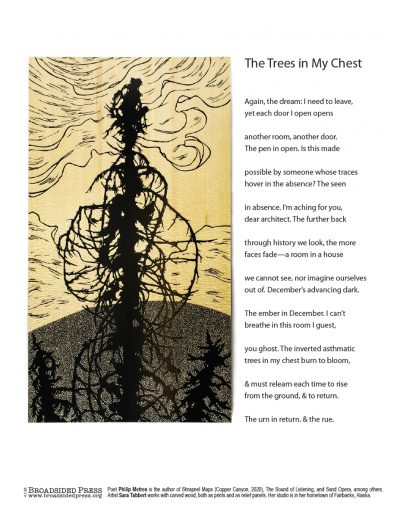 Poet Philip Metres is the author of ten books, including Shrapnel Maps (Copper Canyon 2020), The Sound of Listening (2018), Sand Opera (2015), and Pictures at an Exhibition (2016). His work has garnered a Lannan fellowship, two NEAs, six Ohio Arts Council Grants, the Hunt Prize, two Arab American Book Awards, and the Cleveland Arts Prize. He is professor of English and director of the Peace, Justice, and Human Rights program at John Carroll University. http://www.philipmetres.com

Artist Sara Tabbert works with carved wood, both as prints and as relief panels. Her studio is in her hometown of Fairbanks, Alaska, where she works full time as an artist. Her work ranges from intimate pieces on paper to large public commissions. She received a BA in studio art from Grinnell College and a MFA in printmaking from the University of Nebraska, Lincoln. Sara recently had a solo show at the Alaska State Museum in Juneau, and when the world rights itself, she looks forward to the upcoming residencies in Philadelphia and Maine.