What made you think of Broadsided for this poem?
Writer Marsha Pomerantz:  I’m curious about the meeting of image and text when the relationship is dialogue rather than illustration, and that’s what Broadsided pursues. I’ve experimented with combinations of text and photos of my own, highly unsuccessfully. I wondered what partnership with a visual artist via the editors might bring about. Two untranslatable media reaching out toward each other or peaceably minding their own business side-by-side.

I had collaborated with a visual artist just once before, more directly: the French painter and printmaker Claire Illouz made a book based on a poem of mine called “They Run.” We talked about it and I saw (long-distance) mockups of engravings and etchings, design and type treatment. It was gratifying to feel that my work was understood, even if it took me a while to realize that I had to relinquish “ownership” to allow the poem become part of a totally new work. My poem poignantly reincarnated.

What inspires you in this poem? What drew you to it?
Artist Amy Meissner: I loved the point of view of this piece, not simply hearing from a witch, but a dead one. I felt like I entered another plane of existence altogether and then I was angry with Hansel and Gretel.

What did you think an artist would pick up on from your poem?
Writer Marsha Pomerantz: I pictured the loosening of the bark, an unraveling or peeling. What had set off the poem was fallen birch trees in the woods of Western Massachusetts. To the extent that I had a work in mind in anticipation of an artist’s response, it was probably the head by Escher that’s composed of ribbons or bands with spaces between them. A recognizable form around a void, coming apart, as I recalled it. I see now that it’s called Rind.

When you began this piece, was it color, shape, or some other aspect that you followed? Did that change?
Artist Amy Meissner: The origin of the piece “Birth Rope” began when I found the length of marine rope washed ashore in Prince William Sound, Alaska. Normally we stumble across bright yellow, aqua, black, grey rope—most of it is garbage and treated as such. But this piece reminded me of dead flesh…I even laundered it, filling my washing machine with muck, and then it literally hung around in my studio for three years until I was clear on how I wanted to work with it, combining altered vintage textiles and silk to create a relic. “Birth Rope” considers women’s work in the context of birth—an impossible midwifery tool or the aftermath of trauma—a literal and emotional unmoored state, combining a slick insistency and a deeply abraded fatigue. Beautiful and terrible.

Did the visual artist refract any element of the poem that made you see the poem differently?
Writer Marsha Pomerantz: Yes, I think what Amy’s work emphasizes is the tightening, the twistedness (in various senses)—binding, ingestion, tangle—which is at least as present in the poem as the undoing that I had been focusing on. In fact the rope presents a balance between doing and undoing, which seems to me the source of its tension. I was expecting something two-dimensional, maybe a painting or print, and this textile construction, even in 2-D reproduction, feels like maximum menace.

What surprised or struck you once you saw the finished broadside?
Writer Marsha Pomerantz: First of all, the way the rope integrates colors that can be read as birch and blood, shapes that suggest limbs and roots. Nothing anthropomorphic. A knot, but frayed; twisted strands both coated and bare. Then, what the graphic designer did with it: vertical orientation that makes it dangle (danger of strangulation, with that knot!) and yet connect heaven, earth, hell. The text design is simple and stark, with sans serif type, and the justified margins contain it all, exacerbating the grimness. All together, it drove home how creepy and violent my poem was, as if in some way I hadn’t completely acknowledged it to myself. But being bad, I realized, had been very satisfying. Looking at Amy’s website, I wonder if there’s a parallel, but I wouldn’t want to cast aspersions!
Artist Amy Meissner: I loved that I was considering midwifery and women’s forbidden power at the same time Marsha was considering another type of witch. The two works combined feel striking and severe.

Have you ever written work that has been inspired by visual art? What was that experience like for you? Why were you inspired to do so?
Writer Marsha Pomerantz: I’m often impelled by visual art. Maybe it’s relevant that I tried painting for several years in my teens and gave it up. Not sure why ekphrasis appeals. The exploitation of something already “framed” out of the chaos around us that invites focus, re-translation. Among my experiments is a poem called “Inscriptions for Chinese Paintings,” written for nonexistent works, but each time departing from a very specific visual image. For me it’s in part an artist’s statement, yearning for the immediacy of the visual and recognizing the limits of “capture.” I’ve also tried two responses to Turner’s Burning of the Houses of Parliament, one that is more shapely and hews somewhat to the work, and the other that launches off it in a prose rant. I wrote the second one first.

How does literature fit into your creative life as a visual artist?
Artist Amy Meissner: I wish I could read all day, but I listen to audio books in my studio instead, then read craft theory at night. Attempting to write clearly about my work and thought process has been vital to expressing my intentions.

If this broadside were a piece of music, what would it be?
Writer Marsha Pomerantz: Can’t say what it is, but let’s aspire to the condition of a Shostakovich quartet. Insistent strands pulling against each other, then relenting, nowhere to quite settle, with rhythmic silences and plinking pizzicato, sometimes sweetness. (Note precise music vocabulary.) The syntax in “Witch” might be too conventional for my dissonant intentions, but Amy produced those ominous prickly hairs that point everywhere. Sweetness? When Hansel and Gretel come back.
Artist Amy Meissner: Something Leonard Cohen-ish.

Describe your dream “Vectorization”  — where, in your wildest dreams, would you most like to see this broadside posted in the world?
Writer Marsha Pomerantz: Not outside a kindergarten. On a birch tree in the middle of the woods. You never know who might happen by.
Artist Amy Meissner: Taped to Glenn Adamson’s refrigerator.

Read any good books lately?
Writer Marsha Pomerantz: A friend in Jerusalem (where I am at the moment), Gabriel Levin, has a new book called Errant, which includes a long poem in dialogue with works on paper by Tamara Rikman: “What Drew Me On.” It offers a universe of associations (including Plato’s music of the spheres) that were gradually teased out as he and Rikman lent each other their drafts by turns. A further turn: The British composer Alexander Goehr, with whom Levin has collaborated in the past, is working on a response in music. The conversation extends into a third medium.

One other work, less recent, but something I find haunting. The Hungarian writer Péter Nádas has a story called Own Death (trans. Janos Salamon), about a man having a heart attack and surviving, and the book is punctuated by photos the author took of a stately pear tree in his garden, through changing seasons. The result is something about transience and endurance, I think—what you have, what you leave, what leaves you. One of the more mysterious meetings between media. The interest is in the silence at the seams.
Artist Amy Meissner: I’m re-reading Glenn Adamson’s Fewer Better Things: The Hidden Wisdom of Objects. You will love it.

Seen any good art lately?
Writer Marsha Pomerantz: In a Boston gallery, photographs by Wei Bi, on which he had calligraphed Chinese text, to me illegible. One work that stood out was a photo of a ceramic pot placed on a stone floor against a stone wall. Lots of rough textures. In the photo a seemingly continuous fissure went through the wall, through the pot, and through the floor. Where was the fissure? In what dimension or what layer of reality or reproduction? Maybe this was a kind of anamorphosis (a word I learned only several months after the gallery visit). And I can’t even begin to guess the relationship of image and text, which had a few words blacked out—maybe a fissure through the text as well.
Artist Amy Meissner: This fall I was introduced to the work of Ragna Róbertsdóttir in Reykjavik, Iceland. Her installations consist of millions of bits of black volcanic stone or shards of clear glass adhered to the wall. I was so moved that I purchased an enormous gallery book and hauled it for two weeks through two more countries.

Anything else? (Here, we invite the collaborators to invent a question, add a comment, or otherwise speak to what the questions so far have not tapped about their Broadsided experience).
Artist Amy Meissner:  You guys, it’s always such a privilege to be a part of these projects.
Writer Marsha Pomerantz: I’ve enjoyed the Broadsided process—anticipating a visual response, my own lack of input (at first frustrating) on the choice of image and the graphic treatment, the surprise of the results, the thoughts provoked by these website questions, and the curiosity, again, about what Amy will have to say. Glad to be part of this. 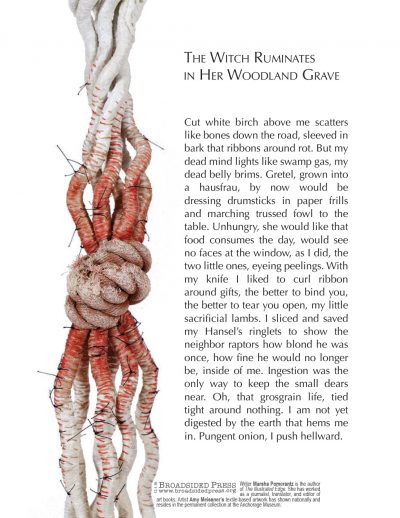 “The Witch Ruminates in Her Woodland Grave” (PDF)

Marsha Pomerantz is the author of The Illustrated Edge (Biblioasis, 2011). Recent poems and essays have appeared in PN Review, Raritan, Salamander, and Best American Essays 2016. Her poems often evoke real or imagined visual art, and she edited for many years at the Harvard Art Museums. From 1970 to 1990 she lived in Israel, where she began translating fiction and poetry from Hebrew. Her writing has been abetted by the MacDowell Colony and the Massachusetts Cultural Council.

Artist Amy Meissner is an artist, writer and mother living in Anchorage, Alaska. Her textile-based artwork has shown nationally, with award-winning work residing in the permanent collection at the Anchorage Museum as well as in several private collections. She blogs about the collision of family, personal history and art at www.amymeissner.com.