What made you think of Broadsided for this poem?
Poet Luiza Flynn-Goodlett: It’s a poem that grapples with the current ecological moment, so I thought it would be exciting to literalize that—to see it out in the sunshine, amid the splendor and squalor of our dying world.

What inspires you in this poem? What drew you to it?
Artist Douglas Culhane: Rats!—snarky ones! I love the way that the poet took a metaphorical phrase and turned it into something real (poetry is good at this). It also illuminates the questions of how other species are reacting to the human destruction of the planet and the enormity of what is occurring. It also invites speculation about how humans and rats have co-evolved over the centuries. My visual reference to paleolithic cave art was a nod to our history together, real and imagined.

Describe your dream “Vectorization”—where, in your wildest dreams, would you most like to see this broadside posted in the world?
Artist Douglas Culhane: The Salton Sea, the White House.
Poet Luiza Flynn-Goodlett: Blanketing the White House lawn or falling like leaves from the ceiling of the Senate chambers.

What did you think an artist would pick up on from your poem? Did the visual artist refract any element of the poem that made you see the poem differently?
Poet Luiza Flynn-Goodlett: It was interesting how Douglas zeroed in on the rats. The parent almost falling and then kissing the child on the head is what comes to mind when I think of the poem. But really, that parent is a rat, we’re all rats, so maybe that image—rather than a rare moment of grace—is the most important part of the poem.

Have you ever created artwork inspired by literature outside of Broadsided Press? What was that experience like for you? Why were you inspired to do so?
Artist Douglas Culhane: Yes, I often make hybrid works (word-drawings / visual poems) using my own text, and I have collaborated with poets over the years. I have also made objects described in prose, including the oyster-shell mirror in “David Copperfield” and Kafka’s invention “Odradek” (from “Cares of a Family Man”).

Have you ever written work that has been inspired by visual art? What was that experience like for you? Why were you inspired to do so?
Poet Luiza Flynn-Goodlett: Hmmm… I haven’t really done much ekphrastic work. I’m really not particularly multi-talented, so I tend to approach art with pure awe and a sense of sublimity. I almost can’t imagine engaging with it through words—the fact that it’s beyond language is so central to what I admire about it.

If this broadside were a type of weather, what would it be?
Poet Luiza Flynn-Goodlett: A cold, wet November day, the wind whipping up dead leaves and trash.
Artist Douglas Culhane: A perfect storm—the apocalyptic kind. One with some moments of clearing for hope it will be over soon, but it won’t.

Read any good books lately?
Artist Douglas Culhane: How to Tame a Fox (and Build a Dog), an account of the Russian fox-farm experiment and a discussion of evolution and domestication.  The Condition of Secrecy, essays by Inger Christensen. Volume 6 (mercifully the last) of  Knausgaard’s My Struggle. Anything by Brenda Shaughnessy (poet).
Poet Luiza Flynn-Goodlett: Oh gosh, so many! Gods of Tango by Carolina de Robertis was the book of the summer for me. I’d never seen someone write about queerness and gender in a way that felt so close to my experiences, even though it’s set so long ago! Also, There There was gutting and intricately, ambitiously crafted. As for poetry, I’ve been spending time with Xandria Phillips’s Hull, Oliver Baez Bendorf’s Advantages of Being Evergreen, and Alison Rollins’s Library of Small Catastrophes. There’s so much incredible writing right now—it’s a constant delight!

Seen any good art lately?
Poet Luiza Flynn-Goodlett: I loved “Queer California: Untold Stories” at the Oakland Museum of California. It was incredible to not just see what art queer people have made during our movements for liberation, but also to see the many creative ways we’ve communicated our art and ideas. That was so inspiring to me as a writer and as an editor.
Artist Douglas Culhane: The Hilma af Klint show has really stayed with me.

Anything else? (Here, we invite the collaborators to invent a question, add a comment, or otherwise speak to what the questions so far have not tapped about their Broadsided experience).
Artist Douglas Culhane: When working with text I usually try and avoid being literal (illustrative).  Here I could not help but go with the rats. I liked considering their appearance—cute ears, horsey heads, creepy bare tails, and delicate paws. I’m not nearly done with the rats in my work, or they’re not nearly done with me.
Poet Luiza Flynn-Goodlett: This was such a gift to be a part of! I love how this project dares us to imagine new ways of poetry being in the world, and of art of and poetry communicating. I also love that it’s free and interactive—it’s all really quite radical! 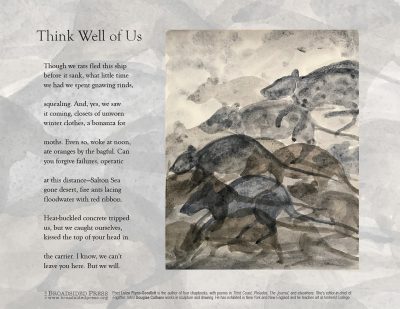 Poet Luiza Flynn-Goodlett is the author of four chapbooks, most recently Twice Shy, forthcoming from Nomadic Press. In 2019, she was a finalist for the National Poetry Series and the New Issues Poetry Prize. Her poetry can be found in Third Coast, Pleiades, The Journal, The Common, and elsewhere. She serves as editor-in-chief of the LGBTQ+ literary journal Foglifter and lives in sunny Oakland, California.