What did you think an artist would pick up on from your poem?
Poet Gabby Bates: There are so many surreal images in the poem, I had no idea which one the artist would be most inspired by. Personally, it’s the “blizzard of paper birds” that’s most visually striking to me, but I can see how using that as the artistic springboard would have been too obvious. What makes Kevin such a great artist is that his work doesn’t simply represent the poem; it revolutionizes it.

What inspires you in this poem?
Artist Kevin Morrow: The notion of beauty, fun, joy versus duty.

What was your hope, as a designer, to bring to this collaboration?
Designer Sarah Van Sanden: I wanted to give a sense of the text and the image interacting, playing up what I perceive as an interesting dissonance, even tension between the two.

Did the visual artist refract any element of the poem that made you see the poem differently?
Poet Gabby Bates: I think the sculpture emphasizes the human speaker and audience of the poem in a way I’d never considered before. When I wrote the poem, I was exploring a world of illogical and impossible experiences, a world where my physical body could not go. To look at a human face, the solid and undeniable evidence of our physical boundaries, while reading this poem illuminates the yearning for freedom that drives my art. There is so much emotion in the mouth alone! You can almost taste how badly that sculpture wants to drop its peach-skinned kiss.

When you began this piece, was it color, shape, or some other aspect that you followed? Did that change?
Artist Kevin Morrow: I just wanted to represent the face of the person whom this ‘speech’ was directed to. Bound by worry and not focusing on other things; more pleasing things, much like I was in a phase of when this poem came to my attention.

What surprised you about this collaborative piece?
Poet Gabby Bates: I was surprised and delighted by the gray scale bust image. My work hinges on contrast and juxtaposition, so I love the pairing of surreal non-sequiturs with such a classical strand of art. The wildness of the poem’s plea contrasted with the bust’s stillness creates an entirely new tension. And the 3-D element speaks to the type of multi-sensory experience I was attempting to convey with the poem.
Artist Kevin Morrow: I was not expecting the placement and the form of the words to be what they were. Interesting move.

Have you ever written work that has been inspired by visual art? What was that experience like for you? Why were you inspired to do so?
Poet Gabby Bates: Yes! In fact, I consider Salvador Dalí to be one of my main poetic influences. Ekphrastic poetry comes a lot more naturally to me than, say, trying to write in a particular form. I’m not ashamed to sit down on a museum floor to write when a piece speaks to me. I’ve also written a lot of poems inspired by photographs. My mother is an internationally renowned photographer, and I’ve been fortunate enough to collaborate with her on a few projects. The one I’m probably most excited about involves Birmingham’s annual Dia de los Muertos (Day of the Dead) celebration.

Describe the collaboration in one word.
Poet Gabby Bates: Blouse-drenching
Artist Kevin Morrow: I cannot think of one word, so rather I would describe it as an immediate response. I knew right away what to make, how to make it.
Designer Sarah Van Sanden: Knitting

If the Broadsided collaboration were a piece of music, what would it be?.
Poet Gabby Bates: “Sounds Like Hallelujah” by the Head and the Heart… And not just because that’s what I’m listening to right now as I write this.
Artist Kevin Morrow: Solo Violin. Slow, walking, campfire violin.
Designer Sarah Van Sanden: Human League’s “Don’t You Want Me?” because it’s telling two different versions of a story.

Read any good books lately?
Poet Gabby Bates: YES. I graduated from Auburn University in December, and I won’t start my MFA until August, so I’ve been doing a lot of reading for myself lately. I finally got my hands on Dean Young’s Fall Higher and George Saunders’ Tenth of December, both of which are fantastic, obviously. I’ve also been reading as many Printz Award winners as possible, in the hopes that their greatness will rub off on the YA novel I’m working on.
Artist Kevin Morrow: Americanah by Chimamanda Ngozi Adichie, Canoeing with the Cree by Eric Severeid, The Man Who Walked Through Time by Colin Fletcher.
Designer Sarah Van Sanden: I finally got my hands on Alison Bechdel’s Fun Homeand it was devastatingly funny/sad.

Seen any good art lately?
Poet Gabby Bates: I spent the afternoon walking around Orr Park in Montevallo, Alabama, last weekend, where a man named Tim Tingle has carved the dead parts of cedars into whimsical faces and animals. He uses a chisel and hammer, and the degree of detail is stunning. On an overcast day, it’s simply magical. If you’re ever in the area, you need to check it out.
Artist Kevin Morrow: Thankfully I live in New York City and have the Met, and frequent that often. All of our creative existence is in there.
Designer Sarah Van Sanden: I don’t know if it’s art, but I’ve been obsessed with logos lately. In my 20’s I thought graphic design was using creativity for corporate evil, now I can’t stop marveling at the ways people communicate visually with efficiency and beauty.

Anything else?
Poet Gabby Bates: One of my favorite things about Broadsided is the idea that people all over the world will be surprised by the same poem and the same art. I have family members traveling to Venice soon, and they’re going to put some Broadsides up there. Italian passersby reading my poem? That’s just the coolest thing. 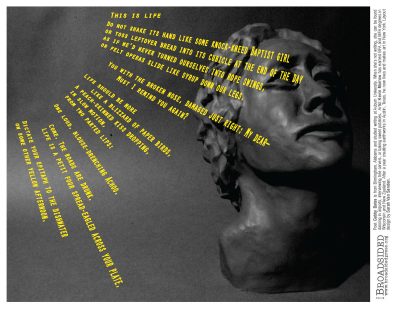 Born and raised in Birmingham, Alabama, Poet Gabby Bates currently studies creative writing at Auburn University, where she is an undergraduate research fellow and managing editor for The Circle literary magazine. She hopes to complete her first book in the next year and then pursue a creative nonfiction MFA in the delightfully drizzly Pacific Northwest. Gabby’s obsessions include the Civil Rights Movement, Poland, tic disorders, and words without English equivalents.

Artist Kevin Morrow is a native of Wisconsin who received his BFA in sculpture from the University of Wisconsin-Milwaukee in 2003. Soon thereafter, he received his MFA degree from the University of Auckland, New Zealand where he studied in the Contemporary Maori Department (Te Toi Hou). Upon completion, Morrow returned to the U.S. to live and work in Austin, Texas where he spent a year or so concentrating on earthworks. Morrow now lives and works in New York.

Designer Sarah Van Sanden lives in Seattle, where she takes every opportunity to relish in urban nature. She has studied visual art, botany and design and makes her living designing and building landscapes. In her spare time she works on various creative projects with plants and plant materials.