What inspires you in this poem? What drew you to it?
Artist David Bernardy: I enjoy how this poem offers a kind of secret history of the thistle plant.  It feels like a poetic etymology.  And it seems to be finding the beautiful in the everyday, in the overlooked. I like that this secret history is coupled with the strength, resilience, and tenderness one must find at a place like Thistle Farms.

Did the visual artist refract any element of the poem that made you see the poem differently?
Poet Jennifer Jean: The “third grade girl/ tying her shoes” in the poem was inspired by my daughter—in fact I had her in mind throughout the writing process. However, I didn’t know this mother/daughter aspect was strong enough for David, or any reader, to notice. It seems he did, though—as proved by the lovely photo-triptych of what appears to be a mother and daughter.

When you began this piece, was it color, shape, or some other aspect that you followed? Did that change?
Artist David Bernardy: When I first read the poem (I think it was about the time I got to the line about the shoe lace) I began to think of this as a kind of story about female strength. I don’t know If I can explain this well, but something about that line and the dedication together opened the poem up for me.  So I knew I wanted to deal, visually, with a kind of strong woman, or the image of women supporting each other.  I’ve been really obsessed with vintage photo booth pictures lately, and it seemed like a good chance to incorporate one of those images into this piece. Then, once I saw how great thistles really were, I knew I had to include an image of that, too.

What surprised or struck you once you saw the finished broadside?
Poet Jennifer Jean: I was surprised that David was able to visually reflect my archaic references and verbal tics—by including the older seeming photo-triptych, two evidently older map segments, and what seems to be a weathered drawing of a thistle (possibly from a weathered herbarium?).
Artist David Bernardy: I guess what struck me was seeing the images right next to the words, and hoping that they did justice to the power of the poem.

Have you ever written work that has been inspired by visual art? What was that experience like for you? Why were you inspired to do so?
Poet Jennifer Jean: The Philadelphia Museum of Art once housed an unfinished portrait by Gustav Klimt, called Frauenbildnis (Ria Munk III), and it so captured my attention that I wrote several (unfinished!) poems about the piece. Most of the poems centered around either the nature of works-in-progress (an obsession), or on the Nazi collaborators associated with the painting’s history (an obsession), or on how much Ria Munk’s mother loved her (an obsession!).

How does literature fit into your creative life as a visual artist?
Artist David Bernardy: I consider most of my work narrative, whether that is immediately clear to a viewer or or not. I am always reading, writing when I can, always telling stories, either through words or images.

Describe the collaboration in one word.
Poet Jennifer Jean: Woven

If this broadside were a piece of music, what would it be?
Poet Jennifer Jean: “God Bless the Child,” as sung by Billie Holiday.

Read any good books lately?
Poet Jennifer Jean: Recently, my husband and I had a great laugh reading Odes, by Sharon Olds, aloud to each other. Sharon Olds has a great sense of humor! Also, I’m in the middle of Redshirts by John Scalzi—it’s a fun sci-fi beach read. And, it’s a great break from some other great but weighty prose I was tackling for a while—Elizabeth Bishop: A Miracle for Breakfast, by Megan Marshall.
Artist David Bernardy: I’ve been working on a children’s picture book, so I have been pouring over many of those, both as an author/illustrator and as a dad.  One of my favorites lately is called Herman and Rosie by Gus Gordon.  I’ve also been re-reading Jennifer Willoughby’s poems, Beautiful Zero.

Seen any good art lately?
Poet Jennifer Jean: This summer, I went to the Isabella Stewart Gardner Museum for the first time and it was WOW! Too many amazing works to name were jam-and-peanut-butter-packed into one oddball palace in mid-town Boston. I will say one of my favorites there was El Jaleo by John Singer Sargent.
Artist David Bernardy: I’ve been searching out a lot of collage work for inspiration, and I came across the lovely painterly collage pieces by Michael Cutlip.  I’ve only ever seen them online, but they really appeal to me.

Anything else? (feel free to invent a question, add a comment, or otherwise speak to what these questions have not tapped for you).
Poet Jennifer Jean: This poem is part of a series which explores objectification and sex-trafficking in America—it’s one of the poems that seeks to invoke hope and celebration in the midst of these prevalent tragedies. It is dedicated to the women of Thistle Farms (www.thistlefarms.org), whose mission is to heal, empower and employ women survivors of trafficking, prostitution, and addiction. I’m really glad that it has found a home at Broadsided, and am deeply grateful to David Bernardy for choosing to include it in his artwork.
Artist David Bernardy: I just want to say thanks to Broadsided for its overall project and to Jennifer for bringing such a fine poem into the world. 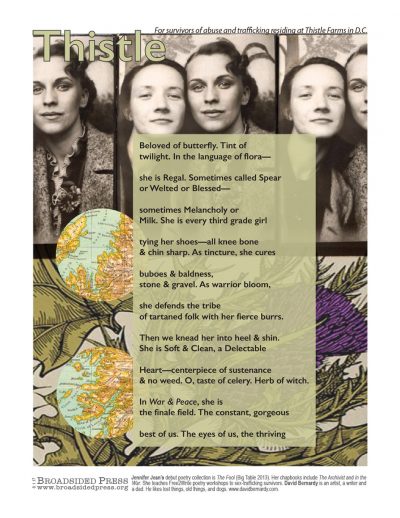