What made you think of Broadsided for this poem?
Poet Derek Sheffield: This is the first poem in my forthcoming book, Not for Luck, and I wanted it to appear somewhere special. I was fortunate enough to have a poem in Broadsided in 2015 through the ASLE conference. The artist, Christine Alexandre-Zeoli, made such a striking image to accompany the poem, and I wanted a chance for that same collaborative magic to happen again. I can’t ignore the title of that poem, “Firefighters Walk Into Mountain Sports,” nor Alexandre-Zeoli’s flamescape as I sit here in September of 2020 and breathe the ash of this burning West that has taken the sky, the sun, the stars.

What inspires you in this poem? What drew you to it?
Artist Douglas Culhane: I was first taken by the music of the poem. The rhymes, the consonants crashing into one another, and the way this related to the images that begin piling up. There also is a progression in dynamics—images thin, the volume decreases—a sort of gorgeous diminuendo. All of this in just a dozen lines.

Initially I wanted to use some of the images from the poem in my response, but it really didn’t work. They were complete in the words. Instead I created a chromatic gradient, light and color shifting in descent, to support and complement the movement and mood of the poem.

Describe your dream “Vectorization”—where, in your wildest dreams, would you most like to see this broadside posted in the world?
Artist Douglas Culhane: Somewhere within eyeshot of “every street’s hatch of after-school slammers.”
Poet Derek Sheffield: I’d love to see it appear where the balm of quiet contemplation is needed. Right now, that feels like everywhere, including this room where I type.

What did you think an artist would pick up on from your poem? Did the visual artist refract any element of the poem that made you see the poem differently?
Poet Derek Sheffield: I was hoping the artist would especially feel how the musicality and tone work together. I don’t see a refraction so much as I see, amazingly, a kind of transliteration. I don’t want to identify all the ways I see the poem in the painting because I want others to experience that for themselves, but suffice it to say this painting looks and feels to me just as the poem sounds and feels.

Did anything shift for you or come into new light once you saw the poem and art together on the page?
Artist Douglas Culhane: “Oh, lines of text are horizontal stripes!” Also the spatial clarity of the poem and how much happens in those three-times-four lines.

Have you ever written work that has been inspired by visual art? What was that experience like for you? Why were you inspired to do so?
Poet Derek Sheffield:  Yes. I think the first time occurred when I was wandering around the Chicago Art Institute and turned a corner to quickly fall under the spell of Jules Breton’s Song of the Lark. I stood for a long time in the company of its earthy wonder. A few months later the poem was finished. I’ve also collaborated with Scott Bailey, a painter whose abstract landscapes often evoke in me a sense of the sublime. Most recently, I gave my students an ekphrastic writing assignment at my college’s art gallery. I was writing along with them to model the process and ended up with a poem in response to a woven basket by Joe Feddersen.

If this broadside were a type of weather, what would it be?
Poet Derek Sheffield: A foggy dusk just before an all-night drizzle begins.
Artist Douglas Culhane: Falling barometer and temperature with rising humidity, in crepuscule.

Seen any good art lately?
Poet Derek Sheffield: Thanks to COVID, just through the screen. Scott Bailey sent me images of a new series he’s working on. Also, I’ve been viewing some marvelous work of artists who live in Cascadia. Most recently, Ray Troll.
Artist Douglas Culhane: Hilma af Klint’s notebooks at Lightforms Gallery, Hudson NY. Charles Yuen at Pamela Salisbury Gallery. (I have been staying close to home). Markus Guschelbauer (Austrian photographer and installation artist) currently has some exhibitions on view and a book of his work was just published.

Anything else? (Here, we invite the collaborators to invent a question, add a comment, or otherwise speak to what the questions so far have not tapped about their Broadsided experience).
Artist Douglas Culhane: This process of collaborating remotely has taken on a new aspect. It feels more intense, which is strange since so much more of our lives now involves the remote. I think it must be that there is that next step—Vectorization—that takes the remote into the actual world (such as it is).
Poet Derek Sheffield: Gratitude. To Douglas Culhane for attending so clearly to the poem and honoring it with such subtle beauty. To Broadsided Press. Thank you for giving us this collaboration space, which is such a special gift and so needed right now.

And this context for the Vectorizing. On my way home from multiple errands, I parked my truck in the lot of our local library and started walking towards the bookstore. On my way, I passed by a group of people who were gathered alongside Highway 2 and waving a big blue-and-white flag and several Trump signs. They were waving and dancing and “woo-hooing” at the occasional honk they received from the traffic.

With the help of two young friends who were on shift at our local bookstore, A Book for All Seasons, Bella, one of the most voracious readers I’ve encountered, and Shay, a talented young poet trying to figure out what to do with all her marvelous poems as she begins her studies at the Evergreen State College, I Vectorized, then made my way back past the sign-wavers to my truck and home. I turned on NPR as I unloaded the twelve sticks of 10’ PVC I’d bought at Lowe’s and heard the commentator say something I thought at first was a hypothetical. I kept working and listening and then stopped. No. It wasn’t hypothetical. I grabbed the nearest thing, which turned out to be the red metal handles of my rototiller, and bowed my head and listened to the news that Ruth Bader Ginsberg was dead. 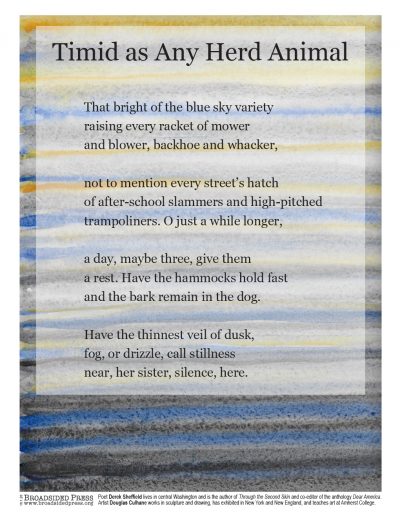 “Timid as Any Herd Animal” (PDF)

Poet Derek Sheffield’s collection Not for Luck, which will be published by MSU Press in 2021, was selected by Mark Doty for the Wheelbarrow Books Poetry Prize. With Simmons Buntin and Elizabeth Dodd, he coedited Dear America: Letters of Hope, Habitat, Defiance, and Democracy (Trinity, 2020). His honors include the James Hearst Poetry Prize judged by Li-Young Lee and fellowships from the Sustainable Arts Foundation and Allied Arts. He lives on the eastern slopes of the Cascades in Washington and is the poetry editor of Terrain.org. www.dereksheffield.com