What did you think an artist would pick up on from your poem?
Poet Willie Lin: I thought the bees/hives would probably appear. I think I’d also hoped that the atmosphere of the poem—its confusion, distraction, and illogic—would be evoked somehow.

What inspires you in this poem?
Artist Janice Redman: That muffled quality in the dream that’s so terrifying—which I think is also in my own work. In my own personal work, I often wrap domestic objects. I muffle them. They lose their voice. I silence them. This silencing of domestic objects is about silencing childhood feelings… I think that’s what drew me to the poem.

Also, I keep bees, and I have a very intimate connection to them and to the workings of the beehive. I go into the hive because I have a love of beekeeping and bees, but it’s dangerous for me. I’m highly allergic to bees. So the balance of fear and comfort that I experience when I’m beekeeping are, for me, something I sense deep in the poem.

Last summer, when I was working the hives, I was smoking one. I was very focused on opening it, and while I was doing that, a spark came out and the hillside caught fire. I didn’t even notice at first. It was terrifying. Our house could have burned. The whole hill was scorched. There’s something in this poem that connects me to that—those deeply complicated feelings. Issues of safety and caretaking and fear.

Did the visual artist refract any element of the poem that made you see the poem differently?
Poet Willie Lin: Yes, I love how deeply personal and impersonal the image appears at once. I often feel uneasy about how frequently the pronoun “I” appears in my work—it seems inescapable and nauseating somehow. I was happy to see the way the image almost erases or dissolves the “I.” It’s abstract. There is nothing there to evoke a person yet it feels personal and interior and singular.

When you began this piece, was it color, shape, or some other aspect that you followed? Did that change?
Artist Janice Redman: I had an old book called Starting Right With Bees, published in 1974 and I just started taking images from it. I also started reworking some monoprints I’d had for a while that hadn’t been resolved. I would move from one thing to another, not knowing what I was looking for. I collaged old black and white images into the prints and using stencils.

At the end, I had about six prints, all in different stages but all related and responding to the poem. I asked a friend to choose one. But I felt like I could have continued on doing more pieces. Responding to the poem opened up a gate that more images came from. I didn’t know how I’d complete a piece… I just kept following them. It became a visual dialogue with the poem and between the pieces.

This process put me in touch with something that was already in my work that, since, I’ve been able to draw on. I’m not sure I can articulate just what it is, but at first I was worried that the response would be a distraction from my “own work.” It occupied a big part of my mind this past winter, and I approached the visual response repeatedly, in different media. Now, looking back, it has furthered things in my own work that I didn’t really realize were there.

What surprised you about this collaborative piece?
Poet Willie Lin: I was surprised by how the layering and details in Janice’s work created a sense of space and invited questions. I love the fragmentation and doubleness of the elements. How the hive also looks like a sort of netting trapping what’s behind it or maybe keeping the viewer from approaching. How I’m not quite sure whether things are moving closer or receding.
Artist Janice Redman: It was better than I thought it would be. I think of graphic designers as fiddling around a lot, but I like the way the piece was… the piece. The image was the image and the poem was the poem. And then I really love the ghost image of the print behind the poem. Because that was what I was doing as I made the piece itself—ghost images, cutouts, layering.

Have you ever written work that has been inspired by visual art? What was that experience like for you? Why were you inspired to do so?
Poet Willie Lin: Often, mostly recently by Yves Klein’s fire paintings. First, they appealed to me in a visceral way. I was then also intrigued by the process of their making.

If the Broadsided collaboration were a piece of music, what would it be?
Poet Willie Lin: Björk’s “Crystalline”

Seen any good art lately?
Poet Willie Lin: I enjoyed seeing the Isa Genzken retrospective at the Museum of Contemporary Art in Chicago. It was my first time encountering her work and I found the pieces from the 80s and 90s to be especially persuasive and enthralling.

Read any good books lately?
Poet Willie Lin: Derek Walcott’s Sea Grapes and Lydia Davis’ Can’t and Won’t.
Artist Janice Redman: I can’t read right now… it’s summer. But Starting Right With Bees is a pretty good book. I actually have a pile of copies, now. I’m buying as many old copies as I can find.

Anything else?
Poet Willie Lin: Thank you! To Janice and to Broadsided.
Artist Janice Redman: I just want another poem to respond to. I want to do another collaboration. The whole experience became this mindflow, this excavation of feelings and images and I had no idea what would come out of it at the other end. I had not a clue. It was really exciting and terrifying. I wanted it to have hope or light within it, though. For the image itself to have poetry, whatever that means. To have a transformative quality in the work. 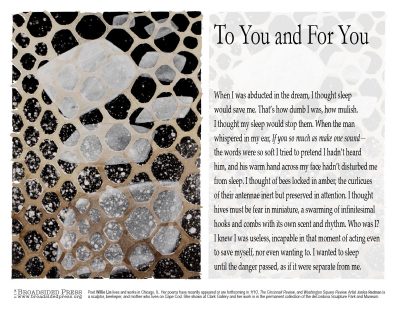 Poet Willie Lin lives and works in Chicago, IL. Her poems have recently appeared or are forthcoming in 111O, The Cincinnati Review, and Washington Square Review.

Artist Janice Redman is a sculptor, beekeeper, and mother who lives on Cape Cod. A former fellow of the Fine Arts Work Center in Provincetown, she shows at Clark Gallery in Lincoln, Massachusetts and her work is in the permanent collection of the deCordova Sculpture Park and Museum.