What did you think an artist would pick up on from your poem?
Poet Francesco Levato: I didn’t have any preconceived ideas about how the artist might interpret my work.

What inspires you in this poem?
Designer Elizabeth Bradfield: The overlapping voices and aesthetics of its various sections. Also, related to that, the poem’s fragmentation as a way of representing the chaos of war. I admire how it manages to engage with the realm of the political without being didactic.

Did the visual artist refract any element of the poem that made you see the poem differently?
Poet Francesco Levato: Yes. The poem itself is written in a series of linked fragments that build on each other, producing progressive layers of meaning. The artist took some fragments out of their original position and context and arranged them in such as way as to convey the essence of the longer poem while embodying both the physical fragmentation of living in a conflict zone and the actual war rug the poem was inspired by.

What surprised you about this collaborative piece?
Poet Francesco Levato: See above answer.

What surprised you about this piece, once you saw the artwork and poem together?
Designer Elizabeth Bradfield: I had an idea that the poem could use text as its own art, but I wasn’t sure how it would all come together. It feels complete to me, not excerpted.

Have you ever written work that has been inspired by visual art? What was that experience like for you? Why were you inspired to do so?
Poet Francesco Levato: My poetry is heavily influenced by visual work (film, photography, paintings, and installations), though it typically isn’t ekphrastic. What inspires me in these works works depends on the work itself, for example “War Rug” was inspired by an actual war rug I have from Afghanistan that was produced during the Russian occupation. The multiple narratives in the film “Babel” got me thinking about weaving multiple voices together in an exploration of embodying the construction of the rug. And the visual layering, complexity, and symbolism in the installation work of the Swiss artist Christoph Büchel is a constant source of inspiration for me.

If you had to represent the Broadsided of “War Rug” with one word, what would it be?
Poet Francesco Levato: Surprising
Designer Elizabeth Bradfield: Tough

Anything else?
Designer Elizabeth Bradfield: Yes. I do graphic and web deisgn, but I’m not an artist, so it’s with great humility that I approached this project. The artists of Broadsided amaze me with their skill, creativity, and energy. Because “War Rug” was sent to Broadsided as a long, exerptable poem, it felt different than our other submissions. Mark and I had several long discussions about how we might bring the poem to artists. By the end of our talks, the idea of the Broadsided had started to surface, and I proposed trying my hand at design. I’m grateful for the chance. 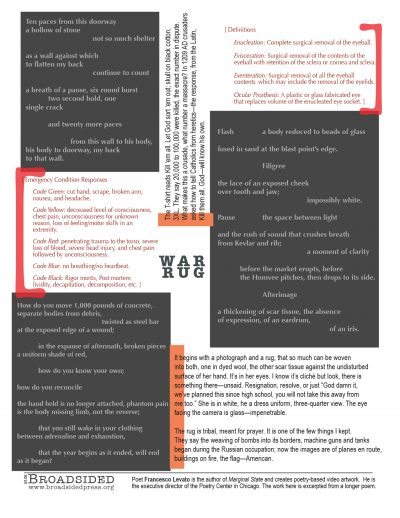 Poet, translator, and new media artist Francesco Levato is the executive director of The Poetry Center of Chicago. He is the author of Marginal State, a collection of poetry, and his work has been published internationally in journals and anthologies, both in print and online, including The Progressive, XCP: Cross Cultural Poetics, Versal, and many others. His poetry-based video artwork has been exhibited in galleries and featured at film festivals in Berlin, Chicago, New York, and elsewhere.

Designer Elizabeth Bradfield is a poet and web designer.