What is behind your choice of this piece of art in response to the topic “Guns in American Culture”?
Artist Osceola Refetoff: This portrait addresses assumptions behind the one-dimensional caricature of the “gun nut,” which can generate an unhelpful sense of otherness and suspicion. Finding solutions to gun violence in the United States will require dialog between persons with opposing viewpoints recognizing each other as individuals rather than simply yelling at one another from across the ideological divide.

Why did this piece of art resonate for you or seem like it would give you an avenue into writing about this subject?
Poet Gregory Stapp: What first struck me about this piece was the dichotomies it expressed. The people pictured there, you fall in love with them right away because they look so content and kind. There’s a sense that the weather is warm and comfortable. But the people are casually holding two powerful weapons. There are antlers that appear to come out of the man’s head like a jackalope. The separation between humanity and the natural world is accentuated by the edge of the house in the background. For me this piece expresses what needs to be expressed about “Guns in American Culture” because it presents a positive image of gun ownership while suggesting a darker, unspoken image of gun ownership. I had been looking for an entry point into writing about guns in American culture and as soon as I saw this piece, I knew that was the way to go. For my poem to register in the same way, it needed to document the subjects of the piece as a response to them. It needed to cast a positive pallor over the scene and subtly suggest the darker side.

What surprises you in the poet’s response to your artwork?
Artist Osceola Refetoff: As an artist, you put images into the world without any certainty of how they will be received or understood. The presence of hunting rifles transforms our reaction to this “otherwise” radiant couple – still together after 62 years – holding hands behind their sunlit home on edge of the Sierra Nevada wilderness. Poet Gregory Stapp grasped the precise meaning I hoped to communicate, and that is very gratifying.

What do you think is the role of art in regards to real-world, real-time events? In other words, what makes a “successful” occasional or political piece of writing or art?
Artist Osceola Refetoff: I believe artists tend to overestimate the potential impact of their political art – work that is often exhibited within an echo chamber of similar viewpoints. Effectuating change requires influencing opinions on the other side of a political debate. With a subject as polarizing as guns in the United States, opinions are difficult to change as they are tightly bound to our sense of personal identity. For me, the best political artwork encourages thoughtfulness and engenders further discussion.
Poet Gregory Stapp: To me, art is always about response. A “successful” political piece sees a nail and, rather than hitting the nail on the head, describes or documents the nail, the hammer, the wood in some way. It leaves a space open for continued response rather than trying to direct a specific response.

If the Broadsided collaboration were a piece of music, what would it be?
Artist Osceola Refetoff: The Gene Autry version of Cole Porter’s classic “Don’t Fence Me In.”
Poet Gregory Stapp: There’s a guardrail along the loading dock of the building where I work, that, because of the way it was manufactured with holes in each hollow post and how it is situated facing an open field where the wind can come whipping in (and often does), translates the wind into an ethereal music to accompany the rhythmic chugging of the large trucks pulling in. That’s what this collaboration would be, if it were music—a windy duet in the Earth’s infinite symphony.

Read any good books lately?
Artist Osceola Refetoff: I read a lot. Recently, I’ve been captivated by non-fiction that informs me about the world I inhabit. A resident of LA’s Chinatown, I just finished Denise Chong’s The Concubine’s Children, a phenomenal book about the Chinese immigrant experience in Vancouver, Canada. Just back from Mexico, I’m now reading The Maya by Michael D. Coe & Stephan Houston about the history and culture of Mesoamerica.
Poet Gregory Stapp: I just finished Cormac McCarthy’s Blood Meridian, and have now started Toni Morrison’s Beloved and A.R. Ammons’ Sphere.

Seen any good art lately?
Artist Osceola Refetoff: I have so many brilliant artist friends! Los Angeles is overflowing with talent, and part of my practice involves attending 8-12 gallery exhibitions a week. Rather than calling out individual artists like my friend Miles Regis (who exhibited exceptional work last night in Launch LA’s booth at the Los Angeles Art Show), I’d prefer to say that brick and mortar galleries remain crucial to understanding artists and their work. We absorb art from many media, but physical exhibitions are the quintessential way to engage with great artwork, either solo exhibits or thoughtfully curated group shows.
Poet Gregory Stapp: A friend of mine recently visited the Tate Modern in London and posted a photo of a young couple kissing deeply and passionately right there between Dorothea Tanning’s A Mi-voix and Germaine Richier’s Le Fou (L’Echiquier). Although initially piqued by the passionate couple, both the Tanning and the Richier quickly caught my eye and I spent the next several weeks researching and writing about those works.

Anything else? (Here, we invite the collaborators to invent a question, add a comment, or otherwise speak to what the questions so far have not tapped about their Broadsided experience).
Artist Osceola Refetoff: While I encourage artists to express their political opinions, not all of us are well qualified to do that in our work. I look to artists like Shepard Fairey for inspiration regarding the fusion of fine art and political discourse, especially his use of sometimes ambivalent messaging to engage diverse viewers on multiple levels.

UPDATE from Osceola Refetoff on 1/13/18: I just had the opportunity to attend the opening of INTO ACTION: a Celebration of Community Power + Cultural Resistance, installed in a warehouse on the edge of LA’s Chinatown. The event/exhibition featured a great diversity of outstanding political artwork, including several works that powerfully addressed gun violence. Personally, I felt enormously activated as did many of the people I spoke to, and the experience made me reconsider the value of artists engaging people of like political leanings. On a day when the news cycle featured another salvo of vulgar racism from the White House (#shitholes), INTO ACTION was just what I needed to help make sense of these perilous times. The resistance is real and gaining momentum. I highly encourage anyone in Los Angeles to see this show, which runs through January 21. 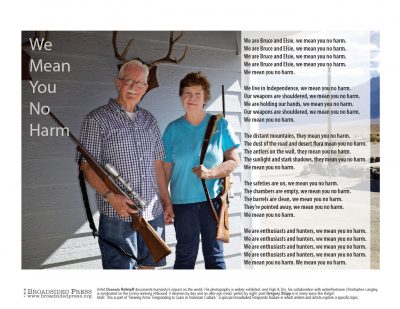 Osceola Refetoff’s interest is in documenting humanity’s impact on the world – both the intersection of nature and industry, and the narratives of people living at those crossroads. His photography is widely exhibited, and High & Dry, his long-term collaboration with writer/historian Christopher Langley, is syndicated on KCET’s Emmy-winning program Artbound.

Gregory Stapp received his BA in Creative Writing from the University of Oklahoma where he earned a Puterbaugh Fellowship in World Literature, and won the Tomas Rivera Student Writing prize in Poetry. He received his MFA from Queens University of Charlotte and his poems have appeared or are pending publication in Lime Hawk Journal, The Ekphrastic Review, Forage, The Cortland Review, Vine Leaves, and The Sierra Nevada Review, among others.