What made you think of Broadsided for this poem?
Poet Jeremy Paden: There were two things: 1) the visual nature of the poem made me think it might offer an artist multiple ways in; 2) the fact that its rhetoric is one of public denunciation—which calls to mind the political use of broadsides throughout history.

What inspires you in this poem? What drew you to it?
Artist Sarah Van Sanden: I was drawn to the stark contrast between gluttony and suffering, the tension over where the poem’s focus lies.

What did you think an artist would pick up on from your poem?
Poet Jeremy Paden: The conflagration, principally…

When you began this piece, was it color, shape, or some other aspect that you followed? Did that change?
Artist Sarah Van Sanden: Because the poem begins with Nero, I did as well. Ultimately, however, I felt the absence of his imagery and foregrounding of the speaker(s) was more powerful.
Poet Jeremy Paden: It was the language and the sound of the language. While there are a handful of Latinate words, the real music of the piece comes from old Anglo-Saxon monosyllables. And that, that attention to language, led to the play with misunderstandings that the poem turns on. That said, the poem started with the image of Nero fiddling, even if it takes a while to get there. But, once it does, it turns it into the extended conceit.

Did the visual artist refract any element of the poem that made you see the poem differently?
Poet Jeremy Paden: Yes. The use of the Roman columns to frame the piece. While Rome is and was the background, and even the sturdy walls of the Colosseum come in to play with the vomitorium, I had not thought of that solid, stability of the columns. And also the use of red principally on the right side gives it an off-balance that I like… though you see some hints flicker against the left column, as if saying, this structure is about to come tumbling.

What surprised or struck you once you saw the finished broadside?
Artist Sarah Van Sanden: It’s important to me to consider the interplay of image and text in a broadside as I create the visual response, so it usually ends up very much as I had intended.
Poet Jeremy Paden: The red globe–whether sun or moon. It’s a lovely touch. It’s both reminiscent of a kind of imperial image—and, not just in its Empire of the Rising Sun/Eastern context; Rome too used the sun, sol invictus, as an imperial image. And, it is also a herald of the end. The blood red moon is an apocalyptic omen.

Have you ever written work that has been inspired by visual art? What was that experience like for you? Why were you inspired to do so?
Poet Jeremy Paden: Yes. I have often worked with ekphrasis—the art of verbally painting, making sculpture, or creating other visual forms. The first long series of poems I ever wrote, which has yet to be published, was on Albrecht Dürer’s self-portraits. More recently, I have a series of poems that take a 16th century Mappa Mundi as their inspiration. Art calls to art; poems to music and also to image and dance. The creative in us is moved by the creation of others and we respond in and through our mode of expression.

How does literature fit into your creative life as a visual artist?
Artist Sarah Van Sanden: Much of my creative life as a landscape designer involves making ordered beauty out of existing challenges, so I spend a lot of my reading time studying to improve knowledge of plants and materials. In contrast, making art for Broadsided gives me a refreshing opportunity to translate concept into visual form with fewer practical constraints and less concern for beauty. I love beauty, but ugly can be pretty interesting, too.

Describe the collaboration in one word.
Poet Jeremy Paden: Quickening (I’m not fully sold on this word).

If this broadside were a piece of music, what would it be?
Poet Jeremy Paden: Beirut meets The Band and Dylan in some Big Pink house for a Basement session.
Artist Sarah Van Sanden: Definitely something with a lot of guitar feedback and and a long, jammy ending.

Read any good books lately?
Poet Jeremy Paden: Federico Díaz-Granados’ Adiós a Lenin, a collection of poems by a Colombian poet. He has an encyclopedic knowledge of Spanish language poetry and American rock-n-roll. Jahira Lumpari’s In Other Words—I read it last year, but it’s still with me. It’s a great memoir on the self as it relates to language and tries to do things with words. It’s in Italian and English. John Berger’s Ways of Seeing—it’s been on my to-read list for a long, long time and I’ve finally cracked it open.

Seen any good art lately?
Poet Jeremy Paden: Marcos Cárdenas: I was recently wandering through the streets of Barcelona and stumbled upon a gallery that had some recent paintings by Cárdenas—he’s a photorealist and not only does he have a great eye for perspective, he plays with layering. His street scenes are often of store fronts and café windows. Bystanders are beside doors that open up to interiors or reflected in windows that show a life taking place inside. Loyiso Mkize: I also recently came across the art of Loyiso Mkize. His “Reflections of Inner Truth” are a wonderful blend of gorgeously detailed faces that open up, explode into visions of complex dreams and desires. Alexandra Domínguez: Along with gorgeous surrealist oils, Domínguez is a print-maker who then paints over her prints, turning print series into one-offs and creating visual palimpsests.
Artist Sarah Van Sanden: I just saw a show surveying Kerry James Marshall’s work and was blown away by the the way he brings together highly conceptual work and gorgeously tactile images that range from tragic to hilarious and sometimes both at once. His constant play between heaviness and lightness, space and flatness, seriousness and whimsy, keeps me looking and looking and looking. 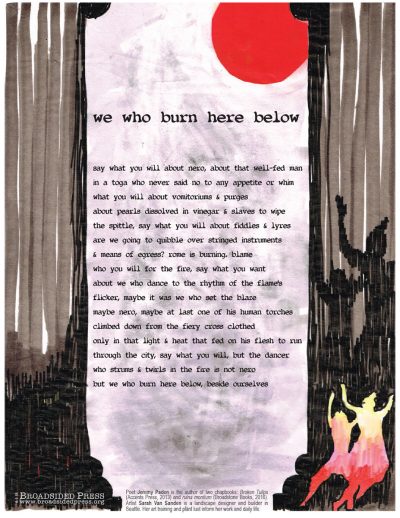 Artist Sarah Van Sanden lives in Seattle, where she takes every opportunity to relish in urban nature. She has studied visual art, ethnobotany, and landscape architecture and makes her living designing and building landscapes. In her spare time, she works on various creative projects with plants and plant materials.