What did you think an artist would pick up on from your poem?
Poet Gretchen E. Henderson: I tried not to form expectations, so my mind wouldn’t wrap and warp around a certain scope of representation. I assumed that cartographic and nautical elements would play some role, given the poem’s slant of historical mapping, but Elizabeth’s rendering took my breath away.

What inspires you in this poem?
Artist Elizabeth Terhune: Many things. As a visual artist, the outrageous number of image possibilities (maps, compasses, vermilion roses, gales, webbing, tattoos, coastlines, etc.) immediately appealed to me. I also identified with the author’s attraction to the world of old books, navigational instruments, odd colors, and vocabulary.

Did the visual artist refract any element of the poem that made you see the poem differently?
Poet Gretchen E. Henderson: Her palpable capture of the corporeal caused me pause—in the best sense. She rendered the map as a living, breathing creature—defying its inanimate state (as a navigational guide through fixed routes, as a legible two-dimensional surface) moved and moving, able to be haunted and to haunt.

What surprised you about this collaborative piece?
Poet Gretchen E. Henderson: I was surprised by the clawed hands, groping from the bloodred heart (which might be a brain, or both morphed together). Defying figuration, the creature seems to be clawing itself into existence. In my other writings, hands are a common motif as both means and ends: enabling our species to invent, use, and manipulate tools that, in turn, inform our cognitive, creative, even physical development. Although I don’t see hands as central to “Wreckage,” they strangely and marvelously appear in Elizabeth’s rendering. Saturated—at turns watery, even scaly—the quality of the creature evokes an evolutionary sensibility, too.
Artist Elizabeth Terhune: I was astonished that it worked as well as it did. I’d been worried that my art did not have enough of the delicate, antique qualities that would characterize an old book. My monster seemed perhaps too modern. I drew the wheel/compass/instrument/planet/gears to try and get closer to what I thought was the world of the poem. It took Liz Bradfield’s sensitive and skilled hand to bring the two images together so beautifully. I send her an enormous thank you.

Have you ever written work that has been inspired by visual art? What was that experience like for you? Why were you inspired to do so?
Poet Gretchen E. Henderson: My relationship with the visual arts is linked to my background in music, nurtured by a smattering of arts courses, residencies at artists’ colonies, and much museuming. Like music, the plastic arts encourage formal elasticity more than some stricter literary categorizations, inviting hybridity, cross-fertilization, mutation, metamorphosis. My current “novel” (comprised of fictions, poems, images, scholarship, other elements) is structured as an art catalogue, and my prior “novel” manuscript was a kind of ekphrasis in prose. This poetry series, “Wreckage,” grew out of many interactions with historical maps: their wildly different representations of overlapping geographic spaces, with manipulated dimensions to help locate a reader/traveler. Coming at writing via a backdoor, most of my work has been informed in some way by the arts, ranging across traditional mediums, taking recent cues from installation and performance art.

When you begin a piece of visual work (or, if that’s too broad, when you began this piece), is it color, shape, or some other aspect that you follow?
Artist Elizabeth Terhune: Burnt beasts. Copper scales. It was the chance to create a sea monster, which I’d never done before. I have a wonderful book about the history of the art of natural history. In it I found medieval woodcuts and copper engravings of sea creatures, real and imagined, and a lot of 16th-, 17th- and 18th-century illustrations. I also looked at Kwakiutl sea monster masks from the turn of the century, monsters from Grünewald’s Isenheim altarpiece, illuminations from the Book of Kells, a photograph of the giant South American glyptodonts, Panochthus frenzelianus, Uccello’s “St. George and the Dragon”, Michelangelo’s “Ideal head of a woman”, animals by Durer, Blakelock’s landscapes, and Lee Bontecou’s work.

If you had to represent the broadside of “Wreckage: By Sea (i)” with one word, what would it be?
Poet Gretchen E. Henderson: Pulsing
Artist Elizabeth Terhune: Seaweed, an intricate seaweed floating in the sea.

Read any good books lately?
Poet Gretchen E. Henderson: Having just returned from the &NOW conference, my mind is thrumming with bits and pieces of works by Steve Tomasula, Shelley Jackson, Wendy Walker, Tom La Farge, Rikki Ducornet, James Walsh, Lance and Andi Olsen, Stephanie Strickland, and many more, including those featured in the anthology The &NOW Awards: The Best of Innovative Writing.
Artist Elizabeth Terhune: Yes! The Best Dancer by Christoph Keller. They Came Like Swallows by William Maxwell. Loving by Henry Green. Quest for the Living God by Elizabeth A. Johnson.

Seen any good art lately?
Poet Gretchen E. Henderson: Yes! One delight was the entire print series by Salvador Dalí of Dante’s Commedia, seen in person, although catalogues, slides, websites, and texts have served as intermediary for most viewings of late. Another foray led through a medley of sound installations by Alvin Lucier, Ann Hamilton & Meredith Monk, Tim Hawkinson, Max Neuhaus, Cecilia Vicuña, Janet Cardiff & George Bures Miller, etc.—inspiring, even if virtually visited.
Artist Elizabeth Terhune: The Bacon show at the Met was pretty amazing. I also love it that people have sincere arguments over his painting. The Blake show at the Morgan just opened and it’s incredible.

Why do you consider collaboration vital?
Poet Gretchen E. Henderson: Something generative and generous happens when another artist takes time to participate in your work (and vice versa), not as a passive viewer but as an active participant. There’s communication, an exchange of aesthetics, a rapport with repertoire. For another poem from the “Wreckage” series, I collaborated with a printmaker on a letterpress broadside—transfigured with such variant materials and aesthetics, equally compelling! It amuses me to no end that one definition of “collaborate” means “to co-operate traitorously with the enemy” (OED). Helping suspend our (dis)beliefs, keeping us from becoming stuck inside our skins, collaboration becomes a political act and an act of play—which is why I admire the Broadsided venture, with its Vectors, inviting an ever-expanding assortment of individuals to partake in this artistic communion. To close, I’d like to extend an invitation to readers to participate in another collaborative project: http://difformite.wordpress.com/. Thanks!

Anything else?
Artist Elizabeth Terhune: Thank you to Gretchen Henderson for her wonderful poem and again, many sincere thanks to the Broadsided folks for making this all happen. 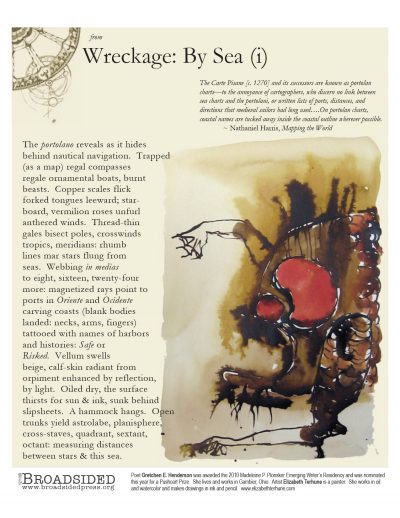 Poet Gretchen E. Henderson’s genre-bending writing was awarded the 2010 Madeleine P. Plonsker Prize (read the news), with recent work published in Black Warrior Review, Witness, New American Writing, Mantis, Caketrain, and Double Room, among other journals. Her cartographic interests developed thanks to a summer institute with the National Endowment for the Humanities, based at the Newberry Library.