What did you think an artist would pick up on from your poem?
Poet Ryan J Browne: I imagined the activities in the poem, of the officers, the dogs, and the inmates, would be the focus of the artwork, because those are what most people—myself included—find provocative about prisons. The bifurcation of the world inside, and the resulting interactions, isolations, and overlaps, are fascinating, terrifying, humanizing.

What inspires you in this poem?
Artist Douglas Culhane: The bits of action, characters and description all held together by a site. The poem has a “pure products of America go crazy” feel to it which I love.

Did the visual artist refract any element of the poem that made you see the poem differently?
Poet Ryan J Browne: Absolutely. After saying all that about the people who occupy prison (as well as the majority of my attention) and my expectation of what an artist would gravitate toward in the poem, Doug’s piece strikes me as a startling turn of awareness to the place of prison. After seeing the proof, I thought, Yes! This is what the poem is about! When I learned Doug was going to work on my piece, I found the other pieces he had done for Broadsided. I was so thankful; his style fits perfectly with the poem.

When you began this piece, was it color, shape, or some other aspect that you followed? Did that change?
Artist Douglas Culhane: I wanted to use the dog imagery, but it looked too illustrative, literal or cute. Instead I focussed on a detail from the text. I wanted an image that was sprawling and messy, yet specific.

What surprised you about this collaborative piece?
Poet Ryan J Browne: The clump of grass, roots, and dirt says more and more each time I look at it. I was also surprised at the seemingly intuitive amount of white space and how it captured my experiences in prisons: the inmates’ uniforms, the paint on the cinderblock, the floor tiles are all white. The vertical blades of grass along side the lines of poetry are also remarkable.
Artist Douglas Culhane: The softness of the drawing against the hard crisp type. This surprised me because I thought of the drawing as being very detailed and specific.

Have you ever written work that has been inspired by visual art? What was that experience like for you? Why were you inspired to do so?
Poet Ryan J Browne: Maybe this is a stretch but the most recent visual “art” I have seen that inspired a poem was a video in slow motion of a bullet shot through a rose. I happened to see my brother watching it and I became obsessed. I must have watched the video a hundred times. I’m not sure why I was so drawn to it.

If you had to represent the Broadsided of “Yard work” with one word, what would it be?
Poet Ryan J Browne: Exactly
Artist Douglas Culhane: Weedy

Seen any good art lately?
Poet Ryan J Browne: There is an artist out of Carnegie Mellon, Golan Levin, who specializes in “interactive art.” He has some really neat exhibits (and some great TED.com talks).
Artist Douglas Culhane: Yayoi Kusama at Gagosian Gallery (NYC), Bonnard at the Met.

Anything else?
Poet Ryan J Browne: I am honored to have been a part of this collaboration! Thank you Doug, Liz, and Mark for all your hard work! What a gift!
Artist Douglas Culhane: I have been drawing more from observation these days. It’s interesting that the poem I chose uses observation and description in a lyrical, imaginative way. 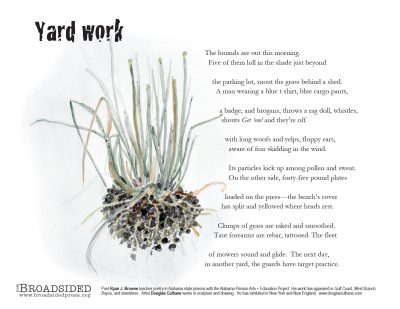 Poet Ryan J. Browne teaches poetry in Alabama state prisons with the nationally recognized Alabama Prison Arts + Education Project. He is a Colorado native and a graduate of the University of Alabama MFA program. His work has appeared (or is forthcoming) in Gulf Coast, West Branch, Bayou, and elsewhere.