Luisa A. Igloria’s parents taught her to read when she was three and also signed her up for piano lessons around the same age, she shares in an interview with Červená Barva Press. She continued with the lessons for the next 12 years, and says that she might have gone on to a conservatory, but luckily for her many readers, by that time she had fallen more in love with language and literature. Igloria, born in Baguio, Philippines, is the author of thirteen books, three chapbooks and, primarily a poet, has won many awards for her writing. Since 2010, Igloria has written a new poem every day, a practice she shares on the literary blog Via Negativa, and a number of those poems have found their way into this collection.

Igloria is a poet of bounty and abundance. Her poems lead the reader through a grand array of subjects and points of view. In the foreword to Ode to a Heart Smaller than a Pencil Eraser, Mark Doty describes her poems as “drunk on the world’s bounty,” and “a three-way marriage of perception, emotion and reflection” (ix). Thinking of her musical training, one could hear the poems as orchestral, with a wealth of sound and image in the hands of a master conductor or as the joyousness of an extended run on piano keys, from the foundational bass notes up through trills and ornaments of the highest tones. Indeed, the perfect way to read the book is aloud, moving from poem to poem with the musicality of Igloria’s writing.

In “Certified,” a poem first published at Broadsided Press, Igloria uses the format of a persona poem—that is, the poet speaking through the voice of another—to write into the lives and work of immigrants who clean workplaces, tend to the elderly, pick fruits and vegetables, labor in factories; and the poem accomplishes with its last line (“…the bile I drop/into the soup to make me strong”) what Sabina Murray describes on the book’s back cover as hiding “beneath their gorgeous scrims, a bristling wall of spears.”

As accessible and beautiful as Igloria’s poems are, they do not shy away from the violent and difficult in our daily lives, just as in “Grenadilla:” (28)

that licks the skin with thorn and bone,
I’ve always loved what knows to fold

the piquant tendril in the sweet—
ginger with anise, torn basil with lemon,

…Shake the purple rind of the grenadilla,

In addition to Igloria’s profound attention to detail and her polymath-level of interest and engagement in everything in the universe, her poems can also contain a sometimes gentle, sometimes broad wit and humor. The “Letter to…” poems on pages 37-39 are short, often sardonic masterpieces that engage in turn with “Providence,” “Arrhythmia,” and “Levity.”

“Hallucinatorio,” the final poem in the book, is a recitation of dreams structured in numbered stanzas with the epigraph: after Roberto Bolaño’s “A Stroll Through Literature.” Igloria ends with:

10. The poet leaves: she is outcast from her hometown. Does she
drink? Chew betel nut leaf? Swear like a cargador at the pier?
Gamble away her children’s inheritance? Smoke cigars with the
lit end in her mouth? Take lovers, including her maid? Wear
only pants? Burn her bra? You have no imagination if you
think this is all it takes to be a poet.

If you are interested in learning what it really takes to be a poet, read Ode to a Heart Smaller than a Pencil Eraser, it will be time well spent.

Bsided: “Certified,” along with several others in the book, are persona poems. Is this a favorite form of yours? You have also included ghazals and epistolary poems; what do you like about writing in form?

Igloria: I think writing in form is not only fun or challenging but also a way to remind myself that when we think of the radical or contemporary in poetry, we might not immediately associate those things with tradition. But any new act of making has to acknowledge in some way the connection to what came before us. Form becomes the room in which you can consider what you can use and how to use it, despite the outward limitations. As for persona poems, they teach me about how to pay attention and listen to the sounds of voices other than my own.

Bsided: Your book The Buddha Wonders if She is Having a Mid-Life Crisis (Phoenicia Publishing, 2018) was published recently. Do the poems within it represent your own questions “written slant”?

Igloria: Emily Dickinson said “tell the truth but tell it slant,” and I believe writers (and readers) are always carrying around our own wheelbarrow of questions and obsessive subjects, trying to figure out how to approach the questions that come with them. For instance, I wonder whether I’ve been a good parent. I wonder if I could’ve made better financial decisions. I wonder how to prepare for eventual aging and death. And so forth. As I’ve said elsewhere in relation to this book, I’m not Buddhist, but I find a great attraction to some of the themes and stories in Buddhism. For instance, I often hear people say things like “The Buddha in me greets the Buddha in you,” by which they mean that every living being already carries the seeds of transcendence in them. I’m fascinated by that idea because I feel, just like others, that I’ve made mistakes, even experienced regret. But it’s reassuring to think of how we can keep working at it, even from the limited or tangential perspectives we have.

Bsided:  Are you still writing a poem every day, and do you have another book or project in the works?

Igloria: November 2019 will mark my ninth year of writing at least a poem a day. I’ve come to truly love it and look forward to it; I’ve gotten at least 4 full length collections out of this daily practice. And yes, I am working on a new manuscript, which is partly about the ways in which (im)migrants and other people from formerly colonized countries experience geopolitical, economic, environmental, personal, and other crises today—and how these were already blueprinted hundreds of years ago, at first contact.

Kali Lightfoot (www.kali-lightfoot.com) lives in Salem, MA. Her poems and reviews have appeared in journals and anthologies, and been nominated by Poetry South and Lavender Review for Pushcart Prizes. Her first poetry collection will be published by CavanKerry Press in April, 2021. 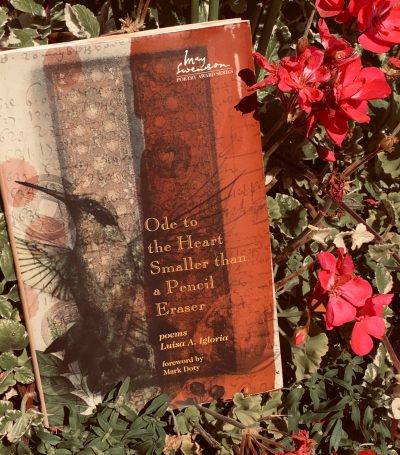