An essay exploring the spirit of broadsides and the possibilities they can open for students:

When I teach broadsides in my poetry classes, I welcome the biggest interpretations of what a broadside is or can be…. It’s as much an architectural form as it is a literary one. I love asking for whom (or for what) a broadside is for.

When I think of the broadside, what immediately comes to mind is its down-and-dirty origins: a single sheet of paper handed out in the street, quickly and cheaply printed in mass quantities—a mode to convey a focused opinion, political concern, advertisement, satire, a bit of intrigue. As far as dispensing information to the masses, the broadside of 500 years ago is our modern-day Tweet. I delight in tracing this form through its hundreds of years, especially considering that, at some point, artists co-opted this crude format and transformed into an artform. What was once a single, disposable sheet became something one can spend an entire paycheck on, frame, and leave in a will.

At the end of the day, it’s the middle ground of this tradition that appeals to me. Broadsided Press situates itself somewhere between the quick-and-cheap sheet and high-end framability (I love the idea of thoughtful art and world-class writing meeting a sheet of paper that anyone, nearly anywhere, can print out and tack to a light post for the cost of a postage stamp).

I want to take this a step further and imagine the spirit of the broadside as the written word occupying a public space.

Someone, somewhere, right now, is taking a piece of chalk to a sidewalk and writing out an original poem or quoting a befallen freedom fighter or crafting a political pun or jotting out a few beautiful lines from Issa regarding the changing season. Someone has just spray-painted a phrase from her favorite Sappho fragment on a brick wall. Someone just leased billboard space in The Middle of Nowhere Texas to print the Theodore Roethke lines “Money Money Money  / Water Water Water.”

When I teach broadsides in my poetry classes, I welcome the biggest interpretations of what a broadside is or can be. I’m constantly surprised and inspired to see what my students come up with (everything from stenciling text onto umbrellas to reserving time in a proper print shop to getting a temporary tattoo of Walt Whitman’s line “I sing the body electric”).

I always encourage students to think about limitation as the essential building block that binds all art and artists together. If you’re broke, then working within the reality of the 8 ½ x 11 piece of common printing paper is the perfect place to start (and it’s a medium with a rich history). If you have access to a junkyard, how might a heat shield pried loose from a catalytic converter be used to hold a few original lines of poetry musing on the night sky?

the broadside is as much an architectural form as it is a literary one.

In the end, the broadside is a conversation between form and content; and it’s also a conversation between the visual and the written. It’s as much an architectural form as it is a literary one. I love asking for whom (or for what) a broadside is for. If it’s to elevate fine art with fine art, then printing on a Heidelberg letterpress with a sheet of $100 Japanese paper is one way to go. But broadsides are also meant to interrupt, to challenge, to insert themselves, to break expectations, to cry out.

I once had a student show up late to class with a nasty used pizza box and a poem written across it in Sharpie. At first I dismissed it, but on closer inspection I saw that he had scrawled out the opening of A.R. Ammons’ masterpiece Garbage. What I mistook for laziness was actually a well-realized gem weighing artistic expectation against cheap consumerism. Clearly, he’d put great care into his decision-making process. And his project cost virtually nothing to produce. It still sticks with me, not only because it was clearly intellectual and quite clever, but because I had dismissed it so quickly. I broke the golden rule of thinking about broadsides—I hadn’t weighed form and content together; I’d simply looked at form.

I’ve given no instruction here for teaching the broadside, for none is needed. Like poetry itself, the impulsive and obsessive engines that give each of us an artistic voice is a great place to start. I like to ask these simple questions to my classes:

What poems do you love? What objects (paper, t-shirt, clay, Walmart receipt, tax return envelope, full-length mirror) do you have access to? How can text and object be fused together to create a conversation, to create meaning? How will others have access to what you’ve made?

In the end, the broadside is pure adventure. It’s always been a form that yearns to connect with a broad audience. And it’s always been a bit subversive—thankfully, I don’t imagine that will ever change.

Do you have a teaching exercise that uses Broadsided?  Would you like to share?  Whether it’s for primary school students, a retirement community, a homeless shelter, or a university course, we’d like to offer it here so that teachers can learn from each other.  You can contact us through the email address on this page. 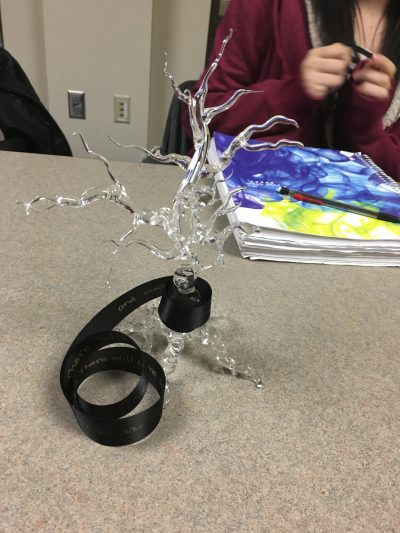 Michael McGriff is an editor, translator, and author of both prose and poetry, including Home Burial, Dismantling the Hills, and the recent Early Hour, a book-length sequence of poems inspired by German Expressionist Karl Hofer’s 1935 painting (Frühe Stunde) of the same name. He teaches at the University of Idaho.