An essay/lesson plan exploring the spirit of broadsides and the possibilities they can open for students in prisons and jails, as well as university students responding to such poems:

My gentle suggestions to the group of women I was working with [at the correctional facility] was to focus on what they had swallowed in their recent lives, and what they refused to swallow anymore… I gave my [university] students this assignment: “Imagine you are writing a letter to the author, or connecting with the concepts of routine and confinement, even as we all keep in mind that we are privileged in relation to these folks. Use one piece of the image, or all of it, as an influence.”

In April of 2020 I had in my hands—my virtual hands at least— a broadside created from a poem written by a jailed student of mine named Heather, “I Swallowed.” The art, a sundial on a background of scattering sand, was created in response to the poem by artist Lisa Sette. I’d worked with the poem’s author, Heather, at the Skagit County Community Justice Center jail, a facility at the time in lockdown due to the coronavirus.

The day Heather wrote this poem, my class at the jail read “I Swallowed an Iron Moon,” a poem written and leaked out from the Foxconn electronics sweatshop in Shenzhen, China, and one that explored the essentially forced labor of the author. At twenty-four, the author, Xu Lizhi, committed suicide, jumping from the Foxconn dormitory where he and hundreds of other workers were shut in. In response to the suicide rate at their plant, Foxconn executives built a net around the facility to catch those who jumped.

Half a world away, and in a very different place, my poets at the jail instantly grasped the “swallowing” Xu Lizhi wrote about. Words poured out of them. A life of helplessness and no clear or free future spoke to them even though their lives, and the author’s, were in most ways so different.

My gentle suggestions to the group of women I was working with was to focus on what they had swallowed in their recent lives… and what they refused to swallow anymore. Heather’s poem begins “I swallowed my faith. They called it a judge’s ruling.” Heather’s poem wound around to the refusal: “But I refuse to swallow anymore because/little do they know I am an amazing mom.”

I brought this broadside to an advanced writing class at my university, taught online due to the coronavirus pandemic. My university students were privileged in light of Heather’s situation, but in their own way they were locked in, helpless, facing an uncertain future. We discussed Heather’s poem and Xu Lizhi’s as background, and I asked them to respond creatively to both the art and the poem. I suggested that they keep in mind that the art sprang from the words, and to think of it as kind of a metaphor for what the poem was doing.

I gave my students this assignment: “Imagine you are writing a letter to the author, or connecting with the concepts of routine and confinement, even as we all keep in mind that we are privileged in relation to these folks. Use one piece of the image, or all of it, as an influence. Think of it as an image that might spring out of your words.”

My students responded to this poem as my jailed women responded to Xu Lizhi. Words poured out of them: you deserve the joy of finger painting and gapped teeth one wrote to Heather, and another, considering the image, wrote “The hands will go around and around. Dip down toward six, crawl up to nine, and start all over again at twelve.” From their own place of confinement, lost wages, and blurred futures, my students both met the poet where she lived and acknowledged the unique tragedy of her situation.

I found situating the poem in terms of its own genesis and that of the author who created the poem that began the prompt gave my students a lot of direction for writing their own poems.

Ideas for Teachers Using “I swallowed my faith”

Here are some ideas, that students can use entirely, or among which they can pick and choose: 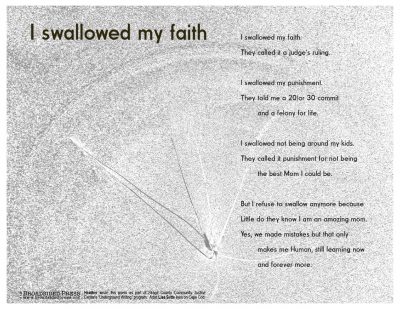 This lesson plan is tied to the Spring, 2020 “Inside Voices” special feature.  See all the broadsides here.

We’d also like to highlight the resources of Jill McDonough.  Jill is a poet and professor who has worked in prison, jail, and juvenile facilities for more than twenty years. With her MFA students at UMass Boston, Jill offers College Reading and Writing in two Boston jails.  They post their weekly exercises/lesson plans/handouts on this blog; most of them are based on Bullets into Bells, an anthology of poetry on gun violence and responses to the poems by survivors: Jail McDonough