Who is posting the Vectorizations on the Broadsided Instagram?  We’d like to introduce you.  The Vectors-at-Large go out into their neighborhoods (in Miami, Chicago, Boston, and Los Angeles) and find interesting, engaging places  to post broadsides. Love letters to the world, they inspire us all to bring art and  literature to the streets of our communities.

To welcome the new year, we asked each of them to choose a quote that matches her artistic vision and explain their vectorization goals.

I’ve recently discovered Alejandra Pizarnik’s works and have become quite obsessed since. I chose these lines precisely for the lack of “clear” artistic direction, since this allows for so much more possibility—what is poetry, if not that? My artistic vision aims towards uncovering, experimenting, looking for the “place where what isn’t may be,” and to also continue taking risks.

I’m currently working on my graduate thesis, and within my project, my poems seem to defy the limited structure of the physical spaces of a standard page. I plan on learning how to create a more cohesive and grounding way to choral my poems into a bigger realm, one which demands breathing space—my poems require not only attention to detail, but also room for the psychological heaviness and anxiety/ (ies) to become infused into the manuscript without letting the content/formal chaos manifest.

Ever since I happened upon this quote freshman year of college, it’s become a guiding principle of my writing. I’ve always been in awe of the power words held and how they can evoke such visceral reactions—a choked up throat, shivers down a spine, or hastily smothered giggles—but I could never figure out why until I saw it on the computer screen, crystalized in lyricism. It’s not enough to simply put words on the page; they must be extensions of one’s innermost thoughts. Sometimes I’m afraid of doing so because of what rise to the surface, but one of my goals for the new year is overcoming that fear of vulnerability. Emotions are how writers connect with others. I want my writing to stay with readers long after the final sentence.

“Completing a work of art necessitates a struggle to create balance and symmetry” – “I: New and Selected Poems” by Toi Derricotte

This quote, a line from Derricotte’s “An Apology to the Reader”, speaks to my goals as a writer for 2020 because it addresses a poet’s desire for narrative wholeness. Within context, the quote recognizes an artist’s goal for perfection and the piece goes on to say that poetry is visceral, that poetry “that should be–even must be–given space” allows a certain level of balance and symmetry between craft and passion, alike. I want to let poetry in, to allow writing to “recreate a sense of entitlement” for me as I enter the new year. I will learn to write unapologetically, like Toi Derricotte, with attention to technique as well as instinct, since they are both crucial to the creation of poetry.

A few years ago, I attended a reading by Rowan Ricardo Phillips. In his Q&A, Phillips said something that I haven’t been able to shake since: “no one is waiting for your work.” It struck me, then, that I’d often thought of singularity in writing or art as a means to an end, that singularity was the point itself. I think Phillips suggests instead that singularities—differences in life experience, practice, belief, culture, and craft—are a means to create, recognize, and
continuously reify a collective narrative that is still far from complete.

Would you like to join this dynamic team?  Let us know! Just email broadsided@gmail.com to begin. 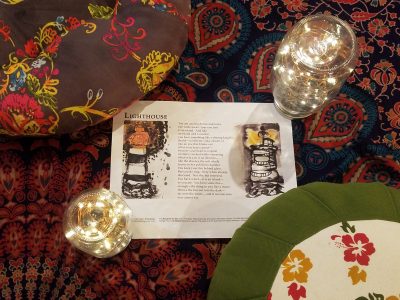