Tiffany Midge, who was guest editor for the Broadsided Press Responses feature for the Water Protectors at Standing Rock, took her work one step further.

In June, 2017, she hosted the 5th annual Broadsides on the Buses exhibit, where the collaborations by poets and artists that she curated currently ride throughout the town of Moscow, Idaho.

The broadsides were printed tabloid sized, framed, and shown for the evening above a star quilt.

Tiffany Midge opens the event by introducing and providing a space for pieces such as “Stand,” “Shadow Road,” “Snake Dance,” and “Night Watch, Cannonball North Dakota” to become alive and visible to a broader audience at Moscow’s art walk, a downtown event that successfully brought many people to participate in witnessing art and activism.

Photographer Theo Van Alst, Jr, who created the images for all the broadsides, came for the event to discuss his collaboration with the poems, creating original renditions of landscape images, such as the “sun setting” in response to the piece “Stand,” as a metaphor for resistance, or the “panoramic vistas” in “Shadow Road,” which reflect “memories of the prayer songs,” via a road, or a stretch of river that leads to cleansing, to hope.

CMarie Fuhrman presents her poem “Stand,” recording the weight of contrasts, between brown and white, in the environment (a tree’s roots, or a young fawn juxtaposed against the backdrop of the snow) and that of the bodies (“little brown / girls […]), (“Brown limbs, white / limbs”) and the resistance of fighting to stand:

another rising, another
copse of brown limbs feels the white
weight and fights once again to survive.

Gary Dorr, Nez Perce Chairman, and activist from Standing Rock is seen outside chalking “Still #NoDAPL No K(eystone)XL” at a public play area during the art walk, a downtown event that successfully brought many people to participate in witnessing art and activism.

The installation at the transit center will stay up for another few days, where the broadsides will not only transport via the local buses, but also within the town’s public library, city hall and/or local coffee shop.

This event was sponsored by the Moscow Arts Commission and SMART Transit invite you to the Artwalk 2017 reception at the Moscow Intermodal Transit Center from 4-5 pm on June 16, featuring a reading, textile and wearable art, sculpture installation, and the 5th-annual Poetry on the Buses exhibit.

The reception included a poetry reading by Tiffany Midge, City of Moscow Poet Laureate and author of the award-winning collection “The Woman Who Married a Bear”; Alexandra Teague, author of the novel “The Principles Behind Flotation”, and poetry collections “Mortal Geography”, and “The Wise and Foolish Builders”; and C Marie Fuhrman at 4:15.

Guest editor Tiffany Midge’s poetry collection The Woman Who Married a Bear (University of New Mexico Press) won the Kenyon Review’s Earthworks Prize for Indigenous Poetry. She is a humor columnist for Indian Country Today and an assistant poetry editor for The Rumpus. Her work is featured in McSweeney’s, The Rumpus, Waxwing, Okey-Pankey, and Moss. She is an enrolled member of the Standing Rock Sioux (Hunkpapa Lakota). Follow her on Twitter @TiffanyMidge 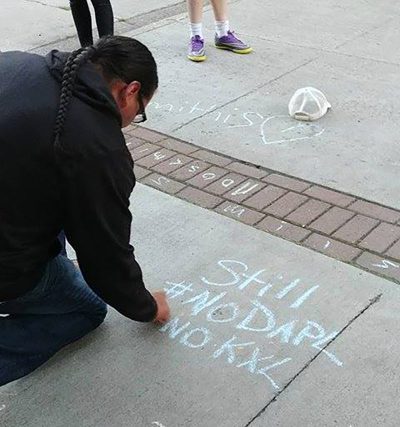