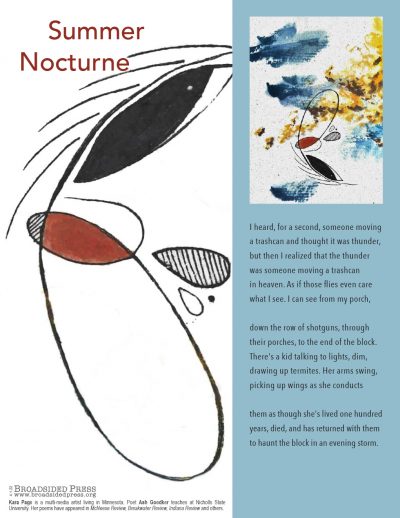 Artist Kara Page: The line “As if those flies even care what I see” had me hooked immediately. Poet Ash Goedker: In grad school I wrote an ekphrastic poem for the first time after having a class at an art museum. I struggled at first, because I thought it had to be so exact, but then I realized that it just needs to be a conversation, and I sort of fell in love with this as a prompt and continue to attempt writing more ekphrastic poetry. 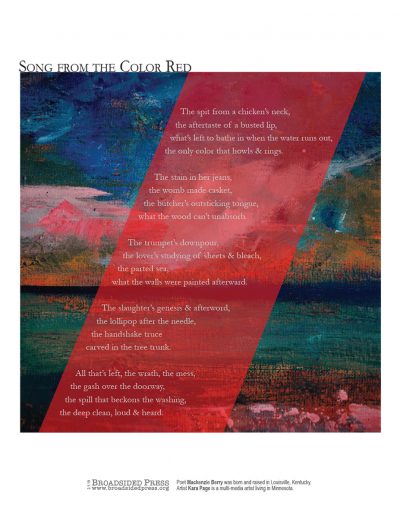 “Song from the Color Red”

Collaborators’ Q&A: Poet Mackenzie Berry:  I love art that interrupts and disrupts and invites stillness. Artist Kara Page: Rather than focusing on the negative aspects of red I wanted to showcase red in a more gentle light.

Poet Mackenzie Berry is currently in the 10th cohort of the First Wave Hip Hop & Urban Arts Program at the University of Wisconsin-Madison and recently served as a Wisconsin Idea Fellow. She has been published in Vinyl Poetry and Prose, Hobart and Up the Staircase Quarterly. Artist Kara Page is a multi-media artist living in Minnesota. 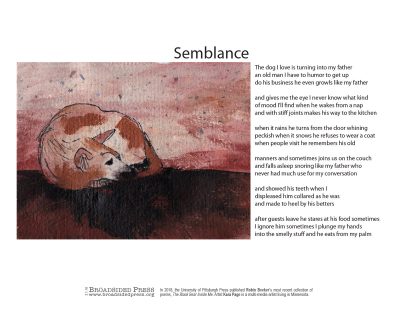 Collaborators’ Q&A:  Artist Kara Page: I wanted to use warm colors when I read this poem. I think of warm colors as welcoming, but there is another side to them that reflects more intense emotion, like anger or passion.  Poet Robin Becker: By choosing red as the dominant color, Kara emphasized the “blood” connection between dogs and people.

Artist Kara Page is a multi-media artist living in Minnesota. Poet Robin Becker‘s newest collection of poems is The Black Bear Inside Me, forthcoming in March, 2018. It includes this poem. 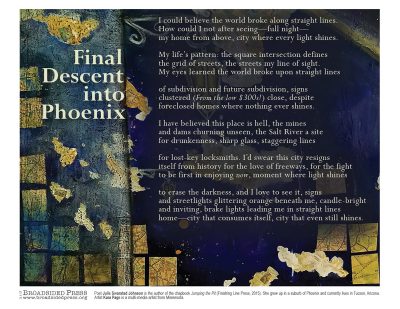 Collaborators’ Q&A: Poet Julie Swarstad Johnson: Paired with the playful squares and the drifting bits of paper (or maybe they’re clouds—it changes every time I look!), those gorgeous, intricate streetlights peeking out from behind the text gave me a new feeling for the poem. Artist Kara Page: I was inspired by the idea of looking at the world via a bird’s eye view, except I took it to the extreme hence seeing the globe rather than a city. I had the idea of seeing the lights on earth at night more so than the actual earth.

Artist Kara Page is a multi-media artist living in Minnesota. Julie Swarstad Johnson is the author of the chapbook Jumping the Pit (Finishing Line Press, 2015). She lives in Tucson and works at the University of Arizona Poetry Center. 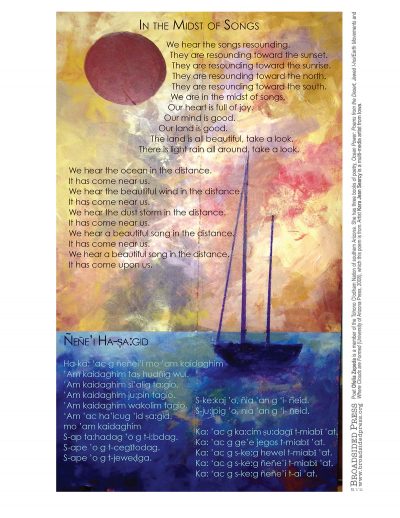 Collaborators’ Q&A: Poet Ofelia Zepeda: The surprise was the image. As the creator of the poem I have certain images that helped me generate the poem; there are also sensibilities that I have to a certain landscape and also a cultural understanding of the landscape that directed me to write this piece. Artist Kara Page: I liked both languages on the piece. It adds another layer of beauty, and I almost felt as though I would still understand the poem even if it hadn’t been in English because of the painting.

Poet Ofelia Zepeda is a member of the Tohono O’odham Nation of southern Arizona. She is the author of three books of poetry. Artist Kara Page is an acrylic painter who grew up with the sagebrush and dust of Idaho. 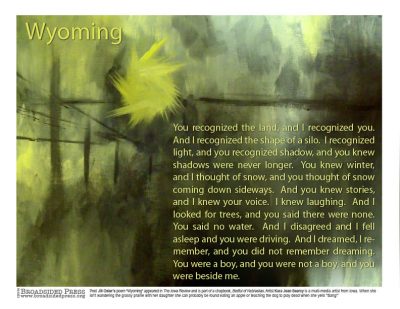 Collaborators’ Q&A: Artist Kara Searcy: I like that not only did the author write about dreaming, but that the poem had a dreamy quality. I wanted to capture that dreamy quality in the painting. Poet Jill Osier: I think everything about the sun surprised me… I love it… Maybe it’s because Wyoming suggests horizons to me, and here the sun seems to say “now” and “here”…

Poet Jill Osier is the author of two chapbooks of poems. Her work has been supported by the National Endowment for the Arts, the Wisconsin Institute for Creative Writing, the Rasmuson Foundation, and Phillips Exeter Academy.  Artist Kara Searcy is a multi-media artist from Iowa. 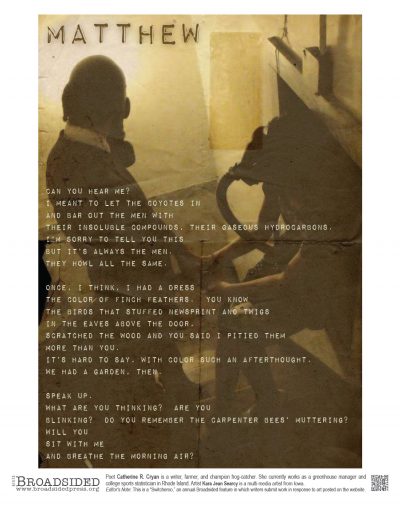 Collaborators’ Q&A: Poet Catherine R. Cryan: There are so many opportunities for stories in this image. The hazy quality invites peering closer, first to make out the dimly-lit scene, then to ask the hows and whys. Artist Kara Searcy: I had wanted the piece to capture that we live in broken world, but that there is life and hope in the midst of struggle as people walk the narrow path of life.

Artist Kara Searcy is a multi-media artist from Iowa. Poet Catherine R. Cryan is a writer, farmer, and champion frog-catcher. She currently works as a greenhouse manager and college sports statistician in Rhode Island. 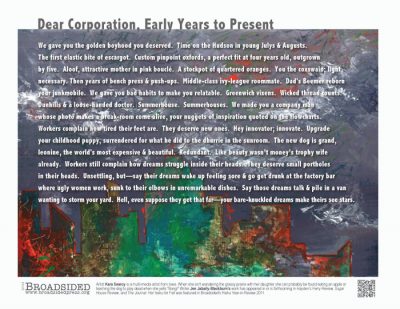 Collaborators’ Q&A: Artist Kara Searcy: The line “workers still complain how dreams struggle inside their heads” was a large part of what pushed me towards a painting that seemed to hide something beautiful.  Poet Jen Jabaily-Blackburn: I love how the buildings have this weird otherworldly color against the grey background, and seeing that the buildings are made of sheet music, that’s just gorgeous—a glimpse of almost invisible music.

Poet Jen Jabaily-Blackburn lives in the beautiful Pioneer Valley of Massachusetts with her husband and their dog. Artist Kara Searcy is a multi-media artist from Iowa. 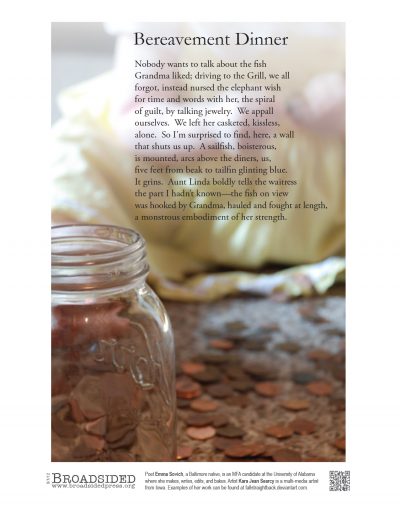 Collaborators’ Q&A: Poet Emma Sovich: This may sound strange, but I never really thought of this as a domestic or nostalgic poem until it got paired with this art. Artist Kara Searcy: I was surprised by how the photograph seemed to take on a kind of hopefulness which was contrasted by the melancholy mood the poem initially starts out with.

Poet Emma Sovich, a Baltimore native, edits Black Warrior Review and is an MFA candidate at the University of Alabama. Artist Kara Searcy is a multi-media artist from Iowa. 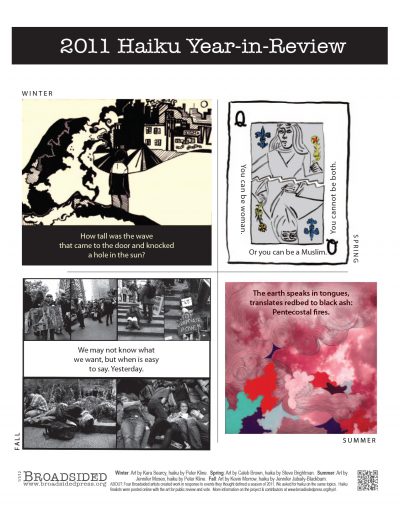 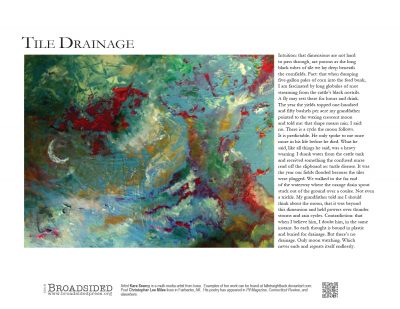 Collaborators’ Q&A: Poet Christopher Lee Miles: I think this abstract, but very concrete, piece reflects, and refracts, the elements swirling in the poem, from the relationships to the syntax.  Artist Kara Searcy: At first I thought I would paint a scene from the poem, but as I let the painting move, the simple image of the moon seemed to be what the painting wanted to focus on.

Poet Christopher Lee Miles grew up on a small farm in Minnesota and served four years in the US Navy. He was a finalist for the 2011 Ruth Lilly Fellowship Prize. Artist Kara Searcy is a multi-media artist from Iowa.