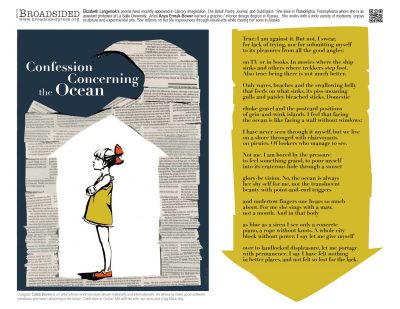 Collaborators’ Q&A: What inspires you in this poem? Artist Anya Ermak-Bower: The author’s spirit. The strength to stand up against the mainstream perception of the subject and lay out her feelings bluntly. Poet Elizabeth Langemark: …Anya’s work reminded me of something I know in theory but am always surprised by anyway: that what the poet thinks a poem is about doesn’t necessarily matter. I was used to thinking of this poem as about the ocean but her interpretation seems to focus on the speaker, which I see now is absolutely accurate.

Poet Elizabeth Langemak‘s poems have recently appeared in Literary Imagination, The Beloit Poetry Journal, and Subtropics. She lives in Philadelphia, Pennsylvania where she is an assistant professor at La Salle University. Artist Anya Ermak-Bower earned a graphic / interior design degree in Russia. She works with a wide variety of mediums, enjoys sculpture and experimental arts. Designer Caleb Brown is an artist whose work has been shown nationally and internationally. Caleb lives in Groton, MA with his wife, two sons and a big black dog.