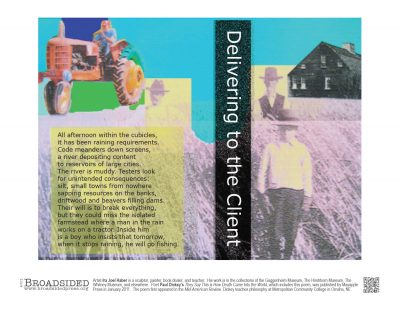 “Delivering to the Client”

Collaborators’ Q&A: Poet Paul Dickey: That the artist depicted quite accurately, I think, many other farm poems I have written and a theme in which I thought I had tired of and had avoided in this poem. Somehow perhaps he saw beyond the images of this particular poem to the unconscious essence in many of my earlier farm poems and which still informs the current one. Artist Ira Joel Haber: This is the first broadside that I’ve done that was a completely new work. For previous collaborations I’ve worked with existing art works and then played with them in Photoshop, changing them. But with this one I began by doing a series of collages based on the images that I picked up and out of the poem, and farms and nature stood out for me, so I based my collages on that.

Poet Paul Dickey’s They Say This is How Death Came Into the World was published by Mayapple Press in January, 2011. Paul Dickey holds a Master of Arts degree from Indiana University, Bloomington in the History and Philosophy of Science. Artist Ira Joel Haber was born and lives in Brooklyn, New York. Currently he teaches art at the United Federation of Teachers Retiree Program in Brooklyn.