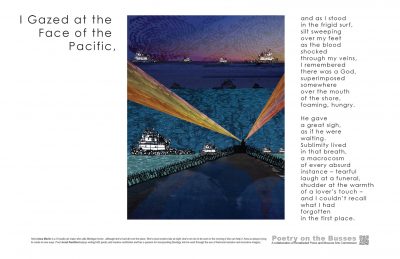 “I Gazed at the Face of the Pacific”

Artist Anna Marlin is a UI studio art major who calls Michigan home…although she’s lived all over the place. Poet Jonah Sandford enjoys writing both poetry and creative nonfiction and has a passion for incorporating theology into his work through the use of historical narrative and evocative imagery.

Tagged: On the Bus, Religion / Spirituality