Why did this piece of art resonate for you or seem like it would give you an avenue into writing about Japan’s earthquake and tsunami?
Poet Susan Cohen: I found “Children at Play” wildly imaginative, yet so strange and disturbing. When I made myself address it, that sense of being disturbed turned into a deep grief. I had a nephew who died a few years ago at sea and whose body later washed ashore, so I’m especially haunted by the idea of children in the waves. As I wrote, I realized I was hearing sounds of bicycles and surf and kids playing before supper, that the visual image had a strong aural effect on me. Was that triggered by the incongruous bird perched on the bicycle? I don’t know, but I found myself wanting to intone or chant, which made this poem very different from those I usually write.

What do you think is the role of art in regards to real-world, real-time events? In other words, what makes a “successful” occasional or political piece of writing or art?
Poet Susan Cohen: Real-world events disappear so quickly and completely from the news. Perhaps art contains the capacity to focus our attention at least a little longer. 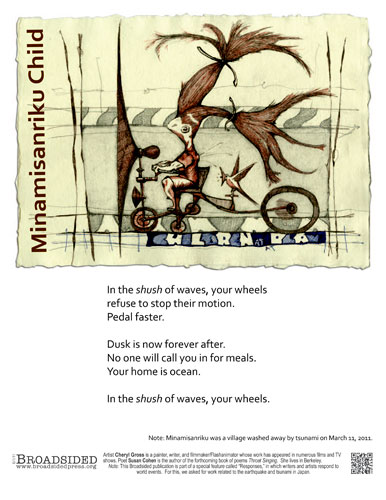 Artist Cheryl Gross has an MFA in New Forms from Pratt. She writes: “When asked about my work, I always equate it with creating an environment transforming my inner thoughts into reality. Much like an architect or urban planner, that reality and humor becomes the foundation of the work. Beginning with the physical process, I work in layers. Born and raised in Brooklyn, New York, my urban influence has indeed added an “edge” to my work. Coming from a totally vertical and intense environment, I now live in Jersey City, NJ.” www.cmgross.com

Poet Susan Cohen is author of the forthcoming book of poems, Throat Singing, and two chapbooks. Her poems have appeared in Poetry International, River Styx, Southern Poetry Review, Verse Daily and elsewhere. She lives in Berkeley and is two-time winner of the National Association of Science Writers Science in Society Award.

Filed under: Earthquake and Tsunami in Japan, 2011