What made you think of Broadsided for this poem?
Poet Stephanie Rogers: I’ve never had a broadside printed, and I love broadsides. I love the idea of handing a broadside to a friend or family member—someone who doesn’t necessarily read much poetry—and seeing their reaction. When I showed my family this broadside, including my young nieces, the unanimous response was, “Wow, that’s so cool!” I just love that, including how intimate a broadside feels.

What inspires you in this poem? What drew you to it?
Artist Millian Pham Lien Giang: The repetition of words, the image of the moon not making a single sound, and the resulting inner reflection all make me think of common silent inner struggles for loud outward concerns. It’s a relationship between inside and outside, natural forces and human struggle, and astronomical versus human scale.

Describe your dream “Vectorization”—where, in your wildest dreams, would you most like to see this broadside posted in the world?
Artist Millian Pham Lien Giang: This would be great on everyone’s walls at home.
Poet Stephanie Rogers: I’d post it outside every Weight Watchers (WW) meeting and make it required reading before entering. Fat women especially need to begin seeing and hearing about fatness outside the context of body hatred. In writing this poem, I wanted to evoke feelings of acceptance, meditation. I wanted fat women to picture a fat woman writing a poem about fatness and the moon, and I wanted them to just think about that image for a few minutes without judgment.

What did you think an artist would pick up on from your poem? Did the visual artist refract any element of the poem that made you see the poem differently?
Poet Stephanie Rogers: Because the poem deals so explicitly with the moon, I thought the moon may show up in the artwork. And yes, the way the artist imagines the speaker of the poem as part of the moon in a way—that really grabbed me and made me think about the similarities of what characteristics we attribute to the moon (as powerful, for instance), and how the speaker may share those traits.

Did anything shift for you or come into new light once you saw the poem and art together on the page?
Artist Millian Pham Lien Giang: When first reading and rereading the poem, I thought it was mostly about body image. But after much reflection before, during, and after making the artwork, and then seeing the pairing of art and poetry on this broadside, it’s more than just about body image. It’s about self-image and the self’s relation to all these outside forces.

Have you ever written work that has been inspired by visual art? What was that experience like for you? Why were you inspired to do so?
Poet Stephanie Rogers: I haven’t! I think I’ve always felt a bit intimidated by that, unsure whether I could create something that lives up to the art. But I’ve always wanted to try.

If this broadside were a type of weather, what would it be?
Poet Stephanie Rogers: I imagine it begins with a slow and steady drizzle in warm air, until it picks up, and those fat raindrops fall over everything.
Artist Millian Pham Lien Giang: Midnight rain during a full moon.

Read any good books lately?
Poet Stephanie Rogers: I’m currently reading Aubrey Gordon’s new book, What We Don’t Talk About When We Talk About Fat, and I’m in love. It’s everything I’ve ever wanted someone to tell me about fatness, mainly that I, as a fat person, am not required to fall in line, to spend my life dieting myself to an unsustainable level of thinness, and that I’m not unworthy of love and respect simply because of my body size. As far as poetry goes, I’m returning to Kerri French’s Every Room in the Body and Frances McCue’s The Bled—two of my all-time favorites. They both deal with grief in new and arresting ways, and both books have gotten me through difficult times.
Artist Millian Pham Lien Giang: Unfortunately my reading habit has taken a tumble during this pandemic. I’m mostly reading pedagogical materials in preparation for remote and online teaching. A book that I’ve been wanting to sink my teeth into is Meg Jay’s Supernormal: The Secret World of the Family Hero.

Seen any good art lately?
Poet Stephanie Rogers: My husband and I saw an exhibit of Ernst Ludwig Kirchner’s work when we lived in New York City. I wasn’t too familiar with his art, but when I was surrounded by it in the small museum space in the Neue Galerie, I felt mesmerized. I grew up in Middletown, Ohio, a tiny city—now made semi-famous by J.D. Vance in his book Hillbilly Elegy—where most residents have some connection to the local steel mill. I wasn’t raised with art, with literature. I learned fairly early on that I loved music, and I pursued that well into my college years, but I didn’t truly discover art (or even go to museums) until I moved to Brooklyn in 2007. And my husband studied a little art history in school, so he’s introduced me to some artists. We recently saw a photography exhibit at the Brooklyn Museum of one of his favorite photographers, Garry Winogrand. It showcased his street photography, specifically Winogrand’s rarely seen color photos.
Artist Millian Pham Lien Giang: I’m so fortunate to be teaching at Auburn University starting this fall 2020 semester, where our departmental gallery has had two wonderful shows from a diverse score of artists touching on issues of pandemic living, race, culture, election, parenthood, gender, and politics. I’m especially impressed with the works of the following artists in the exhibition “Time Change / Change Time: Natalie Baxter, Laura Brown, T.J. Dedeaux-Norris, Helina Metafaria, and Antoine Williams.” Their works are poignant and relevant to current conversations on race and politics.

Anything else? (Here, we invite the collaborators to invent a question, add a comment, or otherwise speak to what the questions so far have not tapped about their Broadsided experience).
Poet Stephanie Rogers: I asked my niece to reread the broadside to see if she had any questions for me. She asked, “Why did you write this poem?” I told her that I enjoy writing in form, particularly when working with the subject of fatness, because the formal constraints often feel like trying to squeeze a fat body into an airplane seat. And the moon always comes up with me. I can’t get rid of it in my work. I suppose I leaned into this one to silence my obsession for a moment.
Artist Millian Pham Lien Giang: Like the other broadsides I had the pleasure of working with for Broadsided Press, I dragged my feet in overthinking the art for this broadside a bit. I wanted something that complements the poem. Something that, instead of merging into and illustrating the poem, adds to the conversation. I wanted to retain the identity of the poem and the art, so the sum of those two parts becomes something new in their pairing. I’m very happy with that end result. 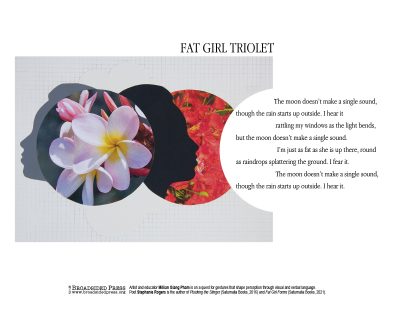 Millian Pham Lien Giang is a visual artist and educator. When she’s not preaching and teaching the finer points of fine art, Pham focuses on many modes of visual art perception in her practice. Overlapping themes of gender, class, and culture are captured through images, objects, and events in her work. altimablossom.net
Image:  “Lunar Eclipse: Plumeria and Poinciana,” Mixed Media Collage, 11 x 15 in, 2020

Poet Stephanie Rogers grew up in Middletown, Ohio. She was educated at The Ohio State University and the University of Cincinnati, and her first collection of poems, Plucking the Stinger, was published by Saturnalia Books in 2016. Her second collection, Fat Girl Forms, which focuses on living as a fat woman in a culture that unapologetically hates fat women, is forthcoming from Saturnalia Books in 2021.