What surprises you about Laura’s poem in conversation with your art?
Artist Gabe Travis: This piece was one in a series I did trying to evoke a sense of mythical or allegorical memory. I used the “trickster” raven as the central figure, since when he is present things aren’t always as they appear. And I tried, through layering the images, to create a sense of compressed narrative, as we have in memories, where some details are visible, nameable, while others are vague. That said, I didn’t have a specific narrative in mind, more of an after-image. So, I was surprised and delighted by the specificity of this poem. The poem takes the darkness and the menace, and makes it personal. It is your wife, your mistake, your wound. Which makes the piece very intense.

This poem was chosen in response to Gabriel Travis’s art—can you talk about the experience of finding words that were in conversation with the image? What leapt out first from Gabe’s art? A particular image? A mood? A line?
Poet Laura Lee Washburn: Ravens have a lot of mystique as trickster and as magic. I like to imagine them with nests full of wedding rings and silver fishing lure spinners. Ravens can talk human talk. Right away I was drawn to the bird and then to the business of the canvas, the lines, and the movement. I liked the things in the picture that didn’t make sense to me. I felt like I wanted to see a bigger and bigger version to figure out what I was seeing. Is that an ice cube? A trash-compacted white tiger, wolf, machine, element, dream? Should I take my glasses off or put them back on? Every time I look in that right lower corner I see something different. Also, I saw a subtle pain or suffering in “Raven 2.”

What did you expect a writer to pick up on from “Raven 2”?
Artist Gabe Travis: I guessed the birds on the branch, maybe the ice cube.

Paired with the art, do you think the poem does something different or has a different tone?
Poet Laura Lee Washburn: I think my poem is much meaner and sadder than “Raven 2” is by itself. And my poem is probably less complex than the art.

Paired with the poem, do you think the art does something different or has a different tone?
Artist Gabe Travis: Yes. I think it feels much darker. I like it.

Have you ever had a writer respond to your work before? What was the experience like?
Artist Gabe Travis: No, I have been on the flip-side, as the artist responding to poems but this feels very different!

Have you ever written work that has been inspired by visual art? What was that experience like for you? Why were you inspired to do so?
Poet Laura Lee Washburn: I’ve been writing poems inspired by visual art for over twenty years. A friend once gave me Diane Arbus’s Aperture Monograph and said, “These photos remind me of your work.” I was writing narrative at the time, lots of characters always, and usually a bit of the Southern grotesque, but I was still a little stunned by the comparison. Suddenly I found myself writing poems with Arbus’s titles “The Albino Sword Swallower at a Carnival in Maryland” and “A Jewish Giant at Home with His Parents.” I turn to art often to spur ideas. I always want my poems to be able to stand alone, but they’re enhanced when paired with the art that triggers them. I can’t say that the poems reciprocate for the art.

If your art were an animal, what would it be?
Artist Gabe Travis: Raven—the shape-shifter, trickster, story keeper.

If your poem were an animal, what would it be?
Poet Laura Lee Washburn: A vole, something you see peeping and sneaking in the brown back yard, something that makes you question: “Did I just see what I think I saw?”

If the broadside collaboration were an animal, what would it be?
Artist Gabe Travis: A tiger wearing a raven disguise.
Poet Laura Lee Washburn: Something mythological, something winged, a sphinx, a winged centaur.

Seen any good art lately?
Artist Gabe Travis: Yes! I just saw a haunting contemporary quilt underway in an artist friend’s studio that has really stuck with me.
Poet Laura Lee Washburn: Quite a lot. I was really taken with Rem Koolhaas’s student center on the IIT campus in Chicago, Yuya Ushida’s collapsible chair made from 8,000 chopsticks is kind of a hoot, and I was impressed with Marianne Evans-Lombe’s For South Dakota series which seemed to me to show the violence inherent in restrictive abortion laws.

Anything else?
Poet Laura Lee Washburn: That little bit of red on the raven’s wing, those words I can’t read, diagrams, the lines of communication inherent in the telephone pole, the color blue, resting after flight, the Snow Queen, mercury on a shiny oak table.

If we had but world enough and time, we might do a switcheroo every other month: one month have writers respond to art, the next have artists respond to poems. The dynamic, the back-and-forth, the surprising reverberations that are created as words and image bounce against each other are exciting, inspiring, and always startling.

Both Gabe’s and Kara’s images inspired a wealth of good writing and, we are happy to say, entries were fairly evenly divided between the two artists. Both inspired. And inspired widely.

Kara Searcy’s apocalyptic image with its Biblical title took writers toward war, toward intimacy, toward airlines and armies and desire, desire, desire. Even toward the oddity of the octopus. In the end, Catherine R. Cryan’s poem of pleading and dream, of toxins and nostalgia, her slim plea, seemed to speak for and with the image.

The lines in Gabriel Travis’s image inspired many writers, as did the voice of the raven itself/himself. Raven as trickster, raven as corvid, raven as epitome of the soul, raven as observer of our messed-up world, raven as hold-out in our increasingly technological world—all had their voice. 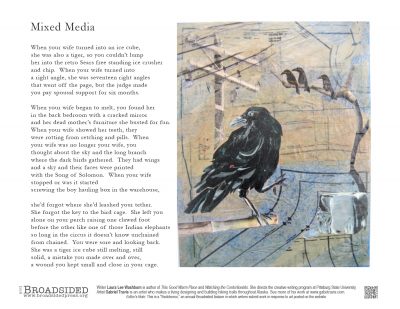 Note: “Mixed Media” is the tenth Switcheroo feature from Broadsided Press. Another collaboration, “Matthew 7,” was also released. What is The Switcheroo?  Every year, during National Poetry Month, we like to turn the tables and invite writers to respond to art we post, then publish the best collaborations.

All Broadsided artists were invited to submit up to three pieces of work for the Switcheroo. We then asked Cheryl Gross, Broadsided artist and the April, 2012 Switcheroo artist, to review the submissions, choosing one that he thought would be open to literary response and would work in the Broadsided format. She selected pieces by Kara Searcy and Gabriel Travis.

Of her decision, Gross had this to say:

I feel that the pieces are contemporary and not afraid to express emotion. So much of art that is coupled with writing, poetry, etc., is some what safe. These two pieces are very different and “deep” for lack of a better word. They are illustrations rather than fine art pieces that were coupled with text, that seem to go well together. They are telling a story and assisting an already existing idea, rather than randomly put together. They are not cute, they are disturbingly beautiful and straight to the point, (cut to the chase so to speak.) They evoke emotion and are not afraid to convey a point of view, thus giving the viewer a deeper experience. After being led in this direction, the viewer then has the choice of continuing to read the poem, or not. This makes for some very powerful art.
– Cheryl Gross

Artist Gabe Travis is an artist who makes a living designing and building hiking trails throughout Alaska. He has been making art on commission for about eight years and producing fine art notecards featuring these works (available at www.gabetravis.com).

Poet Laura Lee Washburn is the Director of Creative Writing at Pittsburg State University in Kansas, an editorial board member of the Woodley Memorial Press, and the author of This Good Warm Place: 10th Anniversary Expanded Edition (March Street) and Watching the Contortionists (Palanquin Chapbook Prize). Her poetry has appeared in such journals as Carolina Quarterly, November 3rd Club, The Sun, The Journal, and Valparaiso Review. Born in Virginia Beach, Virginia, she has also lived and worked in Arizona and in Missouri. She is married to the writer Roland Sodowsky.