What made you think of Broadsided for this poem?
Poet M. A. Vizsolyi: This is a poem about movement, and a broadside exists as a waypoint in spaces where people move often. I imagine the poem existing in a liminal space, perhaps being read by someone on their way to somewhere else. Because the poem is about journeys and all the complications of simply moving, I would hope that a reader might stop for a minute and read the poem. Maybe the poem causes the potential reader to consider their walk more closely, to examine the face of their own particular evening.

What inspires you in this poem? What drew you to it?
Artist M. J. Levy Dickson: The title inspired me to read the poem and then as I read and found visual triggers, I began.  I was going to create a more complex image, but the more I added, the more distraction I created. Then I looked for the essence of the poem. I went to the center: the moon, which is always with us, a basic form of nature, echoed in a ball for play or a wheel for transportation. Then the last line after reflecting on a journey on foot and in the mind, “an almost human face.” The meaning of “overhead” to someone with limited vision isn’t an easy concept. If you are inside, overhead might relate to the ceiling which can be touched. Outside, it is the sky, which cannot be touched. For a small child, the sky begins lower than for a tall person. Life is relative to your experience. I felt the rhythm of the walk and thoughts; a bird with a human looking eye in the wing, the sclera exposed,  reflecting “an almost human face,” then gone in a moment.

Describe your dream “Vectorization”—where, in your wildest dreams, would you most like to see this broadside posted in the world?
Poet M. A. Vizsolyi: For this particular broadside, I imagine it living out its days outside a funnel cake stand in Asbury Park, NJ.  I suppose that’s where I spent a lot of time walking in my youth.  Perhaps it lives there for a while, then breaks free, letting the wind carry it off into the ocean. That would be nice.

What did you think an artist would pick up on from your poem? Did the visual artist refract any element of the poem that made you see the poem differently?
Poet M. A. Vizsolyi: Outside of the narrative of the poem being portrayed, I really wasn’t sure what would come about.  What I love about what M. J. did here is the spareness of the scene, which, oddly enough, reflects the movement of the entire manuscript. So there’s a particularly insightful interpretation in this case. It also gives space to the poem, which is rather nice.

In seeing the other artist’s visual response, what occurs to you?
Artist M. J. Levy Dickson: The world is in the eyes of the beholder.

In thinking about the two visual responses, how does the poem change between them?
Poet M. A. Vizsolyi: As an editor for a number of years who often includes visual art alongside of text, I’ve been aware of art’s ability to influence the tone of a piece in a number of ways. It wasn’t until I saw it so clearly with my own poem that I really felt just how much a particular piece of visual art can influence the piece from the start. It’s akin to the way a piece of background music can influence the way we interpret a scene in a movie. The poem felt completely different in each version—darker in one and more hopeful in the other.

Have you ever written work that has been inspired by visual art (other than Diego Rivera’s!)? What was that experience like for you? Why were you inspired to do so?
Poet M. A. Vizsolyi: Yes. In fact, I’m currently writing a series of poems that responds to the artist Arshile Gorky. I’m particularly interested in the self-portraits of the artist and his mother. Looking at that painting, I could see the rich cultural and emotional history they contained as people. I could also see myself there, and my own mother. I think that’s what happens with visual art for writers and maybe for any viewer. We see ourselves in a piece, feel we own a particular kind of experience with the piece, and try to express that experience in words. I grew up with a single mom who was the child of immigrants, so I felt, when viewing Gorky’s piece, that his “voice” sounded like my own.

If this broadside were a type of weather, what would it be?
Poet  M. A. Vizsolyi: Oh, this broadside would certainly be a warm morning, maybe the kind of morning that allows you to still see a sliver of the moon before the sun takes over.
Artist M. J. Levy Dickson: Any condition that allows for the view of the moon.

Read any good books lately?
Poet  M. A. Vizsolyi: Laurie Foos’ Toast, which is a YA novel that centers on a child who is on the spectrum. I always appreciate books that increase my capacity for empathy in certain ways. I just finished Ted Chiang’s Exhalation, a collection of science fiction stories. He continually challenges my idea of science fiction and what it can accomplish. Ah, and Paul Yoon’s The Mountain was gorgeous. The prose is exquisite and quiet and spare—as are the characters in the stories.
Artist M. J. Levy Dickson: The War That Saved My Life, by Kimberly Brubaker Bradley; The War I Finally Won, by Kimberly Brubaker Bradley; Moby Dick, by Herman Melville; Furious Hours, by Casey Cep; Out of the Wild Night, by Blue Balliett.

Seen any good art lately?
Poet  M. A. Vizsolyi: I currently teach at Goddard College, where I often have the chance to see the work that students in the undergraduate art program produce during their time. There’s a kind of pure energy in the work of the students, an energy that’s wholly engaged with art as more than beauty—rather art that serves to directly critique art-making in a turbulent society. I encourage people to check out Goddard’s art programs.
Artist M. J. Levy Dickson: Amrita Sher-Gil, Vivan Sundaram, Rosy Keyser, and Roni Horn.

Anything else? (Here, we invite the collaborators to invent a question, add a comment, or otherwise speak to what the questions so far have not tapped about their Broadsided experience).
Poet  M. A. Vizsolyi: I just want to say how humbled I am by the artists’ responses to my work, and I want to thank them for their thoughtful response. I really am floored by the experience.
Artist M. J. Levy Dickson: The art of poetry inspires a visual response on many levels. Combining a word with a thought and a feeling inspires an artist to do the same and re-interpret and express an image from a different point of view, to take the familiar and make it more or to give a new beginning. 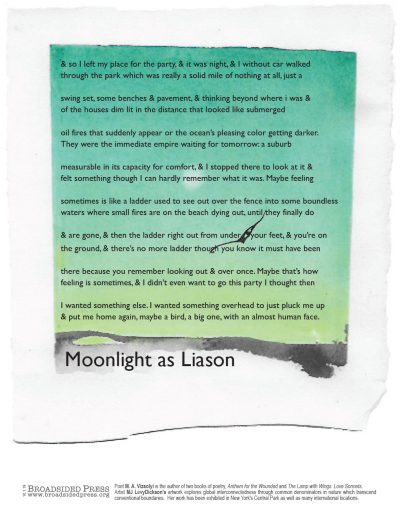 Poet M. A. Vizsolyi is the author of two books of poetry, Anthem for the Wounded and The Lamp with Wings: Love Sonnets, winner of the National Poetry Series, selected by Ilya Kaminsky. He is also the author of the chapbooks, Notes on Melancholia (Monk Books) and The Case of Jane: a verse play (500places press), which was produced for Performa 13 and broadcast on NPR. He teaches Creative Writing at Goddard College and is faculty advisor for the college’s national literary journal, DUENDE.

Artist M. J. Levy Dickson has taught at MIT, the Boston Architectural Center, and Wenzhou-Kean University in China. Working with people with limited vision, mental health issues, children, older adults, individuals on the autism spectrum, and others with special needs has honed her instinct for art as communication. She provides a counterpoint to a culture in which emotions are intellectualized and verbalized—yet not available to everyone in these forms. Encompassing thought and meaning visually, tactilely, and aurally, she offers a bridge by which diverse audiences can experience the unexpressed.