What surprises you about Mara’s poem in conversation with your art? Did the poet refract any element of the art that made you see the piece differently?
Artist David Bernardy: Mara’s poem reveals a sense of the scientific that really delighted me—to go from the doubled image to the “bilateral human,” and from there, to cell division and the connections that exist between us humans, jellyfish, and poppies…lovely, lovely stuff. With her poem in mind, the frame around the photo-booth image feels like a microscope slide, and the stack of old rulers along the bottom edge starts to operate as actual measuring devices rather than just visual borders.

This poem was chosen in response to David Bernardy’s artwork, “Measure of Grace”—can you talk about the experience of finding words that were in conversation with the image? What leapt out first from the art? A particular image? A mood? A line?
Poet Mara Jebsen: The thing that leapt out was the symmetry; that there are two of the woman. She was doubled: was she split? Why did she face away from herself?—or, of course, both selves were herself. But were the floating tendrils jellyfish or poppies? In any case, there were two sets of them, too. So, I thought more about splits, branching, and family trees.

Paired with the art, do you think the poem does something different or has a different tone?
Poet Mara Jebsen: The poem is a praise-poem and sort of just lifts its hands and says, “yes.” I think her expression, and the immaculate placement of things, do something very different. The latter makes it feel like things can be sorted out, understood. Her face suggests (to me) that this takes great, great courage.

Paired with the poem, do you think the art does something different or has a different tone?
Artist David Bernardy: I think Mara’s poem emphasizes praise, that generous act of loving attention, in a way that the collage only gestures at. So, in a sense, I think the poem opens the piece up, and makes it speak to a larger human concern instead of focusing on just the individual figure in the picture.

What surprised you about this collaborative piece?
Poet Mara Jebsen: How the image felt so familiar, and how quickly the poem arrived.

Have you ever had a writer respond to your work before? What was the experience like?
Artist David Bernardy: I have tried writing in response to my own images, but this is the first time someone else has done it. I have to say, I loved the results. There is an odd thing that happens as visual image becomes figurative language. For example, I chose the poppies along the bottom because I liked the way their shapes echoed the folds in the lady’s hat. And I used the stack of rulers because: a) I like old stuff and b) I thought their colors would play off well against the blue. So, it is really wonderful to see these visual choices becoming grist for metaphor.

Have you ever written work that has been inspired by visual art? What was that experience like for you? Why were you inspired to do so?
Poet Mara Jebsen: I often work off of visual art, but not with the hope that the poem would get to live next to the art. That really upped the stakes somehow, and made me focus.

How does literature fit into your creative life as a visual artist?
Artist David Bernardy: These days I’d say I am more of an artist who writes sometimes, but for a long time, I was a writer who painted sometimes. The two impulses, making art and making words, both come from a similar desire to create or suggest stories. Sometimes, I go back and forth with the same material, drawing out what I have written or writing about what I’ve drawn.

If the Broadsided collaboration were a piece of music, what would it be?
Poet Mara Jebsen: Ooh, this one is so hard. I don’t know…something with a regular rhythm, but not boring.
Artist David Bernardy: I’ve always thought this piece should have jazz in the background, like the opening track of Miles Davis’s “Kind of Blue,” but it should sound as if it were coming from down the hall or being played underwater.

Read any good books lately?
Poet Mara Jebsen: Priestdaddy by Patricia Lockwood.
Artist David Bernardy: The past few months I was re-reading some stuff. Read again A Visit from the Goon Squad by Jennifer Egan, and still liked it a lot. And read Hilary Mantel’s Wolf Hall for the third time. I can fall into that book forever. Also read Jennifer Willoughby’s poems from her book Beautiful Zero. Check her out.

Anything else? (Here, we invite the collaborators to invent a question, add a comment, or otherwise speak to what the questions so far have not tapped about their Broadsided experience).
Poet Mara Jebsen: I should note that I was reading a book called Other Minds by Peter Godfrey-Smith just before I saw the Broadsided call. It is about the octopus and the origins of consciousness—and it just made me think about a family tree that goes all the way back to the very first nervous systems, possibly 700 million years ago. So I had an idea in mind when I looked at the art, and probably somewhat superimposed it.
Artist David Bernardy: I just want to thank Mara for all the kind attention she paid to my art and for making such a lovely piece in response to it. And also a big thank you to all the Broadsided for all the good work they do. Ya’ll are the best.

Each spring, we offer writers a chance to respond to a piece of visual art. (The rest of the year, artists respond to writing that the editors have selected.) We call it THE SWITCHEROO. Writers had until April 15 to mull, muse, draft, and play in response to David Bernardy’s mixed-media image, “Measure of Grace,” and send us your work. And what work!

We were so impressed with the range of engagements this powerful piece prompted. There was a deep upwelling of poems and prose in response to “Measure of Grace” — poems about prayer, poppies, jellyfish, precision, doubleness, hats. Through writers’ imaginations, the inner life of the woman pictured was given thought, emotion, sass, yearning, and story.

It was inspiring and exciting to consider all the entries. In the end, we took a handful to our final editorial meeting, read each aloud, talked about surprise and sound and resonance. Our decision was not easy. However, the poem “Ode to Origins” by Mara Jebsen thrummed for all of us. We kept returning to the sure sound of its opening, the careful hesitations of its syntax, and the way it made us reconsider Bernardy’s art in new lights. There was humor there, and intelligence, in the poem’s “measure[ing], with love, / the dimensions of fracture.” We hope you feel the same.

Our thanks to all who sent in work, and we hope you enjoyed the opportunity to find inspiration in an image from one of our artists. We are grateful to all who participated. 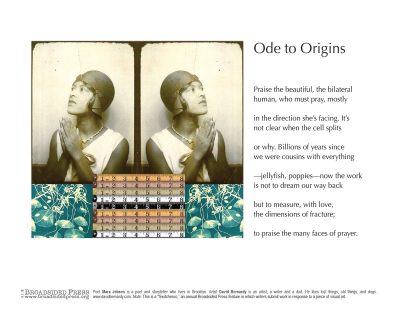 Note: This broadside is the result of the 15th Broadsided Press Switcheroo. What is The Switcheroo? Every year, during National Poetry Month, we like to turn the tables and invite writers to respond to art we post.

All Broadsided artists are invited to submit up to three pieces of work for the Switcheroo. We then asked Amy Meissner, the 2017 Switcheroo artist, to review the submissions and choose one she thought would be open to literary response and would work in the Broadsided format. Of her decision, Meissner had this to say:

As an artist who works with household cloth created by unknown makers, I’m consistently drawn to the narrative quality of anonymous photographs of women. I can see why the artist chose to manipulate the photograph in this assemblage — the defiant expression juxtaposed with hands held in prayer, lends one to believe the subject’s mind is elsewhere. The work feels like a stepping-off point for so many narrative opportunities. —Amy Meissner

Mara Jebsen is a poet, performer, and essayist. She has taught undergraduate writing at New York University for fifteen years and is a New York Foundations for the Arts fellow in poetry. Mara was raised by folklorists in Philadelphia and in Lome, Togo.