What made you think of Broadsided for this poem?
Poet Corrie Williamson: I have been loving on Broadsided’s work and the concept behind it for some time. I wanted to send something compact, but with a strong visual core, and this poem fit the bill.

What inspires you in this poem? What drew you to it?
Artist Millian Pham Lien Giang: The subject is very relevant to the push and pull of our current social structures, where many are still standing up for their humanity and others have yet to grasp the harm of their beliefs. I’m drawn to the idea that what seems like a deliberate choice may in fact be the only choice, which is not a choice at all but an obligation through a structure that limits and oppresses.

What did you think an artist would pick up on from your poem?
Poet Corrie Williamson: Well, the moon! The moon is really the central image in the poem, which is otherwise largely focused on the thought process of a young speaker considering her freshly gained understanding of the concept of gravity. The speaker, like the moon, is yoked to the will of forces larger than herself, and so I thought that might come through, as well. And actually both are here: the colors are evocative of a moonlit night, and I think the shapes express order and containment.

When you began this piece, was it color, shape, or some other aspect that you followed? Did that change?
Artist Millian Pham Lien Giang: It began with the color of a full moon in the night sky. I also wanted to anchor the half floating figures with the regularity of a grid. Some shapes are clearly defined while others are diffused. I’m interested in showing that push/pull relationship through several layers of contrast in formal and compositional choices.

Did the visual artist refract any element of the poem that made you see the poem differently?
Poet Corrie Williamson: I find the image very angular and scientific, like an equation, which echoes the poem’s title but is an interesting contrast to the poem’s moody moon images, which to me suggest roundness and femininity. I like that the image brings out the rigidity of rule and measure, and reinforces the poem’s suggestion that the speaker is trapped or enclosed by laws or standards she cannot alter.

What surprised or struck you once you saw the finished broadside?
Poet Corrie Williamson: I like how the shapes force me to try to read them, though they aren’t true letters, and unreadable in that sense — a kind of visual trick that I think echoes some of the speaker’s confusion and frustration in a really interesting way. And when I read the artist’s title for her piece “Bound Force,” I recognized that the shapes do in fact suggest those words, without literally spelling them out. There’s a lot of magic there.
Artist Millian Pham Lien Giang: I’m surprised by how the poem and the artwork collaborate in formal and symbolic structures.

Have you ever written work that has been inspired by visual art? What was that experience like for you? Why were you inspired to do so?
Poet Corrie Williamson: Definitely. I think my poems are often hungry for the ways visual art can strike so quickly and cleanly. There are a couple such poems in my first book, Sweet Husk, including one about a George Catlin painting of a buffalo hunt that I kept returning to in a museum and couldn’t get out of my brain. In my forthcoming book, The River Where You Forgot My Name, there’s actually a “double ekphrastic” that riffs on two Charles Wilson Peale paintings, both involving mammoths.

How does literature fit into your creative life as a visual artist?
Artist Millian Pham Lien Giang: Many of my visual works deal with language and how language shapes perception. Literature is such a rich field, with symbols and abstract representation that challenge me as a visual artist. I’m continually seeking out specific language that infers ambiguity and creates new meaning through changes in context.

If this broadside were a piece of music, what would it be?
Poet Corrie Williamson: Oh, some mournful and creaky fiddle tune with crickets in the background.
Artist Millian Pham Lien Giang: A Phillip Glass composition.

Read any good books lately?
Poet Corrie Williamson: I can’t stop re-reading Ursula LeGuin since she died. Gosh, I love her. I also just finished Kai Carlson-Wee’s Rail, and Michael Pollan’s latest book, about psychedelics, and enjoyed both quite a bit.
Artist Millian Pham Lien Giang: I’m currently poring over Where Good Ideas Come From by Steven Johnson and Air Guitar by Dave Hickey. To generate great content in my work, it’s imperative to understand the context in which good ideas exist. Johnson’s book is a great primer to the structures that foster and cultivate ideas. Dave Hickey is just an inspiring writer who writes about his cultural experience as a creative and curator. We all need a little inspiration to keep us going in this messy world. Hickey makes me appreciate the messes.

Seen any good art lately?
Poet Corrie Williamson: I live in a small Montana town, and I love visiting one of our local galleries, 1 +1 =1, for its ever-changing quirky, earthy, locally-minded exhibits.
Artist Millian Pham Lien Giang The works by Otobong Nkanga at the MCA in Chicago are rich with cultural and geopolitical references to economic forces and structural issues. I enjoy the depth and variety of art materials and mediums.

Anything else? (Here, we invite the collaborators to invent a question, add a comment, or otherwise speak to what the questions so far have not tapped about their Broadsided experience).
Artist Millian Pham Lien Giang: After searching for the relevance of this detail, I’m still unsure about the subtitle “Fincastle, Virginia 1805.” I’m guessing it ties into Corrie’s current manuscript and that the poem has a role in it. I’m looking forward to when she completes this body of work. 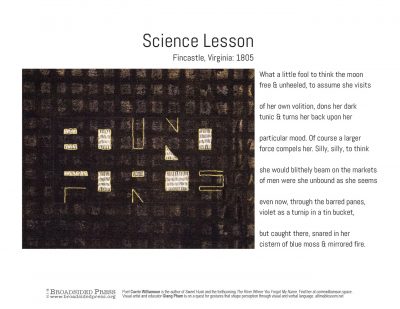 Poet Corrie Williamson is the author of Sweet Husk, winner of the 2014 Perugia Press Prize, and The River Where You Forgot My Name, selected for the Crab Orchard Series in Poetry and forthcoming in 2019. Her poems have appeared in the Missouri Review, West Branch, AGNI, Shenandoah, Verse Daily, and elsewhere. She lives in Helena, Montana. Find her at corriewilliamson.space.

Millian Pham Lien Giang is a visual artist and educator. When she’s not preaching and teaching the finer points of fine art, Pham focuses on many modes of visual art perception in her practice. Overlapping themes of gender, class, and culture are captured through images, objects, and events in her work. altimablossom.net
Image: “Bound Force,” 2018, Acrylic paint and hand embroidery,
11″ x 14″