What made you think of Broadsided for this poem?
Poet George Franklin: There’s a period of time, sometimes a few minutes, sometimes months, after you write a poem where you get to know it in different ways. One of the things I noticed initially was how visual the poem was. Maybe adolescence is a particularly visual time, or maybe memory works that way.  Regardless, it wasn’t hard to imagine the poem as a broadside.

What inspires you in this poem? What drew you to it?
Artist David Bernardy: The first thing that really caught my attention was the image of the fence line and the way George has populated his landscape with clear visuals—the circles, the fence, the fast food, and Chinese restaurant signs. I grew up in a rapidly developing suburb and saw it go from the edge of farm land to a plastic sprawl over the course of my high school and college years. Though I didn’t like that aspect of living at the time, the visual clutter it made came back to me as I read George’s work. I think that clutter and the resentment it brought back connected me to the young, frustrated speaker of the poem.

Describe your dream “Vectorization”—where, in your wildest dreams, would you most like to see this broadside posted in the world?
Poet George Franklin: C.E. Byrd High School in Shreveport, Louisiana—though it probably wouldn’t go over too well.
Artist David Bernardy: I am fascinated by the sort of synchronized flip-card messages you see sometimes in stadiums and other large venues, where each person holds a big poster-card with a portion of the image or message printed on it. And all on cue, the people flip their card over, revealing their part of the image. Seen from above, these bits and parts work like pixels, combining to create the full image.

There may well be a word for this, but I don’t know it.

Anyway, something like that would be amazing. Something that could be seen from space.

What did you think an artist would pick up on from your poem? Did the visual artist refract any element of the poem that made you see the poem differently?
Poet George Franklin: I’m a terrible artist. Maybe that had to do with not being a great geometry student—not sure. But I love how good artists see the world differently from how I see it. I assumed an artist would focus on the obvious—the fences, the television, Vietnam—but David got at something much deeper in the poem: the longing, the sense of wanting so badly to be elsewhere, what was on the other side of the window. The palette that he used surprised me. The colors—red, yellow, brown, and blue—somehow feel very French to me, how I imagine Provence. Somehow they connote an adolescent longing I confess I still experience. So, yes, I see the poem differently because of David’s interpretation.  Whereas before I saw it as a poem of confinement and limitation, now I see it as the actualization of that desire to be somewhere else—getting past the fences.

Have you ever written work that has been inspired by visual art? What was that experience like for you? Why were you inspired to do so?
Poet George Franklin: I love to write ekphrastic poetry. It gives me a chance to experience a painting differently, not just as a passive observer but as someone having a conversation with the painting. It’s usually an accident, though, when I write that kind of poem. I’ll be looking at reproductions of, say, Caravaggio, and it just happens.

If this broadside were a type of weather, what would it be?
Poet George Franklin: A spring day, partly cloudy—you can imagine what summer will be like in a couple of months.
Artist David Bernardy: That combination of stillness and twitchiness that comes just before a storm.

Read any good books lately?
Poet George Franklin: Yes! Just read The Good Mother of Marseille by Christopher X. Shade. It’s a novel that follows several people, mostly Americans, as they find themselves for different reasons in Marseille. The city is itself a character in the book, a disturbing one too, filled with violence and poverty, but also a kind of uncanny stage where lives are enacted. Most of the characters keep looking for ways to avoid the reality of the place, but they aren’t able to do that. It’s a book where it’s very easy for me to imagine myself as a character, all my wanting to be somewhere else turned inside out by the reality of Marseille.
Artist David Bernardy: Right now, I am reading and loving Daisy Johnson’s dreamy, gorgeous, spooky novel Everything Under. And I just got back from a trip to Italy, so I am still milking that experience by reading Jan Morris’s lovely book, Venice.

Seen any good art lately?
Poet George Franklin: I recently framed and put up three photos by the Cuban photographer/poet Ena Columbié. I love the way her photographs speak with her subjects. I also had an occasion to rehang some wonderful paintings by the Boston abstract painter Thomas Barron. Rehanging them made me see them all over again.
Artist David Bernardy: I have been looking back at an artist I sort of found long ago, a painter named Milt Kobayashi. I love the messiness and the delicacy, the way he does portraits and patterns, the way you can still tell it is paint. All of it. Also, I was recently able to sit down in front of The Raft of the Medusa, a huge painting (16’ x 23.5 ‘) by Théodore Géricault. This painting was done in 1819 as a sort of comment on a shipwreck and some of the politics surrounding the ship itself. Maybe it was the sheer size, but the thing is just overwhelming and totally engrossing. If you ever get a chance to see it in person, do so.

Anything else? (Here, we invite the collaborators to invent a question, add a comment, or otherwise speak to what the questions so far have not tapped about their Broadsided experience).
Poet George Franklin: I just want to say how grateful I am to David Bernardy and Broadsided Press.  I think very few poets are used to being read closely. Probably for a lot of reasons, we may even prefer not to think about it. In order to create his part of this broadside, David had to read my poem with great attention and great generosity. Thank you, David, and thank you, Broadsided.
Artist David Bernardy: Thanks to all the Broadsided folks for all the work they do to put this subversive thing together. And thanks to George for his words. 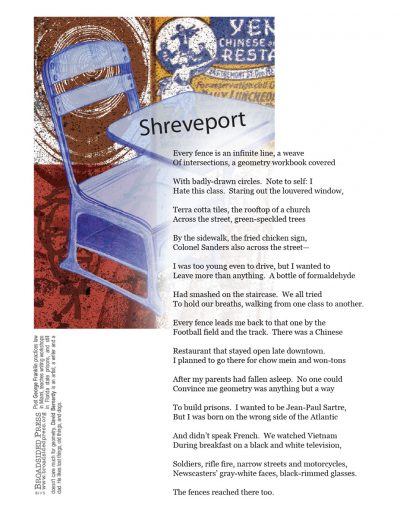 Poet George Franklin’s collection, Traveling for No Good Reason, won the Sheila-Na-Gig Editions competition and was published in 2018. A bilingual collection, Among the Ruins / Entre las ruinas, translated by Ximena Gomez, was also published in 2018 by Katakana Editores. Individual poems have appeared in various journals, including Into the Void, The Threepenny Review, Salamander, Pedestal Magazine, and Cagibi. George practices law in Miami and teaches poetry workshops in Florida state prisons.