Why did this piece of art resonate for you or seem like it would give you an avenue into writing about Japan’s earthquake and tsunami?
Poet Lisa Moore: My poem started from a couple of awkwardly-translated sentences on a news report. A woman whose husband had just been found in the rubble was asked for a reaction and I was struck by the difference between watching her speak (in Japanese) and the rather bloodless subtitles: “I am relieved to see him, of course. But there are so many others still missing.” Those words sounded so measured but the woman looked so distraught and desperate….not “relieved” at all. Those words and their inadequacy and what might be behind them rattled around in my brain for a few weeks and were called back to mind when I saw Ira Joel Haber’s piece “Sliding House.” The plainness and somber colors of the image combined with the terrifying movement of the house out of the frame seemed to capture that dissonance.

Why did this visual response come to mind when thinking about Japan’s earthquake and tsunami?
Artist Ira Joel Haber: I did this drawing in a notebook when I was living in San Diego teaching Art at UCSD. I lived in a very small apartment which was on a high hill. and had a patio overlooking the valley below. This drawing is of course about hanging, literally and figuratively. Some of my work, especially the work from 1969 to 1975 have a strong dose of catastrophe and destruction so this latest environmental disaster hit home.

What do you think is the role of art in regards to real-world, real-time events? In other words, what makes a “successful” occasional or political piece of writing or art?
Poet Lisa L. Moore: I read a lot of eighteenth-century “occasional” verse composed for particular people or events, and the poems that last are the ones that speak with enough specificity to conjure the feeling of that moment in a way that grabs the reader even across centuries. Like Pope’s “Epistle to Bolingbroke.” Who cares about Bolingbroke? But the line “Hope springs eternal in the human breast” breaks my heart.
Ira Joel Haber: I can recall one work that I did in direct result of real world events and that was the Viet Nam war. The role of art with regards to the above is the same as any person’s reaction should be. 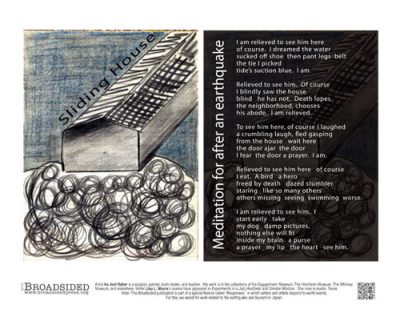 Artist Ira Joel Haber was born and lives in Brooklyn New York. He is a sculptor, painter, book dealer and teacher who sometimes writes poetry and movie reviews. His work has been seen in numerous group shows both in USA and Europe and he has had 9 one-man shows including several retrospectives of his sculpture. His work is in the collections of New York University, The Guggenheim Museum, The Whitney Museum, The Hirshorn Museum & The Albright-Knox Art Gallery. In 2004 he received The Adolph Gottlieb Foundation grant. Currently he teaches art at the United Federation of Teachers Retiree Program in Brooklyn. (View Ira’s Work)

Writer Lisa L. Moore grew up hiking, skiing, trail riding and working on her family’s ranch in the eastern foothills of the Canadian Rockies. After working as an arts journalist, Lisa went into academia and since 1991 has been teaching English and Women’s and Gender Studies at The University of Texas at Austin. She is the author or editor of several books, including Experiments in a Jazz Aesthetic: Art, Activism, Academia and the Austin Project(Texas) and most recently Sister Arts: The Erotics of Lesbian Landscapes (MInnesota). She is the co-director, with Meta DuEwa Jones, of the Texas Institute of Literary and Textual Studies, which is offering a series of lectures, workshops, readings and symposia in 2011-12 on the topic of Poets&Scholars (more information here). Her poems have appeared in journals and anthologies including Sinister Wisdom, and she blogs at Sister Arts: Gardens, Poems, Art, Community.

Filed under: Earthquake and Tsunami in Japan, 2011