What did you think an artist would pick up on from your poem?
Poet Dawn McGuire: In Wu Wei—doing by “not doing”—I imagined a visual artist might be led to abstract images, introverted ones. Also, in terms of a representational piece, I could imagine a simple stone structure at some precarious “angle of repose.” The poem asks questions about wanting to relinquish a worldly agenda—to be enlightened of it—yet the (?) necessary relationship we have to passion and suffering. So, an angle of repose—with the sense of an imminent avalanche somewhere…

What inspires you in this poem?
Artist Gabriel Travis: I love the tension between the intuitive-mystical and the scientific-analytical. The poem questions the assumed goal of “desireless-ness” that is fundamental to many spiritual traditions. And seems to say it might be the very essence of humanity to desire. And without that essence, we may lose the very truth we were trying to find in the first place. The poet opens to this insight through a biological “backdoor” that feels rigorous and effortless at once—a kind of casual, deep musing—that feels very deft to me. I love the music of the language, and the imagery, and the subject feels vital. I love this poem!

Did the visual artist refract any element of the poem that made you see the poem differently?
Poet Dawn McGuire: What a wonderful question! I’m in awe of Gabriel’s work in this piece. The collage-like effect, with visual quotes from Asia—the pagoda,—and the raptor’s wing (that the frame can’t even hold); the image of toxicity—a gas attack, or bad air, or not enough air—? and then, under all this, some deep, autonomous process is suggested to me. I see the energy of creation. At the foundation: mitochondria? A mask? Magic? Most of all, I see our connectedness as creatures and creators who endure, not as individuals, but ultimately as recyclable life parts.

When you began this piece, was it color, shape, or some other aspect that you followed? Did that change?
Artist Gabriel Travis: I spent some time trying to get a sense of the real heart of the poem. And the tension I talked about in the first question seemed to be that for me. So, I tried to translate that into a visual language. I started with imagery that would communicate both sides of the tension. I wanted to get at the different ways of reaching a desireless state—the medical, chemical draining, and the spiritual effort—and the animal nature that resists both.

What surprised you about this collaborative piece?
Poet Dawn McGuire: The formality surprised me—the frame constructed like the poems tercet form, for example. I love how Gabriel seems to set up rules and then break them—as the raptor’s wing defies the frame (and the cry defies the containment of the poem’s construct).
Artist Gabriel Travis: I noticed words at the line breaks in a different way—”Afraid poems abscessed inflamed name midbrain bilayers altitude eating thinking want truth small suffering cry”.

How does translation play a part in your creative life?
Poet Dawn McGuire:I do translate, when I can, from several of the Tang Dynasty poets. One was a beloved Buddhist artist; another was a political activist; a third was influenced by Taoism. These translations take “forever,” and require being wholly present, consumed. Yet, unlike much of other types of writing I do, which can be so lonely, I feel in the company of friends when I translate. I feel that we are talking to each other across more than 1200 years. It’s where I most get to experience a state where there is no space, no time.

Have you ever written work that has been inspired by visual art? What was that experience like for you? Why were you inspired to do so?
Poet Dawn McGuire: I wrote a sestina in my second book based on a renaissance portrait by Ghirlandaio. The sestina was, loosely, about our modern terror of aging. The man is old and deformed—but a young boy looks up at him with total love, and the coarse old man looks down at the boy with equal tenderness. They’re both perfect. Age and appearance are not what’s real here.

And, then, on a lighter note, I recently started a poem with Jeff Koons’ three-story dog made of flowers.

If you had to represent the Broadsided of “Wu Wei” with one word, what would it be?
Poet Dawn McGuire: No Wei
Artist Gabriel Travis: The poem’s title is already perfect for this: “Wu Wei.” Meaning “Without doing, detached from outcomes or agenda.” I guess that is technically two words, huh?

If “Wu Wei” were a piece of music, what would it be?
Artist Gabriel Travis: I would definitely put the Beastie Boys’ “Shambala,” from Ill Communication, on the “Wu Wei” soundtrack.

Anything else?
Poet Dawn McGuire: I’m just endlessly curious, aren’t you?
Artist Gabriel Travis: Broadsided collaborations are such highlights for me. It’s really fun to have an “assignment.” And to be forced to really digest a poem slowly over time, and keep coming back to it. And then to get to a point of absorption where I can begin to translate the poem into my own visual vernacular. 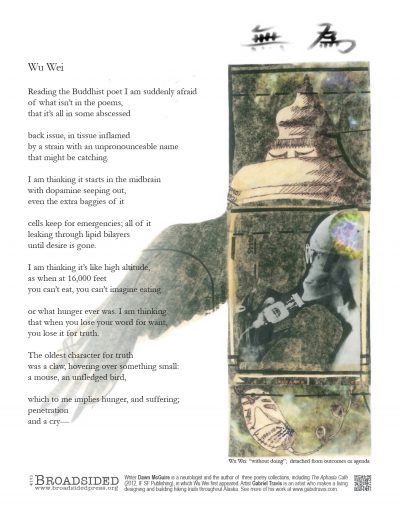 Poet Dawn McGuire is a neurologist and author of three poetry collections, including Hands On (2002, ZYZZYVA) and The Aphasia Café (2012, IF SF Publishing). She grew up in Eastern Kentucky and was educated at Princeton University, Union Theological Seminary, and the Columbia College of Physicians and Surgeons. She has won numerous awards, including the 2011 Sarah Lawrence/Campbell Corner Language Exchange Poetry Prize for “poems that treat larger themes with lyric intensity.” McGuire is on the faculty of the Neurosciences Institute at the Morehouse School of Medicine, and divides her time between Atlanta and San Francisco.

Artist Gabe Travis is an artist who makes a living designing and building hiking trails throughout Alaska. He has been making art on commission for about eight years and producing fine art notecards featuring these works (available at www.gabetravis.com).