In her acknowledgements at the end of We Are Meant to Carry Water, poet Katherine DiBella Seluja says:

To my surprise, I am grateful to the outcome of the 2016 presidential election. Without this event, we might not have experienced the intense power and energy that brought forth this book.

Indeed, to be immersed in this book is to feel occasionally almost breathless with the intensity of the collaborative work in this collection of epistolary and persona poems.

Tina Carlson, Stella Reed, and Katherine DiBella Seluja–three poets in Santa Fe, New Mexico–write separately in the voices and personae of Lilith, Leda, the migrant girl, and Helen as well as their own voices. The collaborating poets do not tell us which poet is the maker of each poem in the book, nor do they foreground the mechanics of the collaborative process, thus letting the reader imagine an intimate, unstoppable conversation.

In an interview online with Miriam Sagan at “Miriam’s Well: Poetry, Land Art, and Beyond,” Stella Reed shared that one of the poems, “We are Made of Stars and Footfalls,” is a collaboration in itself, created from a text messaging thread, thus using 21st-century technology to express imagery that would have been alive for women thousands of years ago, but even here the reader will not be able to hear different poets’ voices within the poem:

Let’s dream this return to light
between the hour of dog and wolf.
Words under moonlight, owls watching
from their slick dark branches
hooing to the dark, the crusted moon.

Review of the legends surrounding the characters Lilith and Leda might be helpful to readers. One source for learning about Lilith is a 1993 book titled The Dark Goddess: Dancing with the Shadow, by Marcia Starck and Gynne Stern:

Lilith is always described as a wild woman, living in the desert, close to the birds and beasts. (18) …archetype embodying the deep sexuality… of woman…unable to bear children and no milk in her breasts…beautiful with wings and owl feet…wears a cap embellished by several pairs of horns… a goddess who tames wild beasts and rules by night. (11)

Leda in various Greek legends is believed to be the daughter of one of several kings, mother of Castor and Pollux (the heavenly twins) as well as beautiful Helen (later Helen of Troy). Leda was seduced and raped by the god Zeus, disguised as a swan, and her daughter Helen hatched from the fertilized egg.

The poets write in first person and present tense as those three ancient characters, and approach the character of the more contemporary migrant girl in the same style, thus making the four seem to inhabit together a kind of eternal present. The migrant girl is an archetypal figure who can represent all women on their journeys, physical or metaphorical. As Lilith writes to the girl:

Yes, the world was female
from the first, a welcoming
lap, a garden… Couldn’t bear
the human contract,
to kneel before the man,
sacrifice my voice to his fires…

The poem “You are Migrant” was published at Broadsided on November 17, 2015, accompanied by a sculpture by artist Janice Redman and was part of a folio of work responding to the Syrian refugee crisis. In the poem, Seluja uses repeated phrases, “which is to say” and “in other words,” to set up a relentless forward movement in the poem in contrast to the central image of a woman standing in “a very long line” at the border, “grasping the fist of child you do not know/which is to say you will not lose this child.” One line reads “in other words / please God, praise Allah enough to barter for your passage.” In this collection, the poet has added a new line following it: “in other words, you’ll barter the child if it comes to that,” which adds a quality of desperation to the piece, reflecting the grim reality of the immigration conflicts currently occurring in the US and elsewhere. Both poems end with Lilith’s statement:

The content of We Are Meant to Carry Water is a collaboration, and so is the book as object. The front cover is a photograph by Howard Clarke of “The Nutmeg Princess,” a 1981 sculpture by Lene Kilde of Akershus, Norway, placed in Grenada Underwater Sculpture Park in Grenada, West Indies. Parts of the photograph recur in the book on foldout pages, each with an epistolary poem and its upside-down mirror image on the back of the page. The photographs, a striking design for text and page numbers, and the high quality of the paper all combine to make the book a beautiful piece of art to hold in one’s hands.

Although, as Seluja says, this book was energized by the outcome of the 2016 US election, it does not feel like a response only to that political event. Rather, it portrays a view of the human condition, particularly female, across the vastness of time. The final poem of We Are Meant to Carry Water brings the reader to the present with its darkness and light, ending in a place of shared hope, with the words:

the whole world
in my belly….

…Sanctuary
contains holiness. Your voice
is asylum for mine.

“You Are Migrant,” Broadside with sculptor Janice Redman (published November 17, 2015)

3 Questions from Broadsided; 3 Answers from the poets

Bsided: Now that you have been through the collaboration from concept to publication, what lessons have you learned from the experience? Would you do it again? Why or why not?

Tina Carlson: The collaborative process of writing this book was exhilarating. We created personae who seemed as if they had been waiting to talk to each other for centuries. We found the experience to be like improvisational theater, relinquishing the concept of “this is mine” and embracing instead the bigger world created by the trio of interacting voices. The process was even magic at times: much of the book is epistolary and sometimes the same images crossed in cyberspace in letters written to each other.   I found the entire experience of writing this book with Katherine and Stella to be inspiring and enlivening and I would definitely do it again!

Bsided: Did you have a specific migrant girl or girls in mind for the poem “You Are Migrant?” and how do you envision her “carrying water?”

Katherine DiBella Seluja: Floating above and around the migrant girl, always, is my maternal grandmother, who immigrated to the US when she was eight years old. I was writing about my family’s migration journey as the Syrian refugee crisis was building. “You are migrant” was written specifically as a response to that crisis and also as a response to the overwhelming numbers of children from Central America seeking asylum at the US border. I was listening to an interview with Juan Felipe Herrera on Latino USA. My memory is of Juan encouraging writers to write about what matters to them. I clicked off the car radio and the lines to this poem began dropping into my head.  There are many anonymous migrant girls being addressed here but there are also specific girls, such as Jakelin Caal Maquin who died after traveling with her father from Guatemala to the US. Jakelin carried the “water” of fleeing her country and attempting to request asylum in the north. The water all of these girls carry is so very heavy. This poem is for them.

Bsided: Have you often written in epistolary and persona forms in the past? Do you have other favorite kinds/forms of poems that you think may appear in a future book, either collaboratively or not?

Stella Reed: Many of the poems I’ve written have been persona! I find it powerful to slip inside the skin and voice of another to speak. Wearing the mask of a mythological figure as we did in our book, allowed us to write across time and place. Persona can promote empathy and alter perspective. It can be taken in so many directions. I think of Patricia Smith’s powerful “Skinhead” where she enters the voice of a completely different other, a white supremacist, and in so doing thwarts his narrative.

The Epistle is also a favorite form. Whether a letter is addressed to a lover, relative, supernatural being, the dead, an abstraction, or lamppost, it is a creative way to come into conversation and have a direct dialogue with anyone or anything you can imagine.

I continue to write both persona and epistolary poems for the reasons mentioned. I’m also quite fond of elegies whether they are for a person, quality, or the earth and her other-than-human inhabitants which we are losing at alarming rates. There is much to grieve. Just as there is much to celebrate while we still have time.

Kali Lightfoot’s poems and reviews of poetry have appeared in journals and anthologies, been nominated twice for Pushcart, and once for Best of the Net. Her debut collection is forthcoming from CavanKerry Press in 2021. Kali earned an MFA at Vermont College of Fine Arts. Find her at kali-lightfoot.com. 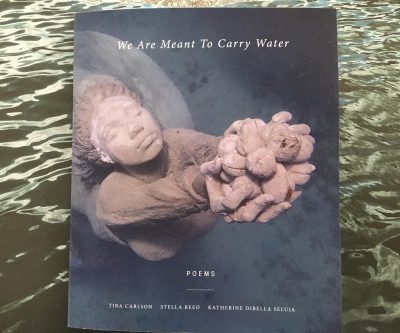