What made you want to submit this work to our Polyphonic feature?
Poet Jeni De La O: I’ve always been interested in the way ideas connect across languages. English is not my first language and understanding that often there is not a 1:1 relationship between concepts across languages has shaped a great deal of my framework for exploring how language is charged with conveying our thoughts and feelings.

In what way do you see your visual response as “Polyphonic?”
Artist Bailey Bob Bailey: Originally, purree was the bright orange yellow substance used to make Indian Yellow, the color of the center of the painting. Later, I was reminded of an early world map I had as a boy. The piece is a perfect circle pushed into an amorphous shape that becomes anthropomorphized. The color is “other,” the shapes are as well.

What surprises you in the artist’s response to your poem?
Poet Jeni De La O: Bob’s abstracted response had me look at the poem with new eyes. I found his use of borders and colors an interesting reflection of Angelitos central theme.

How does a sense of polyphony enhance or challenge your creative work?
Artist Bailey Bob Bailey: For the moment my work is in a constant flux, filled with residual imagery and color. Culture is concrete and hidden memory.
Poet Jeni De La O: Interrogation of language is important. The idea of multi-culturalism or multi-racial/ethnic identity feels flat when presented in one language. Including language linked to the identity under discussion adds a more realistic representation of the topic. If language is symbolism for the things we feel and think, those symbols can come from anywhere. The symbol we need isn’t always present in a single language.

What do you think is the role of art in regards to real-world, real-time events? In other words, what makes a “successful” occasional or political piece of writing or art?
Artist Bailey Bob Bailey: I suspect the best political art hits you over the head like a ton of bricks. Mapplethorpe’s “Man In Polyester Suit” or Lynda Bengalis’ dildo-wielding 1974 Artforum advertisement. Richard Serra’s Abu Ghraib drawing was initiated as a political statement using appropriated news imagery, but it left that world quickly, becoming an image encapsulating terror and torture.
Poet Jeni De La O: I struggle with the idea of relatability or accessibility; sometimes checking for accessibility or relatability of work can feel a bit like slathering ketchup on a filet mignon. Still, part of what makes occasional or commentary art successful is crafting the idea in such a way that you can present something new to anyone who reads it. Two people looking at a Rorschach test will see different images—but both should be able to agree they’re looking at an ink blob.

If the Broadsided collaboration were a piece of music, what would it be?
Artist Bailey Bob Bailey: It’d be a mash up of some sort: old world/new world.
Poet Jeni De La O: “Che Che Cole” by Antibalas

What is your favorite phrase or word translated from a language other than English?
Artist Bailey Bob Bailey: sin verguenza… without shame
Poet Jeni De La O: Ojalá—pronounced oh-hala. Literally a colloquialism of “Allah permitting,” it’s taken to mean “hopefully” when used in modern context—a byproduct of Spain’s history with the Moors. There are lots of words in Spanish with Arabic roots, but I love this phrase because it is living proof our differences aren’t barriers. Ojalá is an affirmation on the lips: we may hope in different Gods, but we are all still humans hoping.

How did you choose the “Vectorization” site for your collaboration (pictured left) and, if anything were possible, where in the world would you most love to discover your broadside posted?
Artist Bailey Bob Bailey: On a billboard in an international airport, say JFK in NYC.
Poet Jeni De La O: I would love to see this broadside as a mural in Eastern Market, Wynwood and Havana.

Read any good books lately?
Artist Bailey Bob Bailey: I finally read Toni Morrison’s Beloved. What took me so long? Incredible book.
Poet Jeni De La O: Currently working my way through Ulysses by Joyce, but I just finished I Can’t Talk About the Trees Without the Blood by Tiana Clark—go buy that book. Wow.

Seen any good art lately?
Artist Bailey Bob Bailey: I just drove cross-country twice in a month’s time. I saw Nancy Holt’s Sun Tunnels in the Nevada desert—it is subtly magnificent.
Poet Jeni De La O: I had the chance to see Margaux Crump’s exhibit “The Lure” in Austin this summer and I still can’t get the piece “Preserving my Desire” out of my head! Aside from that, I’m so fortunate to live in Detroit. The city is full of native talent, and local artists are creating some stunning work. Machine Show at Library Street collective ran last fall and it regularly pops into my everyday conversation. I think that’s what I love most about art in Detroit—you’re living in it, rather than coming to it. Sydney G. James’ work is my heart. I live not far from Eastern Market and I love all the murals, but James’ work cuts right to the the heart. 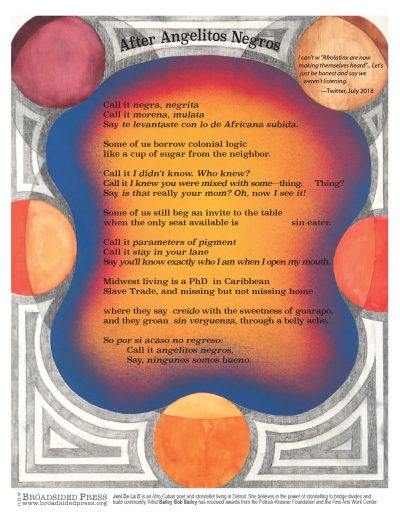 NOTE: This broadside is one of six published for our “In Praise of Polyphony” special feature.

Our literature and lives are enriched when many traditions and languages sing together.  Indeed, multilingualism is, for most of the world, the norm rather than the exception. In this special “Broadsided Responds” feature, we will offer a folio of work that speaks and sings between and with multiple languages.

Jeni De La O is an Afro-Cuban poet and storyteller living in Detroit. Her work has appeared or is forthcoming in Obsidian, Gigantic Sequins, Rigorous Magazine, Fifth Wednesday, Acentos and others. Jeni founded Relato:Detroit, the nation’s first bilingual community storytelling event, which seeks to bridge linguistics divides through story. She is a Poetry Editor for Rockvale Review and organizes Poems in the Park, an acoustic reading series based in Detroit.

Artist Bailey Bob Bailey studied sculpture at Virginia Commonwealth University. He recently had a survey exhibition at the Provincetown Art Association and Museum titled CAVE ORE BRIDGE. Bailey is represented by Ethan Cohan Gallery in NYC and Beacon, NY and at The Schoolhouse Gallery in Provincetown, MA. He lives year round in Truro, MA. Filed under: In Praise of Polyphony, 2018