Did the visual artist refract any element of the poem that made you see the poem differently? What surprised you about this collaborative piece?
Poet Aaron Plasek: The blue hand, the branching tree, the wallet complete with a card I can’t quite make out: these seem like useful objects, but the image of the fingerprint (or finger tip?) is genius. A fingerprint is the proof we leave behind of our presence; it’s what we leave while grasping others and also a means of identification, criminal or otherwise. I wrote the poem nearly four years ago. The time that has passed has made “Dear Wallet” strange to me—like returning to a neighborhood in the city you once lived in years ago and discovering you do not recognize what you once knew intimately. The image of the fingerprint, for me, was a means to rediscover & re-engage the poem, to remember an old self I had misplaced, to reinvent the meaning of the poem—which is maybe what all good collaborations do.

What inspired you to “dibs” this poem?
Artist Kate Baird: I liked the economy of it—there are things implied about at least three different relationships (more if you count relationships with the wallet) and two generations in a very short poem. Even being so succinct, it feels very complete.

What did you think an artist would pick up on from your poem?
Poet Aaron Plasek: Does it sound strange (or annoying or pompous) to say that I didn’t think about this? Years ago I used to run a reading series that paired poets & writers with artists in different mediums, e.g. painters, sculptors, graphic designers, and so on. The authors and artists exchanged work, responded to each other, and then presented their collaborations. I was always shocked and stunned at how the results of these collaborations far exceeded whatever my own poor imagination had anticipated. We can train a dog to salivate whenever it hears a ringing bell by coupling the stimuli of bell-ringing with dog biscuit. Similarly, perhaps I accidentally trained myself to avoid thinking about what an artist might pick up from a poem because I was so utterly terrible at doing it.

What first leapt out at you from the poem and what was your gut response?
Artist Kate Baird: The way the wallet is both a “cleft,” or emptiness and also a (physical and emotional) pressure.

When you begin a piece of visual work (or, if that’s too broad, when you began this piece), is it color, shape, or some other aspect that you follow?
Artist Kate Baird: I started out thinking about how a cleft might be about the same shape as a half-open wallet.

If your poem were a plant, what would it be?
Poet Aaron Plasek: For me, the poem is a bit like the plant that you can extract the drug atropine from—I think it’s called atropa belladonna or deadly nightshade or something like that. Now my understanding of atropine, considering I have no medical training whatsoever, is that it can speed up your heart rate when taken in the correct dosage. When you’re having a heart attack or when someone drops a canister of VX gas on your head, you can stab a syringe of this drug in your heart and hopefully your heart will continue beating. But atropine is extremely dangerous stuff: is what gives the plant the name deadly nightshade. What does any of this have to do with the poem?—Well, writing the poem was a way to deal with several problems I faced then. All the poems I wrote that summer years ago were a way to keep my heart beating. I got several poems written then as a means of therapy that were OK; so it was OK for the purposes of making work. However, for the purposes of therapy, a lot of the poems I wrote then, “Dear Wallet” included, were absolutely toxic to me in the way that atropine can be toxic. “Poetry is an escape from anxiety and a source of it” (Kenneth Koch). Maybe that’s why all the poems I was writing then were so short. Of course, I don’t expect anyone else will necessarily get this from the poem; wasn’t trying to get this into the poem. (Hmmm. I really compared the poem to a drug, not a plant. Is that cheating?)

If your art were a plant, what would it be?
Artist Kate Baird: ?????? Maybe seaweed?

If the Broadsided collaboration were a plant, what would it be?
Artist Kate Baird: Baobab tree.
Poet Aaron Plasek: I was cruising around on Wikipedia the other day and found that lichens are composed of green algae (a plant) and fungi (which I call a plant because I put them in my salad). The fungi protect the green algae and retain water for both while the green algae via photosynthesis make food both need. (At least that’s how I understand it, knowing nothing about biology—remember I just called a mushroom a plant earlier.) The resulting lichen made up of fungi and green algae develops a structure that neither could develop alone. Lichens then are a pretty good analogy for how I think broadsides work: both the poem and image exist in the world, but combined together they become something very different than what they were alone, something that was not possible until they were combined.

What surprised you about this collaborative piece?
Artist Kate Baird: The poem seemed to have such strong imagery embedded in it that I had difficulty realizing it. I had an idea for an image based on my reading of the poem, but then I couldn’t make that image. I thought that because I had an idea going in, it would be easy to execute—it was harder than I expected.

Have you ever written work that has been inspired by visual art? What was that experience like for you? Why were you inspired to do so?
Poet Aaron Plasek: First question: Yes—many times. Second & third question: I suppose, for me, the kind of attention I have when reading a poem is similar to the close attention that I have when viewing a painting or a drawing. So just as attending to poems can beget new poems, attending to paintings, too, can beget poems. So can attending to used tires, well-kept lawns, motorcycle accidents, or space stations. One pleasure, one joy of attending to art instead of those other things lies in how thinking about art can inform thinking about poetry. The work of Duchamp seems very important to how I think about allusion/plagiarism in literature. When I attend Robert Ryman’s completely white canvasses, begin to notice slight differentiation of shades of white, and can find myself moved by such monochrome work—well, that has direct consequences for how I think about language and poetry. By looking at art, visual or otherwise, I better understand my own motives for making poems, or—what is more likely—I come to realize that I didn’t have any understanding of what I thought I did. For me, art provides a chance to rethink what I thought I knew. 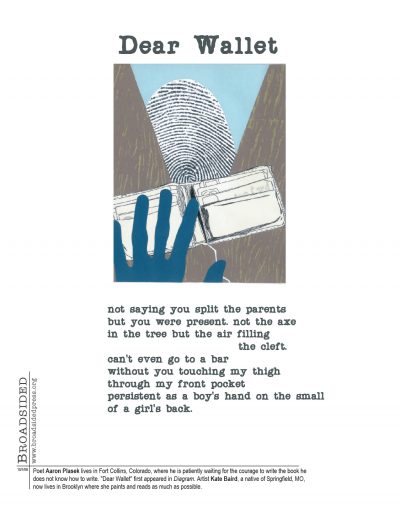 Poet Aaron Plasek: After studying literature and physics at Drake University, Aaron Plasek edited The Dimebag of Poetry and curated the Et Cet*er*a Reading Series in Des Moines, Iowa, and later earned an MFA in Writing from the School of the Art Institute of Chicago. Currently, he provides sustenance for himself as a teacher of writing, but he’s done a bit of everything—including a summer-gig as a research assistant working on particle detectors at the University of Chicago and a week long all-nighter using a four-story-tall telescope to observe quasars. His poetry has cropped up in a variety of places, including Diagram where the poem “Dear Wallet” was first published. Fond of beginning ambitious projects, he is concurrently writing a novel and a collection of poems. He lives in Fort Collins and has dreams that oscillate between erecting a home on a nearby forested mountaintop and building a spaceship.

Artist Kate Baird, a native of Springfield, MO, now lives in New York City where she paints and reads as much as possible.