Note: This broadside is part of our annual translation special feature.  This year’s guest editor is CMarie Fuhrman. We asked her to select two poems—one from a forthcoming publication from Tavern Books, one by a poet writing in a language indigenous to the Americas. We are grateful for her time and vision. Of her choices, she had this to say:

Sometimes when I am walking along the Salmon River in Western Idaho, or hiking through a forested trail near the Wallowa’s in Eastern Oregon, I wonder if the trees and river; the elk, deer, and salmon, ever miss hearing their names.  Their first names, the original names given them by the people to first know them.  I have learned only a little Nez Perce, but I bring those words with me, say them softly to the purple camas, the red-tailed hawk. It is one way to acknowledge to remember. “Two or Three Thousand Years,” by Margaret Noodin and “The Silence” by Igor Barreto, are poems that appreciate not only place, but that which place holds, silence, history, and spirit.  The original words, the indigenous language, hold these things as well, but also a truth and specificity that comes from deep knowing of place, from original knowledge.  I ask as you read these to let the English translations be only a guide.  Let your lips hold the Anishinaabemowin words, let the Spanish fill your mouth and pour out as music, honor these poets and these places by speaking the words, lean into the river, the silence, and know their names.

What surprised you about this collaborative piece?
Translator Rowena Hill: First of all, its existence! And then the images, especially the color, though I like them very much.
Artist Kate Baird: I was intending to make a collage or a drawing—an 2D object of some kind—but in the process of starting to do that I was making and rearranging piles of fragments of drawings, prints, and rubbings, and I got into that activity of piling and overlapping and moving the bits of paper about until it began to seem like this process was the visual translation of the piece rather than any final version I might arrive at.  So I started taking photos as I was piling and un-piling paper, and in the end it was one of these photos of a pile of papers that no longer exists that became the image for the broadside.

Do you see an overlap between the act of translation and the act of responding visually to a piece of literature?
Translator Rowena Hill: The artist is free to have her own reaction—and freer than me according to my idea of the translator’s job. Yes, they are two facets of a sensitive reaction to a piece of writing.
Artist Kate Baird: Sure.  You’re taking something made using one system of meaning and pulling it into another, emphasizing some parts and losing others.  Hopefully you’re keeping some of what animated the original piece and also creating something that has meaning of its own.

Why this poem?
Artist Kate Baird: First off, it’s called “The Silence”– but also because of these bits: “a space filled” and “Inside me a conversation is weaving.”

If this broadside were a type of weather, what would it be?
Translator Rowena Hill: A brooding afternoon, fine but with a change not too far off.
Artist Kate Baird: Cloud formations moving across the sky.

How does translation fit into your creative life?
Translator Rowena Hill: For a long time now (except when I have to accept a non-fiction prose translation for the money) I’ve translated only poetry I feel an affinity with, so it stimulates my own writing.

Read any good books lately?
Translator Rowena Hill: In Venezuela I’m practically limited to what I can get on Kindle. I’m enjoying rereading English classics like Cranford. I found César Aira’s An Episode in the Life of a Landscape Painter very satisfying.
Artist Kate Baird:I took a book of short stories called The Hill Bachelors by William Trevor out of one of those little free libraries on a whim and loved it.

Seen any good art lately?
Translator Rowena Hill: Again, there’s not much chance to see art here. I’ve been interested online in the exhibition of Radical Women Artists of Latin America, of which my daughter is one of the curators.
Artist Kate Baird: I haven’t seen it yet, but I am eagerly anticipating taking in a show of Ruth Asawa’s sculpture later this week!

Anything else? (Here, we invite the collaborators to invent a question, add a comment, or otherwise speak to what the questions so far have not tapped about their Broadsided experience).
Translator Rowena Hill: I would like to mention what an advantage it can be to have a friendly, collaborative relationship with the author like I have with Igor Barreto. I translated most of the poems in The Blind Plain while on my last trip to Europe, and when I returned to Venezuela, Igor came to stay at my house in Mérida and we discussed all the points where I had doubts. We had fun finding equivalents (occasionally substitutes) for the many names of animals and plants of the great plains. 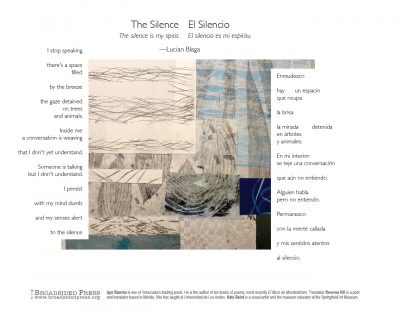 Translations Editor CMarie Fuhrman is the author of Camped Beneath the Dam: Poems (Floodgate 2020) and co-editor of Native Voices (Tupelo 2019). CMarie is a regular columnist for the Inlander, Nonfiction editor for High Desert Journal, and Director of the Elk River Writers Conference.  She resides in the mountains of West Central Idaho.

Poet Igor Barreto was born in San Fernando de Apure, on the plains of Venezuela, in 1952. He is a poet, critic, publisher, and leader of literature workshops. He has published ten books of poems, the latest entitled El Muro de Mandelshtam (Editorial Bartleby, 2017, Spain) and anthologies of his work in Spain and Italy. In 2008 he was awarded a Guggenheim fellowship.

Translator Rowena Hill was born in England in 1938, and has lived in New Zealand, Italy and India. She taught English Literature at the Universidad de Los Andes in Mérida, Venezuela, where she has been based for more than forty years. She has published five books of poems in Spanish and has translated into English some of Venezuela’s best known poets, including Rafael Cadenas, Eugenio Montejo and Igor Barreto, as well as an anthology of Venezuelan women poets.

Kate Baird is a visual artist and the museum educator at the Springfield Art Museum in Springfield, Missouri.  She is also a founder of Placeworks, a multi-disciplinary arts program for rural schools which collaborates with teachers and students in more than 30 communities in southwest Missouri.