Note: This broadside is part of our annual translation special feature.  Our Translations Editor, CMarie Fuhrman, selected two poems—both by poets writing in a language indigenous to the Americas. We are grateful for her time and vision for this annual feature. Of her choices and these broadsides, she has this to say:

Can language be a retreat? A place to go when you cannot physically hide? Or perhaps, as it is for Martín and his multiple languages, it is a way to expose. I have stared long at these twenty-one lines. I want to be able to see the whole of Martín’s world combined with Sandra’s art. The words in Spanish and Náhuatl, though mostly unfamiliar, become a comfort, a place to hide the English and the content of “Like Stones.” But that comfort is exactly what I want to disrupt. It reminds me that in places wholly unfamiliar to me, and for people for who I have let language shield me from understanding, there is still a great deal of wounding, of pain, and fear. English, because I understand it, becomes my world.
Poets like Martín remind me of how small that world really is. Remind me how much we need to engage in translations to support those who, like poet Don Cellini has with Martín, bring focus to the words by offering them in another language. Ultimately, we hope to engage in the universal conversation of empathy, which is increased by reading poets and writers of all languages. Including the art, that great speaker that we can all engage with, that brings yet another dimension to the poem, another sense, more emotion.  Martín’s words call out in three languages, Sandra’s art sings in another, and I want to hear and feel all of them. I want to experience the craft, the lack of hard stops in every line he writes, feel the tone carried across borders, and let the words not retreat but let the passion they all carry find refuge in my being.
—CMarie Fuhrman, Translations Editor

Do you see an overlap between the act of translation and the act of responding visually to a piece of literature?
Artist Sandra Vega: I find myself ‘translating’ thoughts, emotions, experiences through art constantly. Similarly to how we speak in different languages and dialects, we speak in different mediums.
Poet Martín Tonalmeyotl: More than an overlapping, translation is a bridge that links the word from one side to the other and vice versa, a joint act addressed to two population readers. And I think the same thing happens with an image, when the two speak of the same subject, they meet, embrace and walk together.

Why this poem?  How did your visual response take shape?
Artist Sandra Vega: What drew me to this poem immediately was the Náhuatl; while I don’t speak the tongue, it was spoken by my great grandmother during her final days as she reverted to her native language. It was beautifully tragic as her loved ones around her spoke little to none. It is a piece of me I feel I may not get to fully immerse myself in as it is not spoken in my family, only scattered throughout our Salvadoran Spanish. The poem itself is also beautifully tragic, childhood nostalgia tainted by the reality of the world. My visualization came with much ease as I found myself feeling a melancholia set in, imagining what I was thinking as a child blissfully unaware of all that was to come.

Can you share a bit about this poem’s origins?/ ¿Puedes compartir un poco sobre los orígenes de este poema?
Poet Martín Tonalmeyotl: The poem is directed to the Nahua town of Atzacoaloya, Guerrero where before, its streets were filled with all kinds of people, mainly children who played with spinning tops, marbles, a game called rabbits and coyotes (the coyotes catching the rabbits), and playing with a ball until late at night, but the narco-violence came to this Nahua community and the streets became desolate, the screams of the children were muffled, and the sounds of bullets began to be heard; in the evenings only hired killers and hawks, people related to organized crime, had the right to walk or ride motorcycles on these streets. It also became common to hear of missing, dismembered, or murdered people on the streets.

How does translation fit into your creative life?
Poet Martín Tonalmeyotl:  Translation came to me as a necessity, but then it became my primary tool to communicate with the other or with others. I always try to build something new from translation.
Artist Sandra Vega: Translation is incredibly significant in my general life. If I wasn’t learning English from cartoons on television, I was translating English documents to Spanish for my immigrant parents at a very young age. As I grew, I felt a division in the sense where both my Spanish and English were never good enough. Creating through visual means was the only way I felt I could be heard. A way I felt confident in speaking the volumes in my mind.

Do you have a favorite, generative prompt for artists or writers you’d like to share? / ¿Tiene algún mensaje generativo favorito para artistas o escritores que le gustaría compartir?
Poet Martín Tonalmeyotl: I just want to say that poetry written in Náhuatl has the same importance as poetry written in other languages of the world. It is a universal language.
Artist Sandra Vega: When in doubt, make/write/do. The worst that can happen is it doesn’t work, then you try again. I also do many drawing studies of things I’ve seen throughout the day, old pictures, etc.

A note from the translator, Don Cellini, of Ofi Press:
Don Cellini: Martín Tomalmeyotl writes in his first language–Náhuatl–and then translates his work to Spanish. My translations are from his Spanish into English. Translating a new poem is always an exciting challenge. I see my task as the translator as one of creating a new poem in English that is faithful to the original. This new poem, however, must stand on its own as an English poem. There are several challenges: finding the appropriate words in English, maintaining the music of the original in the translation, incorporating idiomatic expressions into the new poem, maintaining the tone of the original. The list could go on. As a poet, l am very respectful of the work of the original poet and want to be faithful to that poet’s intentions while creating the new poem in English. I had the privilege of interviewing Martin Tomalmeyotl and to translate several of his poems for the Ofi Press Magazine. You can read the interview and his poems here:.

If you’re not subscribed to Ofi Press, you may want to add yourself.  All our publications are free  www.ofipress.com. 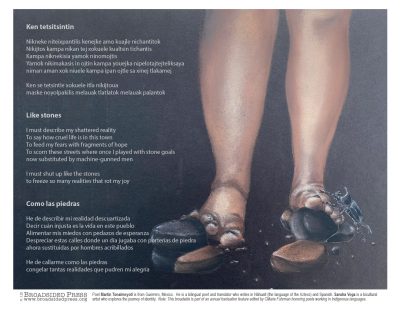 Martín Tonalmeyotl was born in Atzacoaloya, Chilapa, Guerrero in 1983 and is a farmer, poet, translator, broadcaster. He has an undergraduate degree in Hispanic American Literature, a masters in Indo-American Linguistics, and is currently completing a Ph.D.  in American Literature.  He is the author of three books of poetry and has edited two anthologies of contemporary Náhuatl poetry.  Tonalmeyotl writes in Náhuatl in efforts to keep his language and culture alive.

Sandra Vega is a Master of Fine Arts graduate (2022) in printmaking from the University of Alabama. Vega presented her MFA thesis exhibition Cielo Azul, Piel Morena, in March 2022, in the Sella-Granata Art Gallery. In her artist statement, Vega writes, “My work explores the politics of identity, biculturalism, which I define as a state of double consciousness, and an interpretation of otherness. I document a self-defining journey, navigating the hybridity of existing within this duality.”