What is behind your choice of this piece of art in response to the topic “Guns in American Culture”?
Artist Kristen T. Woodward: I’ve been painting on pre-printed gun targets for the past ten years or so. At that time I drove by a gun store on my way to work every morning and was intrigued and perplexed by the Biblical quotes they had out front on their sign. The sign was the kind with moveable type, and it changed frequently.  I wondered if they really did represent what was going on in America.

I had an exhibit with about twenty target paintings a few years ago, and many of the viewers had a strong response to the Female Target.  When confronted by a feminine form, a number of people shifted the conversation to domestic violence.

Why did this piece of art resonate for you or seem like it would give you an avenue into writing about this subject?
Poet Jennifer Perrine: For the last few years, when I’ve written about gun culture, I’ve been thinking mostly about gun violence—how could I not?—and most of those poems swung between the didactic and the esoteric. Very few felt satisfying or honest. “Female Target” brought me out of abstractions, out of lives that I know only through news and public events, and returned me to my body, my relationship to guns. While looking at that artwork, I wrote several poems, remembering how guns have appeared—literally and in conversation—in my workplace, at family gatherings, with lovers and partners and friends. The feminine figure as both target and wielder of the gun made me reckon, too, with what role women play in enabling and perpetuating gun culture, even as so many women are victims of gun violence. So, I suppose it offered an intimacy and a complexity that I’d been missing.

What surprises you in the poet’s response to your artwork?
Artist Kristen T. Woodward: I won’t say I was surprised by it, but I was moved.  She evoked something very primal, but also nuanced.

What do you think is the role of art in regards to real-world, real-time events? In other words, what makes a “successful” occasional or political piece of writing or art?
Artist Kristen T. Woodward: That’s a tough question. I can enjoy the emotional impact of art that is overtly political, but personally struggle when I create a narrative that is too didactic. I think art just needs to reflect the concerns and time of the artist. But great art can also be an escape from the real world.  We surely need it.
Poet Jennifer Perrine: Perhaps it’s not the role, but many possible roles: An invitation to hear another person’s words in your mouth, to taste them, test them for truth. A focal point to draw our gaze back to what we might otherwise avoid. A provocation to further social and political action. A solace when the weight of this moment seems unbearable. A reminder that we are not alone, that someone else has witnessed this, too.

If the Broadsided collaboration were a piece of music, what would it be?
Artist Kristen T. Woodward: Something post-modern and layered… maybe Moby’s “Honey”, which sampled vocals by Bessie Jones.
Poet Jennifer Perrine: “Happiness is a Warm Gun,” as performed by Tori Amos, her voice strange and intimate, layered over news clips. But somewhere just out of earshot, “Hey Joe,” on loop, as performed by The Byrds, Jimi Hendrix, Wilson Pickett, Deep Purple, Red Hot Chili Peppers, Robert Plant, Soft Cell, Cher, and Patti Smith. Only a snatch of lyrics carry far enough for us to hear: “And I gave her the gun / And I shot her.”

Read any good books lately?
Artist Kristen T. Woodward: Can I say I read The Goldfinch by Donna Tartt lately? I didn’t – I read it two or three years ago – but may re-read it because it was wonderful. I just finished Wilderness Tips by Margaret Atwood- also good. And What Painting Is, by James Elkins.
Poet Jennifer Perrine: In the last month or so, all of these poetry books wowed me, some for the second or third or twentieth time: When I Grow Up I Want to Be a List of Further Possibilities by Chen Chen, Into Each Room We Enter without Knowing by Charif Shanahan, Lena: Poems by Cassie Pruyn, 3arabi Song by Zeina Hashem Beck, Hands that Break and Scar by Sarah A. Chavez, Transformations by Anne Sexton, and The Whetting Stone by Taylor Mali. Other recent reads I’d highly recommend: A Monster Calls by Patrick Ness, The Lathe of Heaven by Ursula K. Le Guin, Little Fires Everywhere by Celeste Ng, and We Were Eight Years in Power: An American Tragedy by Ta-Nehisi Coates.

Seen any good art lately?
Artist Kristen T. Woodward:  Delirious – Art at the Limits of Reason, at the Met Breuer. It was a good show, but not deliriously so.
Poet Jennifer Perrine: I recently saw an exhibit of the sets, props, puppets, and costumes made by LAIKA studios for their stop-motion animated films and was dazzled by the meticulous detail of their miniature worlds. I also appreciated the artwork of Horatio Hung-Yan Law that was re-created for a performance of Chistopher Chen’s play, Caught, in Portland a few months back. Part of what intrigues me about both of these (very different) exhibits is the blending of individual craft with a large collaborative effort involving dozens or hundreds of people.

Anything else? (Here, we invite the collaborators to invent a question, add a comment, or otherwise speak to what the questions so far have not tapped about their Broadsided experience).
Artist Kristen T. Woodward: I tend to make art for things that have no words.  Of course, now I cannot get the song Honey out of my head.
Poet Jennifer Perrine: I could not have imagined, before I moved here, that the word “Oregunian” existed, nor that so many people would proudly claim that label and adorn their vehicles with it. Penning that word into a poem helped me pin it to the white privilege—and the threat of white power—that I sense when I see it on display. 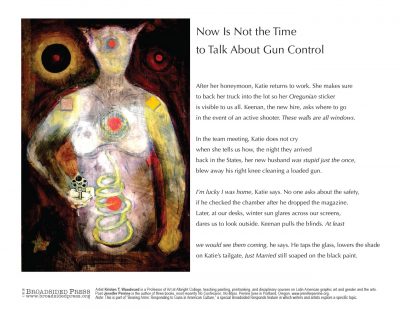 “Now Is Not the Time to Talk About Gun Control” (PDF)

Kristen T. Woodward received her BFA degree in Printmaking from Syracuse University, and her MFA in Studio Art from Clemson University. Her mixed media works combine painting and printmaking, and often utilize found collage materials. Woodward is currently a Professor of Art at Albright College in Reading, PA, teaching painting, and printmaking, and disciplinary courses on Latin American graphic art, and gender and the arts.

Jennifer Perrine is the author of No Confession, No Mass; In the Human Zoo; and The Body Is No Machine. Perrine’s latest work appears or is forthcoming in Pleiades, Harpur Palate, Salt Hill, Literal Latte, and Cream City Review. Recent honors include the 2017 K. Margaret Grossman Fiction Award, the 2016 Publishing Triangle Audre Lorde Award, and the 2015 Bisexual Book Award for Poetry. Perrine lives in Portland, Oregon. For more information, visit www.jenniferperrine.org.