Note: This broadside is part of our annual translation special feature. Our Translations Editor, CMarie Fuhrman, selected two poems—both by poets writing in a language indigenous to the Americas. We are grateful for her time and vision. Of her choices and these broadsides, she has this to say:

This last year was one of foiling distance. Holding each other at arm’s length while still doing our best to embrace. In my lifetime, language—the ability to communicate—was never more important. The last two years have made me even more curious about Indigenous languages, how the landscape formed those languages, and how the language then changed or created the speaker. I wanted to fill the distance between poets and artists and people like myself with words that created bridges of understanding. In something we all shared. There were wonderful and acute differences to be celebrated and so many opportunities to learn about the individual selves. With the help of my friend, poet, and translator, Don Cellini, I was introduced to the work of Hubert Matiúwàa. “Adà/Boy” held such quiet vulnerability and a masking of a different kind that I found important to acknowledge. I also loved holding the words, the Mè’phàà language, in my view as I read Paul’s translation. Here is a land of language I know nothing about, a wilderness of sorts, and even as I cannot know those words, I can know that what is in them connects us. They are doors that, when carefully opened, show us something of ourselves.

The same then is true for “He Lei Māmane no Maunakea” by ku’ualoha ho’omanawanui. In this poem, I am reminded of the language that no human speaks. A language that fascinates and draws us into place even as we can never translate it, the language of birdsong. Of flowers, even. Looking at the poem written in Native Hawaiian, I can read, though I may not understand, the song there. I invite you to whisper it to yourself. Note the “O” your lips form and the kind of song that it is, the way holding the long “e” feels. Poetry joins us always in song. Even as we cannot understand a language, our bodies know the song, the feeling those sounds create within us.

We are so fortunate in this time of distance that sound, even in languages we cannot decipher, from that of birds to that of poets living on distant shores, still unites us. Embrace the multitude of music created, embrace that beauty. In this way, even without arms, we embrace one another.

What surprised you about this collaborative piece?
Poet ku‘ualoha ho‘omanawanui: I was truly moved by the beauty of Michele’s artwork and how it brought the poem alive, particularly for those unfamiliar with Hawaiʻi. Some might be surprised by the snow-capped mountain, one of the meanings of Mauna Kea (white mountain). The palila bird is a central symbol in the poem, and Michele did such a beautiful rendering of this beloved endangered native Hawaiian forest bird and what it represents in the poem.
Artist Michele L’Heureux: From a design perspective, I created the painting thinking that the poem and its translation would run down the left side of the image. I hadn’t considered that the artwork could divide the poem and its English translation, but I really love the way it looks on the page. It gives the palila bird a prominence that feels right, like she’s presiding over or even singing the poem.

Do you see an overlap between the act of translation and the act of responding visually to a piece of literature?
Poet ku‘ualoha ho‘omanawanui: Yes, absolutely! I consider translation not just interpreting meaning in words from one language to another, it is also the act of interpreting meaning from one medium to another. I work primarily with both Hawaiian and English; the first has a long rich history of oral tradition that underwent a transformation into writing in the 19th century—how does one take something spoken, performed, and fluid and fix it in print on a page? The act of translation between languages and mediums is always challenging but worth undertaking–it leads to finding and expanding meanings and sharing with different audiences. I enjoy the challenge of creating poetic equivalency that conveys the aesthetic beauty from one to the other.
Artist Michele L’Heureux: Since I only speak one language fluently, it’s hard for me to know what it’s like to translate something from one’s native tongue to another language. I would imagine that there’s a creative process involved in language translation and a level of consideration and thoughtfulness that rivals the artistic process. When I’m responding visually to literature, I try to conjure imagery that captures the spirit and essence of the poem, not just its actual words; although, sometimes, as in this case, those images are quite literal.

Why this poem?
Poet ku‘ualoha ho‘omanawanui: I really wanted to share a poem composed with traditional Hawaiian imagery that wasn’t just trying to capture the natural beauty of Hawai’i, but that also has cultural, environmental, and political symbolism—the protection of our sacred mountain, Mauna Kea, from development of an unwanted and unneeded thirty-meter telescope. Aloha ‘Aina, lit. “love for the land,” inherently involves protection of the land (what is otherwise considered environmental justice) that has a cultural foundation—as Indigenous people, Kanaka Maoli (Native Hawaiians) have kinship connections to our ‘āina and thus a responsibility to protect it. We also stand in solidarity with other Indigenous peoples worldwide who fight to protect their sacred lands, and all of us who fight to protect mother earth, the only planet we have, thus, the only homeland for humankind.
Artist Michele L’Heureux: I am a bird fanatic and I had never heard of or seen an image of the palila bird, so I was eager to research it. I have only been to Hawai’i once, but its lush landscape speaks to me. I love the spiritual nature of this poem, too, especially imagining the guardians relaxing and listening to the sweet voice of the palila bird. That image is really tender to me.

If this broadside were a type of weather, what would it be?
Poet ku‘ualoha ho‘omanawanui: Bright sunshine, cool mountain air, and a light mist dancing through the forest on Mauna Kea.
Artist Michele L’Heureux: Sun and mist and warm breezes.

How does translation fit into your creative life?
Poet ku‘ualoha ho‘omanawanui: Translation is all about creativity, both in the challenge of finding meaning in one language from another and in interpreting meaning from one medium to another. I regularly work between translating languages (primarily Hawaiian and English, but I also read in French, Tahitian, and Arabic), and between artistic mediums, such as watercolor, acrylics, music composition, and occasionally photography and text.
Artist Michele L’Heureux: Making art is a process of translating my unique vision of the world into something visual that I can share with others. It’s a difficult and tricky process at times to translate what’s in my mind’s eye into some physical form that does justice to the ideas, concepts, and vision I want to share. I have to find the right language and tools with which to translate, and those will differ depending on the project.

Read any good books lately?
Poet ku‘ualoha ho‘omanawanui: I always have a stack of unread books piling up! I’ve been reading a lot more on the topic of Indigenous storywork and wonderworks recently, and Jeannette Armstrong’s Indigenous Storyworks is a particular favorite. I’m also reading more Indigenous speculative fiction, and just finished the first book of a five book series from New Caledonia, Sosthene Desanges’ Ash & Vanille.
Artist Michele L’Heureux: I’ve been delving into the topics of memory and trauma, and I’m making my way through two books that look at these topics from both scientific and poetic angles: Trace: Memory, History, Race, and The American Landscape by Lauret Savoy, and It Didn’t Start with You: How Inherited Family Trauma Shapes Who We are and How to End the Cycle by Mark Wolynn.

Seen any good art lately?
Poet ku‘ualoha ho‘omanawanui: I am a big fan of Tahitian artist Sabrina Birk. Recently she’s shared images online of a “Walk of Art” exhibit in Tahiti by local artists. The Honolulu Museum of Arts current exhibit, “Artists of Hawai’i NOW,” is also amazing and thought-provoking. I did get to the “Beyond Van Gough” exhibit this summer when it came to Honolulu, and found it a very moving, impressive way to experience art and hope to see other artists have their work displayed in this way.
Artist Michele L’Heureux: Most of my art viewing is still taking place online these days. I’m excited about discovering Motion State Arts, a Rhode Island-based organization that promotes dance films, a genre that I was unfamiliar with until recently, when an artist friend produced a performance film. I’m obsessed with the multidisciplinary nature of this genre, which involves movement, performance, puppetry, animation, music, and so much more.

Anything else? (Here, we invite the collaborators to invent a question, add a comment, or otherwise speak to what the questions so far have not tapped about their Broadsided experience).
Poet ku‘ualoha ho‘omanawanui: I am honored by the opportunity to collaborate with Michele L’Heureux and get acquainted with her beautiful art! It’s also a thrill to work with a fellow bird lover and experience how a love and appreciation for nature inspires different artists.
Artist Michele L’Heureux: I am now on a mission to see the palila bird in person in my lifetime. I’m so grateful for the introduction, ku‘ualoha ho‘omanawanui! 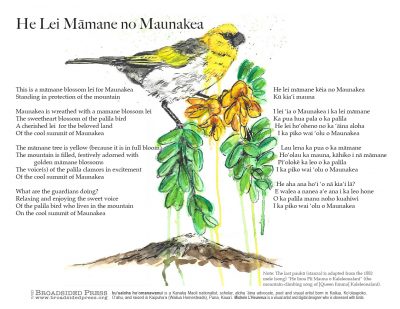 ku‘ualoha ho‘omanawanui is a Kanaka Maoli nationalist, scholar, aloha ‘āina advocate, poet, and visual artist born in Kailua, Ko‘olaupoko, O‘ahu and raised in Kaipuha‘a (Wailua Homesteads), Puna, Kaua‘i. She specializes in Hawaiian and Oceanic literatures, place-based writing, and indigenous literacy. She is a former Ford Foundation pre-doctoral and doctoral fellow and a Mellon Hawai‘i post-doctoral fellow. Her artwork, poetry, and short fiction in Hawaiian and English have been internationally published and translated. ho’omanawanui is also a founding and chief editor of ‘Ōiwi: A Native Hawaiian Journal, which features Native Hawaiian writers and artists.

Michele L’Heureux is a visual artist and digital designer who is obsessed with birds. Artist Michele L’Heureux Vectorizes on a water bird interpretive sign on the shore of Lake Hunter, which she visits near-daily.

Editorial Note on the Annual Translation Feature: Broadsided has Vectors everywhere, and poetry and art speak across cultures, bridging and enlarging them. The very nature of an artist responding to a visual work is an act of translation.  To deepen this awareness and conversation, we began offering regular translation features at Broadsided in 2012.

In 2014 we refined that vision to showcase poets of the American Continents writing in their Indigenous/First Languages.  Interviews and photos of the broadsides shared in public spaces within the poets’ and artists’ communities show how poetry and art, as part of our daily lives, can create awareness and understanding, deepen connection to other cultures, and broaden our literary communities.

Translations Editor CMarie Fuhrman is the author of Camped Beneath the Dam: Poems (Floodgate 2020) and co-editor of Native Voices (Tupelo 2019). CMarie is a regular columnist for the Inlander and Director of the Elk River Writers Conference.  She resides in the mountains of West Central Idaho.